Love Is Love (Not Flamboyant Displays of Sexuality In The Streets)

On Friday, the United States Supreme Court ruled that individual states cannot keep same-sex couples from marrying. A historic event, that sweeps across all fifty states and gives homosexual couples benefits of marriage that they've been seeking for decades. 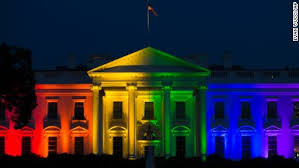 While not everyone is happy about the Supreme Court's decision, much of the country erupted into celebration. Social media platforms, Disney World, and even the White House (in an arguably taunting in-your-face-opponents attitude) lit up with all the colors of the rainbow. And people took to the streets with all kinds of revelry.

Conveniently, San Francisco and New York each had their ginormous annual "Gay Pride" parades scheduled for Sunday. It was the cresting of a wave that started to surge on Friday with the announcement of the Supreme Court decision.

Droves of rainbow-clad celebrants took to the streets in a style reminiscent of college game day victories... only on a bigger scale. Alcohol flowed. Team colors were sported. Shouts of victory erupted. The opposing team was mocked.

Not to be left out, the weirder side of Gay Pride was parading around (see what I did there?) for all the world to see. It's not every day that you get to see muscled men waltzing through midtown Manhattan in spandex and high heels.

But still, there was enough skin-tight leather, deep throat tongue-kissing, and flagrant sexual gestures to make even least prudish people a wee bit uncomfortable. (Just because you CAN do it, doesn't mean you SHOULD do it.)

Here's the deal, guys... You're all legal now. Just part of the humdrum married life that heterosexuals have been slogging through for centuries. Just put on something a tad frumpier (and therefore more socially acceptable) and look boring like the rest of us. Outlandish and flamboyant behavior is no longer necessary.

You've been telling the world that this whole marriage equality thing isn't about sex... that it's about love and commitment and raising a family and growing old together (the tax breaks and partner rights are just a side perk, I'm sure). That's great, and I hope it's true. But if it is... there's no need to flaunt your sexuality all up and down 41st street. There's no need to pretend to butt-hump every surrounding male participant. There's no need to dance the tongue tango with your partner in front of gawking on-lookers. There's no need to get yourself gussied up in your best strappy leather bondage outfit and walk down the middle of the street.

And, my god, please!  There's no need to publicly sip your beverage from your penis-shaped tumbler!

If it's not about sex, stop making it about sex. Keep your bedroom activities in the bedroom like normal married people. It doesn't belong hanging out in the streets for the whole world to see.

Don't you get it? You're mainstream now. You can start acting like traditionally married people. Because all of these blatant displays of human sexuality are making me and a lot of other people uncomfortable (in the way that maybe only a forty-something mom can be). I assure you it's not homosexual displays of lust that grate my nerves like fingernails on a chalkboard. If I saw that same kind of displays of heterosexual 'love' marching across the evening news, I'd feel just as uncomfortable. My dinner would still be threatening to make a reappearance.

My point is that you aren't doing yourselves any favors by strutting around looking like freaks and flaunting your sexual urges. You've been too busy for too long insisting that you're all normal and acceptable and there's more to gay love than sex. So start acting like it. If you don't want to be treated like freaks, then stop acting like freaks. (Unless you really enjoy the struggle for acceptance that has basically defined you and you aren't quite ready to give that struggle up yet. Perhaps you enjoy feeling different and unique. In that case... carry on.)

You'll never see me prancing around in public wearing nothing but a thong, allowing my husband to mimic copulation in the streets, while my children smile and wave flags. (What would be the straight version of a gay pride flag, anyway? Something appropriately symbolic. Something that sums up our normal mundane lives. Maybe some sample upholstery swatches from IKEA attached to some wooden craft sticks? Perfect!)

I'll grant that you deserve one giant drunken flamboyant party to celebrate a long struggle for acceptance. But here's the deal: You've won. But if you expect to be accepted into the mainstream, you're going to have to tone it down and become a little more... boring, or you're never going to make it at the typical married-life neighborhood dinner parties.

On a final and mostly related note, if gay is truly who you are, the way you are born, is it really something to be proud of? Pride is defined by Websters as "a feeling or deep pleasure or satisfaction derived from one's own achievements." What have you achieved by being gay?

George Carlin summed it up rather nicely. "Pride should be reserved for something you obtain or achieve on your own, not something that happens by accident of birth. Being Irish isn't a skill... it's a genetic accident. You wouldn't say I'm proud to be 5'11"; I'm proud to have a predisposition for colon cancer."

Reserve your feelings of pride for your talents and skills, for what you give back to Society, for the positive things you've accomplished, for things of real value. Strutting around flaunting like you've been doing isn't pride at all... it's just arrogance.

Gay pride makes it sound like a lifestyle choice.  And isn't that what you've been fighting against for decades?  Think, people!

And before you jump on here and flame me for my intolerance and whatnot. I do realize that not all homosexuals are running up and down the street throwing Skittles and dressing like the Village People. It's unfortunate that it's the racier, crazier, more disturbing images of homosexuals that make it onto our television screens. Maybe it's because the normal ones blend in too well. Because they really are "just like us".