Homeschooling and the Common Good

Monday was back-to-school day for a lot of kids across the country (or as many parents like to refer to it, The Most Wonderful Time Of The Year). It's no surprise that leading up to the infamous first day of school the Raleigh News and Observer would run an op/ed piece on the growing number of homeschoolers in my home state of North Carolina. (Last year there were 60,590 registered homeschools in the state.  That's a 27 percent increase since 2011.  So... wow.)

In the article, North Carolina Homeschools and Abandoning The Common Good, author Leslie Maxwell expresses serious concern regarding the increasing number of families leaving the public education system in order to educate their children at home.  She seems particularly concerned about fewer parents volunteering their efforts to improve the school system, since those parents would instead be investing their energy into the education of their individual children.


"The problem is seeing opting out of the system as a solution. Instead of looking for solutions within the system, these parents remove themselves and their students, making it more difficult for the school environment to improve for other students. What do these children learn about community?

While it's tempting to think that the author wrote the whole piece just so she could use the word "solipsistic" (the theory or view that the self is the only reality.  I know.  I had to look it up, too), it's possible that she is genuinely concerned for the students trapped in the failing public school system of North Carolina.  Perhaps she truly believes that the cure for the numerous ills (violence, drugs, drop-out rates, illiterate graduates, teen pregnancy, complacency, etc) of compulsory public education lies in my ability to donate brownies to the local PTA bake sale. 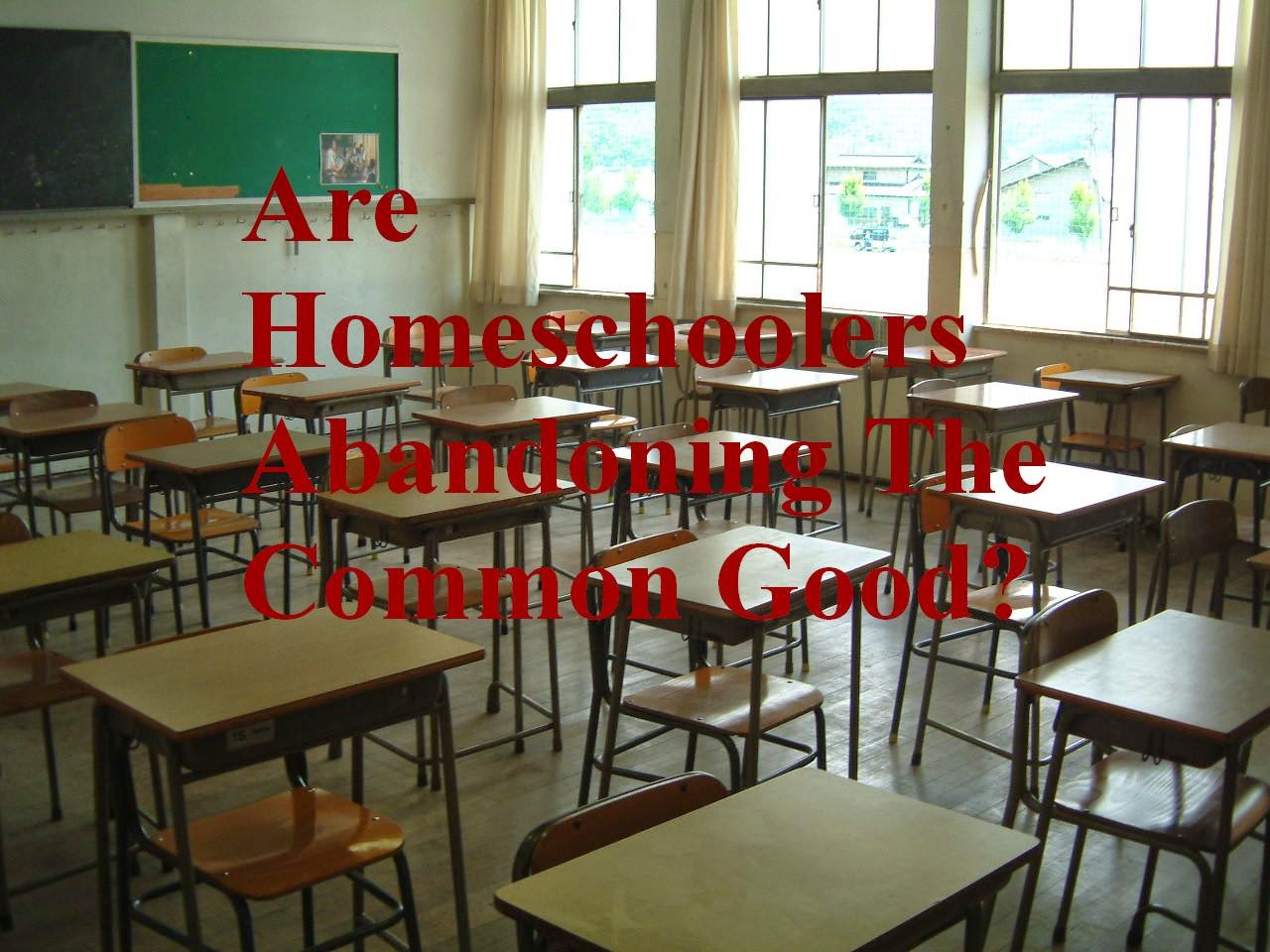 Which leaves me wondering if Ms. Maxwell has actually set foot in a public school recently.

It might be necessary for me to point out to Ms. Maxwell and anyone else out there who isn't familiar with the current state of our country's public education system, that education reform has been the rallying cry for political hopefuls for decades now with little effect on the system at large.  We as a nation have thrown billions of dollars and thousands of pages of legislation at cancerous problems that just keep growing at a rate akin to a teen-aged growth spurt (but without all of the unsightly acne).  I will refer once again to illiteracy rates and drop-out rates and school violence and teen pregnancy and drug use and, and, and.

Ms. Maxwell, I've seen the village and I don't want it raising my child.

No.  I won't sacrifice the well-being of my children for the sake of maybe possibly kinda sorta making a difference in the educational experience of someone else's child.  I'm kind of selfish that way.  My bake sale brownies (while admittedly fabulous) wouldn't even scratch the surface of the reform that needs to take place in a system that needs to be totally dismantled.  (If you think I'm being a BIT overzealous, you haven't read enough John Taylor Gatto or John Holt).  Kids attend public school for what? ...like twelve years?  That's not enough time for Superman to fix what needs fixing.

I'm not trying to hurt anyone's feelings or make them feel inferior for sending their kids to public school.  I'm a product of the public school system, and I turned out okay (although some of the harsh critics that bombard my email inbox emphatically believe otherwise).  I get that homeschooling isn't a viable option for a lot of families.  But I'm not going to sugar-coat the massive failings of the system just to keep people from getting their feelings hurt, either.

But are homeschoolers abandoning the common good?  I would argue that investing energy into the molding of  intelligent, well-rounded, free-thinking individuals does an awful lot for the common good.  Developing citizens that don't always blindly follow the rules and are experienced problem solvers also contributes volumes to the common good.  Even if homeschooling isn't churning out adults with the same rapidity as the public school system conveyor belt, perhaps the end quality is better.  And quality trumps quantity almost every time (Unless you're Walmart... or attempting world domination... which Walmart might actually be doing).

I could keep name dropping, but I think you get the idea. What would our world look like without the out-of-the-box thinking of these great individuals?  Seems they contributed quite a bit to the common good.

Of course it's true that these people might still have accomplished wonderful things if they had been stuffed into our cookie cutter one-size-fits-all public education system.  But perhaps not.

Recent studies and statistics point to the effectiveness of homeschooling (at least in a general sense) for producing intelligent well-adjusted human beings.

And if that's not enough, I will also remind everyone that as much as I would love to completely abandon the system, my tax dollars still fund the public school system whether my children participate or not.  So maybe the powers that be can do something for the common good with my property taxes.  Because I'm too busy over here investing my energy in the raising of decent human beings.

thank you once again for pointing out the obvious - the system is afraid it is losing control over us... I have to face this in Estonia (quite far away from your place :) ) because here it is literally weird if you go and place your request that you really want to homeschool your child... but the reality is changing, the world in on the verge of changing and this gives us hope... we can do it! and we do not apologize and explain the desire to be different!

It's true. I do think we are on the verge of changing. Thank you for your supportive words. It's always nice to "meet" someone else who is brave enough to be different, even when that person is halfway around the world.