Why It's Great To Be An Adult

This week has sucked. True story.

Just as winter decided to come smashing it's way across North Carolina, leaving in it's wake frost and freezing temperatures and people dressed in mukluks, our HVAC unit died. Repair people were called in and several hundred dollars later we had heat... for about 12 hours and then nothing. Nada. It just hums. The diagnosis now has something to do with new duct work... which sounds expensive.

To add insult to injury, our minivan is in need of a new transmission... which also sounds expensive.

AND the holidays are coming which means we will be expected to play Santa and cook turkeys and entertain guests... which is also expensive.

I'm not liking this adulthood thing right about now. I'd really just like to hide in my blanket fort (I wonder if it's warm in there) and forget everything. Maybe refuse to come out until someone buys me a pony or at least an ice cream cone.

When adult responsibilities barrel in like bulldozers and the stress levels run high, it's difficult to remember that being an adult has it's perks. Don't laugh...it's true.

Here are the biggest perks to being an adult, just in case you're like me and life is chucking lemons at you with surprising speed causing you to forget just how cool it is to be an adult.

1. You can eat ice cream or candy or cookies for breakfast! Of course, your conscience probably won't let you (Stupid Conscience!). And if you have kids, you'll probably need to lock yourself in the bathroom to eat it while pretending to take a shower. Just ignore the pounding and screaming at the door.

2. You can stay up as late as you want! No bedtime. No parents getting on your case. Pure freedom! ...But don't stay up too late or you'll be the miserable kind of tired that even the strongest coffee can't fix. There's that whole work BS you have to deal with.

3. You don't have to clean your room! No, but you'll probably want to... especially if your mother-in-law is coming over.

4. You don't ever have to take another standardized test! ...You will however have to file income tax returns... which have horrible consequences should you do them wrong. I've been audited. It sucks. A lot. I'd rather take the SAT.

5. You can have sex where ever you want and not have to worry about being caught! ...Unless you have children. Then you'll still have to be sneaky about it.

6. You can buy your own wine, beer, and liquor! Which is a good thing because with all of the bills and responsibilities and crushed dreams of adulthood, you're going to need it. ...But the hangover is going to SUCK!

Isn't it great being an adult?

If you need me, I'll be hiding from my bills in the blanket fort with this magnum bottle of Malbec... 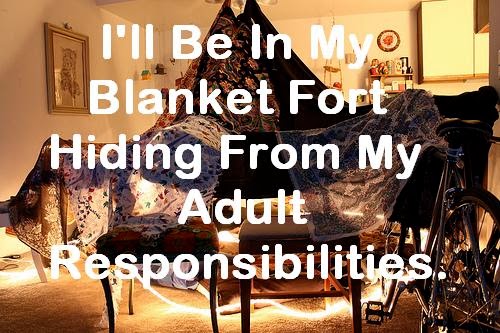 Don't forget you can watch TV all day long in your PJ's but unfortunately it would wind up being something like Angelina Ballerina or Bob the Builder. Because really you don't want to watch to much CSI with the kids around!

Brilliant, Crystal! Why didn't I think of that?