One Quiet Voice For Compassion - #1000Speak 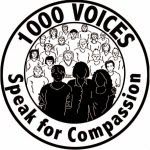 Last month, I signed up to participate in an event called 1000 Voices for Compassion, a brilliant idea to get at least a thousand bloggers to write about compassion, kindness, support, non-judgement, etc. on one day. With all of the horrible acts of violence and terror in the news, a few bloggers thought it would be nice to flood the internet with some good warm and squishy feelings to counter (even if only slightly) all of the ickiness that gets so much media attention.

Shocking, isn't it? That sarcastic and cynical ol' me, would willingly volunteer to write about something so positive?

Compassion comes in all shapes and sizes, and sometimes it comes wrapped in a tough and grumpy exterior.

I will admit that the subject has been a hard one for me. I tend to have a life-is-tough-so-suck-it-up kind of attitude, but it's difficult for even the most cynical and hard-nosed person to watch what's going on in the world and not think, "Hey, there's some pretty messed up human beings out there doing some pretty messed up things to other human beings. Maybe we all just need a hug."

The problem is that we often have a hard time seeing each other as human beings. We've been so divided and compartmentalized and categorized that it's difficult to see how very alike we are. It's too easy to look across the dividing lines of race, religion, income, education, gender, nationality, sexual preference, etc. with an us-versus-them mentality. It's too easy to dehumanize people who are different than us.

This past Sunday, I was driving with my children to Virginia. The trip is one we make often to visit my parents, one that has us winding through some of the poorest stretches of two-lane back roads of rural North Carolina, past ramshackle falling-down houses that look cold and desolate and almost abandoned if it weren't for the laundry strung out to dry or the puffs of wood smoke chugging from crumbling chimneys.

We traveled along with the heat cranked up, singing along to the music on the iPod, all of us in pretty positive moods, when toward us on a long stretch of NC 11 came flashing blue lights. A single solitary sheriff's car leading a long black hearse and a stretch of mourners that was at least a hundred cars long.

It was a black funeral. Notorious in this part of the South for just how many mourners turn out. There is a sense of community that some of the rest of us seem to have forgotten, proven by the sheer numbers of vehicles slowly following that dark hearse through the countryside, packed with the grieving decked in their Sunday best.

"Pull over, Mom," insisted my oldest son from his shotgun seat.

I was already pulling the car to the gravel shoulder and slowing to a stop when the procession reached us.

My son, almost nineteen, quietly opened the passenger door and stepped out of the car. He walked solemnly to the front of the car, removed his hat and placed it over his heart.

He stood there in a silent salute, an acknowledgment of the loss of strangers, a somber display of respect, a recognition of human suffering. The passengers of the passing cars all turned to look at him, some in shock and disbelief. A few tipped their hats or waved a hand, but everyone saw him standing there in all of his white male privilege, in a place that is still often rife with racial tension. They saw him, one lonely teenage boy, standing with them and seeing their grief.

It was a truly beautiful moment, and I'm honored to have witnessed it.

I am in tears at the beauty of his actions. I can only hope my kids will be as honorable. <3