I Am Responsible For The Gender Wage Gap 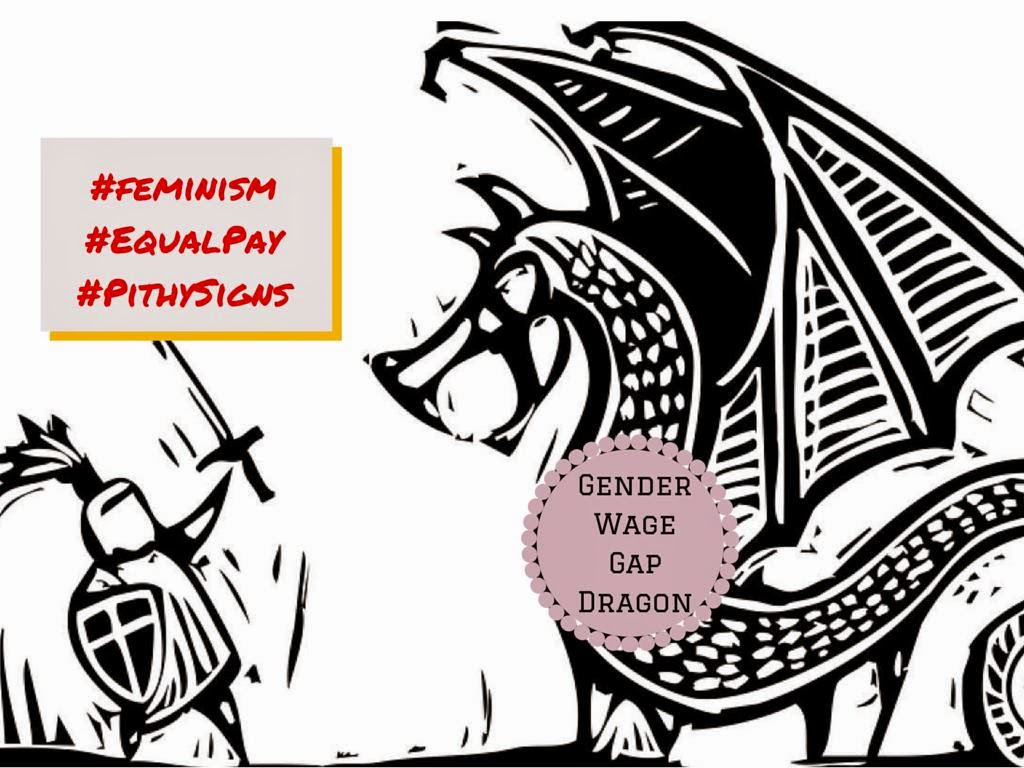 That raging monster, The Gender Wage Gap (a snarling, filthy, highly unfair beast to be sure) is probably the major rallying topic for modern, third wave feminists. They emerge from the woodwork with their pithy signs and Twitter hashtags and righteous indignation making futile attempts to slay this foul creature.

They shout, "Sure women have the right to vote, but we still make an average of 77 cents to a man's dollar."

Which is actually horrible. Who wouldn't want to arm themselves and attack such a glaring injustice to half the population?

Except it isn't exactly true.

The mythical beastly Gender Wage Gap does contain at least a grain of truth (just like most myths). Well-meaning feminist activists wage battles based on a study that compared both men's and women's workforce pay and found that men are making at least 25% more than their female counterparts. But just wait a minute before you pull out your righteous indignation.

If we drop our pithy signs for just a moment and listen to actual economists (instead of just the emotional shouting of those who feel they've been wronged), a very different picture begins to emerge.

Professor Steven Horowitz (don't hold it against him because he's a man) of Saint Lawrence University breaks it down nicely in his talk, "Do Women Earn Less Than Men?"

"If you add up all the incomes of women and divide by the number of women in the labor force, then do the same thing for men, what you'll find is, on average, women do make about 75% of what men do."

*Cue internet feminist shouts of "I told you so!"

But wait! Dr Horowitz goes on to clarify, "What's happening here is not discrimination in the labor market, but differences in the choices men and women make... that lead to them getting paid different salaries."

Hold off on the chants of "Equal Pay For Equal Work!" Because that anger inducing study isn't comparing apples to apples at all. It's not comparing equal work at all, only the total summation of both men's and women's combined earnings - regardless of educational background or field of employment, or job experience.

Women typically pursue education in fields like education, humanities, nursing, etc., statistically lower-paying career fields. While men tend to pursue careers in science, engineering, and other STEM fields, statistically where the big bucks roll in. Add in the fact that women's careers tend to be more frequently interrupted for family reasons and that women also choose part-time employment (again with the pesky family obligations) more often, and you start to see why women aren't generally at the top of the income scale.

Interestingly, when women and men with similar educational backgrounds, in similar fields, with similar levels of experience are compared, that Gender Wage Gap virtually disappears. Poof! Like the mythical dragon that it actually is.

Here is where I issue my public apology, an apology for my hand in creating this controversial issue of feminist angst.

I am sorry that even though as a high school student, I showed great promise in the fields of science and math, even though I passed AP Calculus as a senior in high school, had an outstanding GPA, and a much higher than average SAT score, I did not pursue higher education in a STEM field. Instead I chose Music. I placed a higher value on personal fulfillment and creativity than on income. For that I am truly sorry, my sisters.

I'm also sorry that when baby #1 came along, instead of chugging through in pursuit of career advancement, instead of attempting to smash through the glass ceiling, I removed myself from the workforce. I chose to focus my time and talents and energy on raising a family. I'm sorry that I put the needs of my family above earning a significant income. I'm sorry that I once again chose personal and family fulfillment, as well as peace of mind and a focus on the more spiritual aspects of life over career success and a respectable income.

And I'm sorry that when I returned to the workforce more than ten years later, I didn't jump feet first into a high-paced and stressful career track. Instead I chose part-time employment that was flexible enough to keep me home with the kids during the day. I hope my fellow women can find it in their hearts to forgive me.

Even now, I'm sorry that instead of returning to school and pursuing a higher level degree in a fast-paced high-paying field, I instead choose to continue in part-time work while trying to eke out some personal fulfillment in pursuit of a writing career. Shame on me. Where are my priorities?

I am responsible for the gender wage gap. And so are all of the other women that make choices that ultimately lower their income earning potential.

So, Ladies, if you really want to do something to slay the Gender Wage Gap, it's going to take more than hashtags and internet ire or even legislative lobbying. If you want to do something about the Gender Wage Gap, go into a STEM field. Become a doctor or lawyer or engineer. Don't major in art history, or womyn's studies, or music. That's not going to make you any money. Screw job fulfillment. Screw doing what you love. Screw making a difference. Screw being there for your kids. All that matters here is money (and that's the area where men have set the bar rather high).

And while you're at it, you should be encouraging your sons and husbands and boyfriends to pursue careers in those lower-paying typically female jobs like teaching, and social work, and nursing. Because if that Wage Gap is going to be closed, both sides are going to have to meet in the middle. Everyone is going to have to make sacrifices.

What bothers me most about this whole wage inequality bull crap is that society is still holding men up as the gold standard. Men are making more money than women and that's just not fair. But what if we consider for just a moment that maybe women (in a very general sense) have figured something else out? What if there is more to life, more to success, more to happiness than money? Maybe women have been faster to figure out things like career satisfaction, the value of time and personal relationships, well-being, and that foggy third metric of success. If men are lacking those things in their work, then perhaps they are the ones suffering the greatest of inequalities. Maybe men should be the ones taking up arms.

And boy are they going to need a lot of hashtags and pithy signs.

In the meantime, I'll just be over here laughing and playing with my kids... maybe writing some poetry or making music... even though nobody is paying me to do it. I'm such a slacker.

Posted by ajoneswebb at 8:52 AM