Today I am the meanest mom in the world. Right now, my youngest child is writhing in agony on the floor because I am so horribly mean. I would probably be horribly ashamed of myself if I weren't slightly amused by her misery.

I'm a terribly, nasty, vile human being because... I'm forcing her to walk the dog and complete one household chore before I'll allow her to waste time on any electronic device.

I mean seriously, I already forced her to eat breakfast and finish schoolwork. I also required her to get dressed and brush her hair. Oh, the horror of my maternal torture! 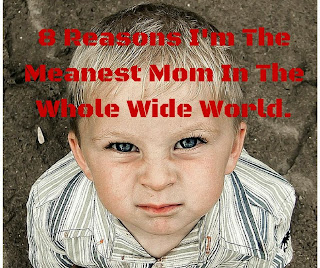 But that's just the torment I've inflicted this morning. My children keep an entire list of reasons I am the meanest mother in the world (if not the whole entire universe).

1. I make them pay for their own stuff. Horrible, right? That's the way the adult world works. Because I don't want my kids living in my basement for the rest of their lives (You might think this is me being mean, but you're wrong. It's dark and moldy and gross down there), so I make them pay for the toys and gadgets and other stuff they want. I even make my teenagers pay for their own cell phone service. (Gasp!) I want them to realize that things have price tags and aren't just handed out as favors from the universe. I also think that if they pay for their stuff, they'll appreciate it more and maybe take better care of it. I figure if they aren't willing to spend their own money on something... they probably didn't want it all that badly in the first place.

2. I make them do hard things. Life isn't easy. Especially the things in life that are worth accomplishing. I don't automatically step in and take over when things get hard. I've watched them struggle through difficult belt tests in karate. I've stood by as they've had difficult confrontations with significant others and best friends. I've watched them struggle through the sometimes difficult consequences of their own bad decisions. And as much as I've wanted to throw on my Super Mom cape and swoop in to save them, I've stood by watching and biting my nails in stress in frustration instead. Sure, I've shouted encouragement from the sidelines, but I've let them struggle because I sincerely believe that working their way through the tough stuff will make them better people. Callous, aren't I?

3. I make them do chores... for FREE! I don't believe in paying my kids to help out around the house. It's my opinion that as members of this home, they should all pitch in to ensure its smooth functioning. Everyone who lives here helps keep this family running. That means the kids often take out the garbage, wash the dishes, fold laundry, pull weeds, sweep floors, and feed pets. And I don't pay them any cash money to do it. I might seem like an insensitive, abusive slave driver breaking all kinds of child labor laws, but if they don't help, that leaves me doing everything... and nobody's going to pay ME to do it.

4. I gave them watches and alarm clocks. They are responsible for getting to school or work or other obligations (including curfew) on time... not me. If they end up late, they will harvest the consequences. I feel like they'll be better off in the long run if they learn the responsibility of managing their own time. I'm not always going to be available to remind them to turn off the TV, put on pants, and get to where they need to be.

5. I let them feel loss. When they break or lose their things, I don't replace them. I'm just that mean. Instead, they have to deal with the consequences, either replacing it themselves or going without. There's a valuable lesson about taking care of things that matter which can't be learned without suffering through losing something. This goes back to learning responsibility. I admit that the side benefit to responsible kids is having them constantly remind me of things I forget... like my car keys. Where did I put those again?

6. I limit screen time. As much as they would like to waste away their lives and their health staring mindlessly at an electronic screen (whether television, computer, or tablet), I am constantly thwarting their plans. I step in to remind them that there is a life worth living away from the computer. They think I never let them do anything, but I still feel like I let them turn their brains to mush with passive entertainment far too frequently. Still, I make them interact with real human beings, and get fresh air, and exercise body parts other than their rapidly texting thumbs on a daily basis.

7. I stick by age limits. Most of our family's age requirements were determined with child number one (A.K.A the Parenting Guinea Pig), but we stick by our guns. No riding in the front seat until age 12. No social media accounts until age 13. No solo dating or rated M video games until age 16. This one might be hardest on the kids because "all of their friends are doing it", but I'm not raising a herd of lemmings. I'm not jumping off that parental bridge, and I don't want my kids going down with me. Besides, it gives them milestones of sorts to look forward to. It also helps me from falling into that alluring pit of the double standard. "You let my brother do that at 15!" will not happen if they are all held to the same age requirements.

It's been a delight to watch them on those milestone birthdays as they ride shotgun for the first time or carefully plan out their Facebook profiles months in advance. I'll admit there is a part of me (perhaps a very naive part) that because they've respected their parent-enforced age limits, hopes they'll respect other (arguably more important) age rules in regards to alcohol and such. We'll see how that turns out.

8. I hug them before bed. Every. Single. Night. Whether they like it or not. Even the 19 year-old. Because I love them... which is really the reason behind all of the things that make me The Meanest Mom in The Whole Wide World.
Posted by ajoneswebb at 2:30 PM

I am glad I am not the only meanest mom in the world! I tell my kids all the time I am the WORST!! Haha

Sometimes I make my kids clean up the whole house and if it is not done the way I said then they goto bed at 1:00 in the morning or until they get it done.