19 Reasons My Teenagers Owe Me

I live in a house full of teenagers. (Your positive thoughts and prayers are much appreciated.) Teenagers communicate with their parents largely through eye rolls, shrugs, and muttered exclamations of "Oh. My. God." when they think they're out of ear shot. It seems like they live in a constant state of exasperation with their parents.

I realize that living with a middle-aged, minivan-driving, terribly uncool mom probably creates nearly unbearable anguish. I realize that it is absolute torture for them to watch my fumbling attempts at texting or downloading photos from the iPad. I understand the inner turmoil they must feel when I don't quite get their lingo, and that they "literally can't even" when my wardrobe isn't "on fleek". 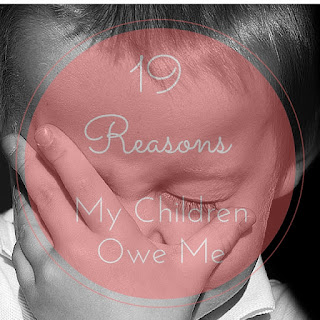 They are impatient with me in measures that can only be attained by angsty teens. But while they struggle through the weight of this burden that is their uncool, electronically disabled mother with only the hope of someday escaping out into a world filled with their fellow ultra-hip millenials, I must remind them to be patient with me.

It's only fair. Because I grew up in an age when the coolest computer games had us dying from dysentery, and because I wrote all of my college term papers without any help from Google, they owe me a slightly higher level of respect and tolerance than sarcastic sighs of annoyance. But there are more reasons, too.

Here is a list of 19 reasons they owe me. One for each year I've been a mother.

1. I carried each of them inside my own body for nine long months. Then I pushed out each of their 7 plus pound bodies. It seemed like it took forever. It hurt. It sucked. But I never once gave up on them. I never once rolled my eyes at how long it was taking them to just get out.

2. When they wouldn't fall asleep alone, I rocked them and bounced them and layed down beside them, even though I desperately wanted just five minutes to myself, to shower and wash my matted hair... or actually brush my teeth... or even just clip my fingernails that had grown so long I was starting to resemble Wolverine.... you know? Really selfish stuff.

3. Late night marathon nursing sessions when all I wanted was autonomy and a good night's sleep.

4. Every time I gave them the food they asked for only to have them scream at me and throw it on the floor. Yet, I never once gave up on feeding them.

5. I held their hands as they learned to walk. Even though walking seems like a pretty basic skill and I could already do it with my eyes closed.

7. I read aloud Goodnight Moon no less than 27,000 times. Each time with as much enthusiasm as I could muster. Even when I thought to myself, "I just can't even right now."

8. I taught them to talk, answering every toddler "Waz dat?" question with calm patience. Sometimes I regret it, but most of the time verbal communication is incredibly handy.

9. Speaking of verbal communication, I patiently translated their unintelligible toddler babble until they learned to pronounce difficult words like "potty" and "cookie".

11. I always shared my drink, even when I knew they were going to leave cookie crumb backwash.

12. Even during the most hellacious public temper tantrums the world has ever witnessed, I managed to not kill them (although I do understand why some animals eat their young).

13. I endured their Caillou marathons and Teletubbies binge watching. I'm fairly certain the Seventh Level of Hell has Caillou on constant streaming.

14. I endured mismatched clothing, filthy favorite t-shirts, and snow boots in the middle of July because they wanted to dress themselves. I assure you their taste in fashion hasn't always been "on fleek".

15. The hundreds of times I've stepped on Legos with bare feet in the middle of the night.

16. I have cheered at hundreds of sporting events... soccer games and little league and karate tournaments. I screamed my support even when they were incapable of remembering which goal belonged to their own team. (Seriously, peewee soccer has got to be the most frustrating spectator sport in the entire universe.) Their incompetence never once caused my maternal enthusiasm to waver.

17. Math homework. And all of the tears that come with it.

18. The fact that I still have to remind them to take out the trash, put away their laundry, and shut the bathroom door when it's occupied, even though I'm certain they know how to do all of those things.

19. I can still find what they are looking for faster than them (at least anything that is non-internet related like clean socks, missing text books, and karate uniforms).

I've definitely earned a little patience from my teenagers. I hope they read the list. Maybe I'll email it to them... if I can remember how.
Posted by ajoneswebb at 2:53 PM