Should We All Be Frightened in the Wake of Justice Scalia's Death? 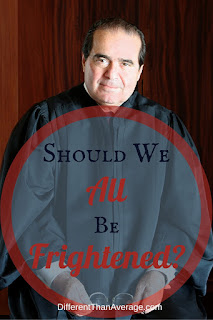 This isn't a political blog.

I first found out about Supreme Court justice, Antonin Scalia's death while I was at work on Saturday night. I was busy and didn't immediately have the opportunity to process what this meant. My first thought was just "wow". Then I asked how he had died. This seemed like important information at the time. No one knew then. We just knew it was sudden. That he had been on a hunting trip. How awful. How sad.

After work, when I had a few minutes to think, I realized what Justice Scalia's death meant politically. Suddenly it seemed even more tragic. Not because I particularly agreed with his politics. Not because I am a republican (I'm not. And don't assume I am a democrat either). Not because I was suddenly concerned with the moral slant of the US Supreme Court. It suddenly seemed tragic because I realized his death was going to draw lines. Big thick nasty divisive lines.

But I didn't anticipate the shitstorm of hate that has rained down in the wake of Scalia's passing. I suppose there is still a bit of naivete left in this cynical old mind. I somehow expected something of a display of dignity and mourning when our country loses a leader. Whether that leader shared your individual views or opposed them, I still expected a modicum of decency.

Before the country's flags were being lowered to half staff, the vitriol began to spew. Before his corpse reached room temperature, the progressive left revealed the true nature of their humanity in all of its dark and sinister glory. Not only were his politics criticized, but his character was smeared. Scalia was called a bigot and a monster. He was compared to Hitler. There was rejoicing that he was finally "burning in Hell." And as if one death wasn't enough, one sick individual actually hoped for the demise of another.


Some of you might find this surprising, but Antonin Scalia was a human being. He was someone's husband. Someone's son. Someone's friend. He was a father to nine children and a grandfather to thirty. He was a person, with hopes, dreams, and actual feelings. And there are actual people, alive breathing grieving people, actively mourning his sudden death. Imagine, just for a moment, the horror they must feel over seeing their loved one's name so quickly slandered.

But aside from all of that, just one moment of reflection might make you realize the death of one person, no matter their political views, is an ebb in life that affects us all.

"Any man's death diminishes me, because I am involved in mankind." - John Donne

That so many vocal citizens of our "enlightened" society would so publicly and unapologetically parade their hatred and contempt for a spirit in passing should leave us all unsettled.  That there are so many consumed with such hatred and darkness that they would compromise their own dignity to openly deliver a verbal slaughtering of the recently dead should make us wonder what has happened to our humanity. Where is our respect for our fellow man? Where is our compassion for the grieving? What has happened to our empathy? Our decency? What kind of world are we leaving for our children?

We should be ashamed of ourselves, that an internet mob can feel so self-righteous and justified in its hatred, as to publicly burn the memory of an accomplished, intelligent, and bold public servant who voted his conscience (whether or not his conscience spoke the same language as your's). Even if you didn't participate with your own virtual torches and pitchforks, that such an alarming and disgraceful display of hate and venom went largely unchecked is despicable. The death of a great man (whether or not you agree with his greatness)... no... the death of any man deserves at least a moment of silence.

I am not saying that to speak ill of the dead is never justified, but to rejoice in death is beyond excuse. We must not draw the lines of politics so deeply that we dehumanize those on the other side of the political trenches. Otherwise, all we've accomplished is to dehumanize ourselves. In doing so, we lose our own humanity. That we can so easily and so dramatically dehumanize our fellow citizens should leave us all frightened. Dehumanization is the first step to violence. This is not a path we want to wander down.

Ruth Bader Ginsburg has a lot to teach us in her unwavering friendship with Scalia, a friendship that lasted in spite of the drastic differences in their interpretations of law.

Politics does not define our humanity.

So true. I see this too when someone is accused of a crime. It doesn't even have to get to a guilty plea/verdict. The hate flies. It gets overwhelming at times too. We as humans are so quick to find flaws of one who has died and can no longer defend himself. We are quick to judge and to vocalize that judgement publicly. Hatred is alive and well in the U.S. of A.