Why We Cling to Our Guns 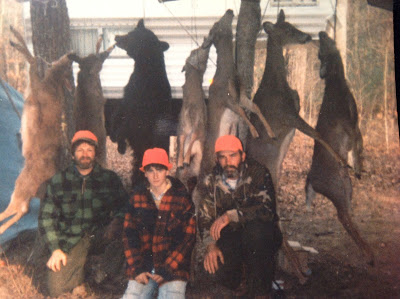 I grew up in Virginia, running barefoot through salt marshes and pine straw, the Virginia dirt caked so thick on my rough heels that it surely soaked through to circulate in my blood.

Though I’ve lived in North Carolina for more than 25 years, I still consider the Old Dominion home. My mama and most of my family lives there. Generations of Joneses and Handles and Perrys have shed their blood, sweat, and tears on that soil, proud to call themselves Virginians. That kind of family history weaves its way into your DNA, becomes part of the fabric of your identity.

So, I still consider myself a proud Virginian.

Democrats now think they have carte blanche to hack away at the Constitution. Since the November election, 142 bills have been set to hit the Virginia State House and Senate during the upcoming January session. Many of those bills contain some of the most restrictive gun laws to ever be bandied about in any State legislature (at least in the United States).

In response, average Virginia citizens are understandably outraged. The proposed laws would make tens of thousands of legal gun owners felons overnight. And when Governor Northam was recently asked about confiscating firearms from law-abiding citizens, he responded, “that’s something I’m working [on] with our secretary of public safety.”

But Virginia citizens are yelling a resounding “Hell, no!”

Currently, 39 Virginia counties, 2 independent cities, and 2 towns have adopted Second Amendment sanctuary resolutions. This means these communities will not expend resources or endanger their law enforcement officers to enforce gun control measures that violate the Second Amendment of the United States Constitution.

And if you think this is just a small flash in the pan, here is a picture from just outside one of the meetings in a small, mostly rural, Virginia county. 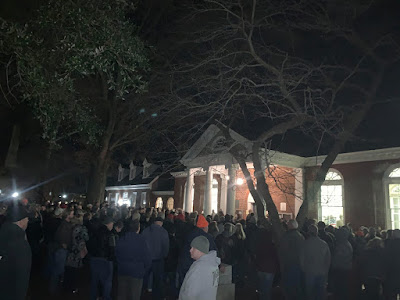 These people won't sit quietly by while their governor tries to confiscate weapons they've owned legally for years, some of which were passed down to them as children.

I’ve been posting information about the 2A Sanctuary resolutions on some of my social media platforms. In response, someone asked me, “Why do you people insist on clinging to your guns?”

First, by using the term “you people” I can already tell you aren’t willing to listen. That’s a form of othering. It is textbook tribalism and dehumanization. We aren’t any different from you. We pay our bills, sweep our floors, and send our kids to school.

Regardless of how similar we are, I don’t expect you to fully understand. You haven’t had the same experiences I’ve had. You didn’t grow up in the same culture. I could talk until I’m blue in the face (or my hands curl up with chronic carpal tunnel from typing) about rights and tradition, personal protection and insurance against a tyrannical government, but you aren’t going to hear me.

I can shout “Shall not be infringed!” until the proverbial cows come home, and it won’t make one bit of difference to someone like you.

But it sucks to be misunderstood, to be categorized as somehow violent because I “cling” to my guns.

Even though I do.

But I have plenty of reasons to cling.

Here is just one small story to maybe help anyone who is still listening to understand. There are many like it, but this one is mine.

My Daddy purchased a semi-automatic Remington .30-06 from J.C. Penney the same year I was born. Knowing how tough my family had it financially, this was a big purchase, and one that wasn’t taken lightly

That rifle was Daddy’s pride and joy. He carried it with him to hunt whitetails in the Virginia mountains for over 40 years, and he killed more deer with it than he could count.

He let me hold that rifle for the first time while he field dressed a big doe on Thanksgiving morning, a doe that would feed our family for most of the coming winter. I knew he was giving me a big responsibility, entrusting me with one of his most prized possessions. It felt like he had laid the whole world in my hands.

I also toted that rifle slung across my right shoulder (my own hung from the left) while he dragged that deer over rough terrain. It seemed like at least 10 miles to the gravel road where he had left the truck. It was hours after dark before we finally made it to the road, Daddy’s headlamp the only visible light other than the stars overhead.

But we came out too low, in a bottom, staring straight up at the road some 20 feet above us.

Daddy shined his light up that steep embankment, and sighed. Then he started hauling that deer behind him, sliding backwards through the dead fall leaves more than he managed to climb up.

“Alice! Hike up there and see if you can flag somebody down to help us!”

But I was only about 13, weighed all of 80 pounds soaking wet, and was weighed down by my gigantic hunting boots and two firearms that were getting heavier by the minute.

I tried anyway. I wedged myself behind trees where the dirt and leaves wouldn’t fall away so quickly. Then I would grab the next tree and haul myself up to that one. Daddy continued to shout at me even as he tried to haul that big doe behind him.

“Watch out for the scope, dammit!”

“I told you to be careful!”

After about an hour of straight uphill climbing and falling, we finally made it to the road. I sat on the deer while Daddy fetched the truck, both of us soaked head to toe in sweat despite the freezing temperature. No one ever stopped to help us.

I followed behind my Daddy, that rifle slung across his back, for more than 20 hunting seasons. He once handed it to me loaded when a bunch of strange men pulled up to our remote mountain campsite around midnight. Before he went out to see what they wanted, he said to me, “Whatever you do, don’t shoot me.”

That was the closest that rifle ever came to being an assault weapon, although it falls in that category under Governor Northam’s proposed legislation. Those men knew I had that weapon, and maybe for that reason alone, I never had to use it.

Years later, my oldest son would hike with us in the mountains, that same rifle hanging on Daddy’s shoulder.

Daddy died in 2017, the day before the last day of the hunting season. He suffered a heart attack while trying to catch some hunting dogs that were running hot on a deer trail. He died in the hospital two days later.

I had the privilege of being with him when he took his last breath. My mom and my youngest three children were there, too. But my oldest son, Daniel, didn’t make it in time. The Army dragged its feet a little too long on approving his emergency leave, and I had to break the news to him over the phone.

When the Army finally let him go, Daniel rushed through icy snow from Fort Bragg to Hampton, Virginia, so he could be with the rest of the family. After hugging each of us, he quietly went to the spare bedroom, slid the gun case out from under the bed, and put that .30-06 to his shoulder. He placed his cheek tenderly against the stock, and my tough Army soldier cried big fat tears all over that cedar-stained wood.

It was the closest he could get to hugging his grandfather good-bye.

This year, I was lucky enough to watch my younger son, Silas, shoot a buck with his grandfather’s rifle. It was an amazing 125 yard shot. Free-standing. No rest. His cheek pressed against the same cedar-stained stock my Daddy’s had rested against so many times over the years. One shot dropped that buck like a sack of potatoes. It was a thing of beauty.

If you come from a hunting family, those firearms are more than firearms. Each represents a thousand tiny memories. You're damn right we cling to our guns.

Hunting is also tradition and it’s family, and as anyone who hunts knows, it’s also spiritual. You can’t spend hours in the woods without feeling the divine. And our guns symbolize all those things and more.

I know I don’t live in Virginia.

Besides, we lost all Daddy’s guns in a tragic boating accident some time ago. I hear there’s a bunch of that going around.

But even if I did live in Virginia and that rifle was still mine…I would never in a million years hand it over to Governor Northam.

His hands aren’t fit to touch it.

And I know that the news media and politicians in Virginia claim these county meetings are nothing more than a symbolic gesture. They insist that citizens are only posturing and aren’t at all serious.

But I know better. You don’t just hand over precious family memories to the government so they can crush them down, melt them, and turn them into scrap metal.

I promise you, this is the hill “you people” are willing to die on. But as long as they have their firearms, maybe they won’t have to.

Posted by ajoneswebb at 3:11 PM

Amen! from Carl in Oregon.