It all started with a Facebook post. I was just innocently scrolling through my newsfeed when I saw it: a "friend's" post about her score on an online IQ test. You might question the IQ of someone who believes online IQ tests are a valid measure of intelligence, especially when that person posts their results for all of their cyber friends to see. You might also feel sorry for someone who needs to validate themselves so publicly in such a shallow and meaningless way.

Then, over the long Thanksgiving weekend, it got worse. My oldest son announced to family and friends that he is enlisting in the U.S. Army. (He's already qualified. He's taken the ASVAB and his physical, and passed his psychological evaluation. He's good to go, just needs to sign a contract.) Upon hearing his news, more than one person asked him what he scored on the ASVAB (Armed Services Vocational Aptitude Battery)... then felt the need to tell him about their much higher score. (Nice people skills!)

Perhaps it's because we've been programmed through our entire school careers to believe that scoring well on a test is the ultimate goal. There is such an emphasis on successful standardized testing that our children suffer from anxiety. Often teacher pay and school funding is affected by student test performance. There's a lot at stake. Students are run through mock practice tests and weeks upon weeks of test review. Lessons about test taking strategies trump more effective and interesting forms of instruction because ALL THAT MATTERS IS THE TEST. Just score well on the test and everything will be fine. 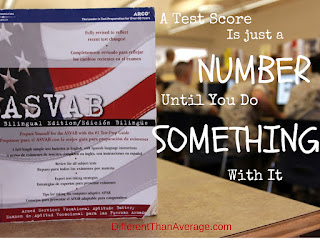 How well a person scores on a standardized test (or even stupid internet IQ tests) do not determine success. High IQ scores or ASVAB scores or even SAT scores are not good indicators of where a person is headed in life. A great test score is just a great test score until that person does something with it.

There are a lot of seriously smart people out there, some of them could probably ace the ASVAB (Let's not even get into cheesy internet IQ tests here) with their eyes closed. But if those super-smart people are lounging around couch potato-style what value are they really contributing to society? (I'm talking to you here, internet IQ bragger wallowing in debt, stuck in a dead end job, and working on your third failed marriage!)

I told my son not to worry about those people who needed to brag about their test scores. What are they doing with those test scores (other than attempting to make him feel inferior)? Did they join the military?

By just joining the United States military, my son has made himself part of an elite group. A very small percentage of people join. The numbers vary, but the consensus seems to be around 2 percent of the population.

He's already set himself apart from the average, test-taking American by enlisting. Sure his score might not be as high as Billy Bragger's, but he qualified, and he's doing something with it. It's the other qualities that the test doesn't measure that will make him a successful soldier and a successful person.

Taking the test and doing something with the knowledge it supposedly measures are two very different things.

Billy's score is just a number, albeit a very high number, on a piece of paper.

My son's is a ticket to his goals.
Posted by ajoneswebb at 10:33 AM

I could relate with the article straight from the title itself. I too believe that tests cannot determine my true potential. So when I failed to clear my bar exams in the first attempt, I did not get discouraged. I’ve chosen to try again for a second time, and have worked harder than before. Have also been taking classes at one of the popular Bar Review Courses.