The Joy is in the Journey 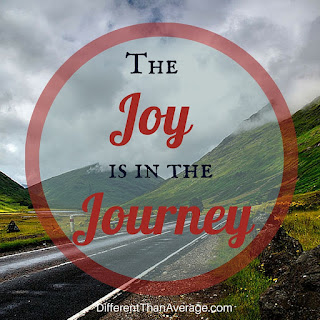 My daughter bought a car.

It's the real deal. She's only seventeen, by the way. It's okay for you to be impressed, because I certainly am.

She got her driver's license this week, too. She actually took the driving test in her very own vehicle, so that's kinda cool. I went with her to the DMV because I love her and she was nervous and I enjoy smelling other people sweat on a Thursday afternoon.

When she arrived back from the driving test, she kind of made eye contact and sort of shrugged in my direction as she followed the administrator back to her desk. I could just make out the sound of her voice over the piped-in elevator music as she signed things and posed for her picture. I knew she had passed. I knew I was now the mother of another licensed driver.

She was ecstatic. I, however, felt a bit somber, but managed to muster some enthusiasm for her as she showed off the awkward license photo (Does anyone ever take a good photo for their license?) Then my husband and I sent her off in her new-to-her vehicle for her first solo run.

As we walked toward home from the DMV (one of the perks of small town living), I watched her stop at the first intersection stop sign. She glanced at us and waved before checking both directions for oncoming traffic. As she turned to check toward the right, I knew she was realizing that there was no one in the passenger seat. She was on her own, experiencing her first real taste of freedom, realizing that she is the master of her own destiny.

Watching her pull away from that intersection and drive away without me, something heavy hit me and hit me hard. It wasn't an incompetent student driver, either. It was a sudden realization.

All of my children are going to leave me.

I suppose I already knew this. They've been slowly leaving me since that first moment they were each laid in my arms. I knew, at least on some level, that they would all one day grow into adults (hopefully responsible and productive ones) and create their own lives, pursue their own dreams. I remember marveling at each of their newborn faces and wondering what kind of people they would be when they were grown.

So I knew they would grow up, but it always seemed so very distant, like a beacon pulsing far off in the distance, just barely visible beyond the strewn legos and scattered bath toys. I suppose I've been too busy wading through the everyday stuff, cooking dinner, folding laundry, paying bills, keeping them from killing each other, to look up and see just how rapidly that horizon was approaching.

It's been a rough summer. Child #1 left home in March. He's been in the care of the U.S. Army for the past three and half months, and we've had scant contact with him, only receiving a phone call about every third week. His absence has been felt in surprisingly tangible ways, always looming like it's own presence. His absence felt in his empty chair at the dinner table, the perpetually closed door to his bedroom, his missing opinion in every conversation.

And through these three months, with Child #1's departure to adulthood still so fresh, his sister has been working diligently on her own exit strategy, touring three college campuses, while Child #3 prepares to enter high school, already chatting it up about his future career plans.

I feel like I am coming undone. I have always been an incredibly goal-oriented individual. Put a target in front of me and I'm going toward it with laser-like focus. So, I'm surprised at my reactions to all of this growing up stuff. The goal has always been to raise adults, to get my children safely to adulthood, having them arrive ready to move forward with purpose and drive, capable of taking care of themselves and be productive members of society.

And here we are. I should be feeling all of those big giant feelings of accomplishment and achievement and triumph that come packaged together with a destination reached, a goal realized. It has been a long road. It's taken an awful lot of effort to get here. I should be thrilled.

I suppose I am thrilled and excited and proud. For them, at least.

It's true what they say about life and journeys and happiness. The joy really is in the journey, not the destination.

And it has been one tough journey, full of temper tantrums and tears, doubt and second guesses, mistakes and messes, heartache and hurt feelings, and "Are we there yet?" whining. So many times I wished for an end of some sort, or at least a brief reprieve, to the bickering and the stress and the energy-suck that was raising children. So many times I thought the journey was the hard part.

But let me tell you...this destination... well, it kinda sucks.
Posted by ajoneswebb at 12:19 PM