On "Coming Out", Ellen Page, and Michael Sam 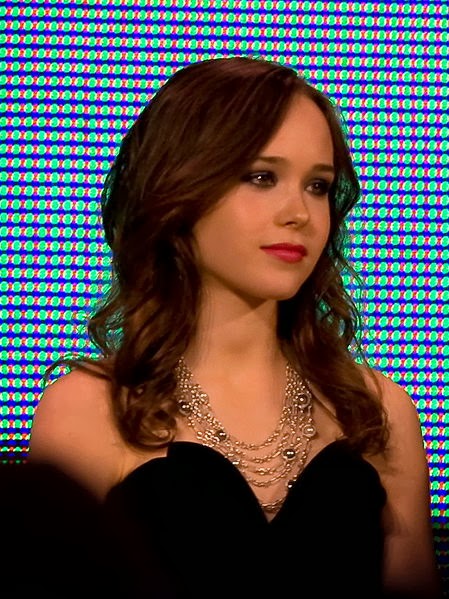 According to several links posted on my Facebook news feed, some actress named Ellen Page has come publicly bursting out of the closet.  This past Friday, the young (and obviously obscure) actress announced that she is gay at a Human Rights Campaign Event in Las Vegas.

I had never heard of Ellen Page before her name was plastered all over the internet due to her "moving" speech.  But then again, I'm not a serious movie-goer, but I've heard that she starred in some movie named "Juno" and made an appearance in some other one called "Inception".  But I certainly don't think she qualifies as an A list actress.

I don't care.  In fact, I'd venture to say that the vast majority of Americans just do not care about Ms. Page's preferred bedroom activities. While being gay in America may have (in the not so distant past) riled up a bunch of people.  It just isn't happening any more.  Openly gay people are everywhere, not just in San Francisco.

So why are so many progressives fawning over Ellen Page and how brave she is to come out in Hollywood?  Good question.  I mean...it's Hollywood.  Was there really some irrational fear that she wouldn't be accepted in Hollywood?  Seriously?  Isn't Hollywood like almost entirely progressive and pro-gay marriage and liberal and accepting?  What about Ellen DeGeneres and Neil Patrick Harris and Elton John?  They are all openly gay...and pretty famous and wealthy and influential to boot.  In fact, it's almost kind of vogue to be openly gay in Hollywood (even if it isn't the trendy thing to do in small rural towns across the U.S.).

I agree that being gay in most of America (outside of Hollywood) can still be pretty difficult, especially here in the Bible Belt.  But I have to wonder why coming out of the closet is still considered such a big event.  Why do we need public announcements and excessive media coverage? Is it not okay to be confident and believe firmly in who we are as individuals without having to have the acknowledgment and acceptance of society at large?  I'm just asking, "Who cares what the rest of the world thinks?"  Who cares if the rest of the world accepts who you are as an individual?  Because the acceptance (or lack thereof) of society shouldn't influence who you believe you are.  Not one iota.

I wish we lived in a world where we, as individuals, could just quietly be.  Be whatever we are, without the need for announcements...or labels.  Because labels are for canned goods, not people.  They are limiting and confining.  But unfortunately, we live in a society of labels.  Everyone slaps labels on you...your parents, teachers, employers, friends...why would we want to label ourselves?  Especially in an area as complex and diverse and complicated as sexuality and relationships?

Perhaps it's from a deep need to fit-in, to belong that we assign these labels, a desire for kinship and acceptance that our society is often missing.  In a society where independence is worshiped, we long for a sense of interdependence and community.

Or, in the case of Ellen Page, it could be for publicity's sake.  When the act of coming out in Hollywood goes viral on the internet, I have to wonder why.  It has launched a relatively little known actress right to the front of social media hype.  With this one act she has beaten obscurity, and shielded herself largely from criticism and mockery (lest the offender be labeled homophobic).  She has become largely untouchable by the vulture-like Hollywood critics of fashion and lifestyle and beauty.  And if and when she is turned down for parts in the future, it won't be her acting ability that comes into question, but rather the acceptance and progressiveness and open-mindedness of the casting crew.

Brilliant in the same vein as Michael Sam, who "came out" (dare I say strategically) before the NFL draft.  Because as a moderately talented openly gay football player, if you aren't drafted by at least the fifth round, well...you'll get just as much publicity as if you had, plus a book deal and a made-for-tv movie about your hardships...and you can always rake in the big bucks as a motivational speaker.  Hello talk show circuit!  And it will be a lot less work than training for third string in the NFL.

There really is no such thing as bad publicity.  As long as people know your name, it doesn't matter in the world of the rich and famous just what you are known for.  So if your career is suffering, maybe you could just come out and bravely announce your gayness.

And it probably wouldn't work for sarcastic and opinionated bloggers either...although I wouldn't want to slap a restrictive and limiting label on myself anyway.  I'm not a can of soup.