"What happens when you put a boy in front of a girl and ask him to slap her?"

Italian website, Fanpage.it attempts to answer this question in their "stirring" PSA-gone-viral against domestic violence.

You can watch the video below, but if you're lazy (like me) here's the Cliff's Notes version:

Young boys are interviewed on the street. (They speak Italian, but lucky for us there are subtitles.)  The boys, ranging in age from 7 to 11, obediently give their names and ages and tell the interviewer what they want to be when they grow up. 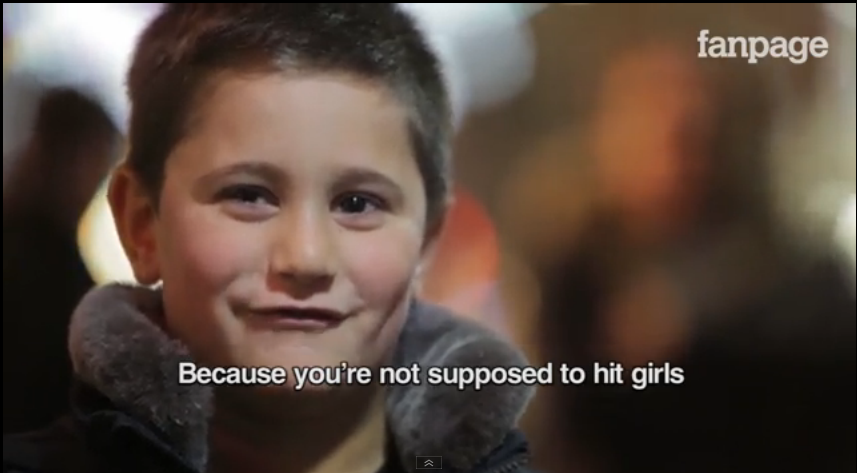 Then a pretty young girl named Martina steps into the scene. The boys are all obviously smitten. They are asked to tell what they like about her (Her hair, her eyes, her hands in her pockets). They are told to make funny faces at her. They are told to "caress her", leading to some light stroking of cheeks and arm. Then the interviewer tells the boys to "Slap her. Hard." And they all refuse, because she is a girl. Proving that children are so much smarter than adults.

It's all so sweet and touching, isn't it? It's apparently got a lot of people just welling up with emotion and shedding tears and a whole bunch of other hoopla.

Except that it's stupid.

1. Even a man with a long violent history of domestic abuse isn't going to stand in front of a camera and slap around a pretty stranger on command. No. Domestic abuse usually happens behind closed doors, where no one can see, generally during moments of intense emotion. It doesn't just happen between random strangers on the street. That's why it's called "domestic" violence...because it involves home and family. (Duh.)

2. One boy comments that he couldn't hit the girl "because she's pretty." This seems to insinuate that punching ugly people is perfectly acceptable. (Maybe we could make that a sport or something.) It also seems to place a rather high value on physical appearance. Do people lose value as they age or gain weight or bear children? (Oh wait... society does seem to think that they do. Carry on then.)

3. Caressing strangers is creepy. Plus it goes against everything being preached rather loudly from consent soap boxes. Did anyone ask the girl if she was okay with it? (She just stands there silently smiling while a man gives consent on her behalf. Super creepy.) Remember "Yes Means Yes"? Unless maybe somebody with a camera tells you to do it. Then it's okay. In a world where college students almost have to have notarized contracts giving express permission to show physical affection, this whole stranger street caressing thing seems incredibly cavalier.

4. Domestic violence isn't only about men hitting women. Why won't the boys slap her? "Because she's a girl." "Because I am a man." How about because you don't just randomly whack people you just met for no good reason? How about because she's a human being and I'm a human being and violence isn't the answer? Plus there's a big double standard here. Maybe the producers could have taken a couple of girls and told them to haul off and hit some attractive dude they just met. I'm betting the girls would be more likely to come out swinging... and no one would probably even care.

5. It's sexist. Not just the double standard, either. The girl is used as a prop, a thing, an object, an accessory. She has no lines. She doesn't speak to give consent or state an opinion. She doesn't deny the boys or defend herself in anyway. She is a victim to their whims and to the whims of the (male) interviewer. She is left voiceless while the males in the video are given supreme power over her, to either hurt her body or love it.

6. It's incredibly cliché.  Does anyone really believe that little boys in Italy want to grow up to be pizza makers?

I will readily admit that I am scrutinizing this advertisement through my own cultural lens. There are undoubtedly huge differences between the Italian context and meaning and my own middle-class American paradigm. However... it doesn't excuse the exuberant praise and unconditional accolades my American friends are laying on in think gloppy coats.

Don't be fooled, fellow Americans. Don't be fooled by the cute boyish smirks or the emotion-stirring background music or a vague promise of decent authentic Italian pizza. This video isn't changing anything. In fact, it's probably cementing some pretty crappy cultural beliefs that are long overdue for ousting.

Posted by ajoneswebb at 1:32 PM