The Double Standard of Violence Against Women

If you've discovered a way to avoid celebrity gossip, like maybe living under a rock and never engaging in human conversation, you might have missed the scandal of Ray Rice and his NFL suspension (Lucky you). Rice, a professional football running back, is currently serving an indefinite suspension from the league thanks to a TMZ video release of the 212 pound athlete punching his then fiancee, Janay Palmer, in the face.  The video shows the couple arguing, spitting, shoving, and then Rice delivering a blow to the face that knocks Palmer unconscious.  Then there's some embarrassing dragging of the unconscious body and attempts to extricate her limp form from the elevator in which the sparring match occurred.

Thanks to the grainy yet shocking video, football fans and sports media are in a tizzy, and social media is all abuzz over the societal ills of domestic violence. People (especially women) are ranting over the injustice of violence against women on blogs and Facebook and Twitter and every other corner of the media world. Even Vice President Joe Biden inserted his two cents during an interview with the Today Show, saying "It's never, never, never the woman's fault. No man has a right to raise a hand to a woman."

If you are successfully living under that rock, you were probably also lucky enough to have missed the stories about celebrity Kelly Brook and her routine trivialization of domestic violence.  But don't worry; it's not the kind against women.  Brook recently released excerpts from her autobiography in which she reveals her penchant for punching her boyfriends in the face. 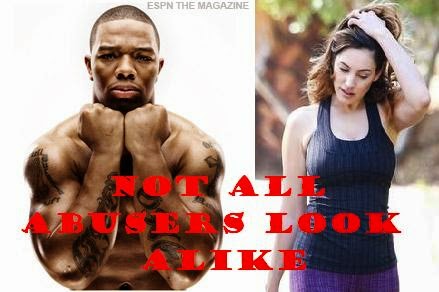 While the world is all up in arms about Ray Rice and his brutality and violent nature, hardly a peep has been made about lovely sweet Kelly and her fiery little temper.

In a world where women supposedly want fair and equal treatment, where cries of the injustice of gender inequality ring across the internet and gender-based discrimination is deemed a violation of basic human rights, this situation is drenched in irony.

Apparently domestic violence is only a heinous and vicious issue when the victims are female.

Perhaps all of the social media spotlight attention has been on Ray Rice and his knock out punch because it fits the hot topic issues of violent crimes against women, falling right in line with "rape culture" rhetoric which keeps women perpetually pissed off at men.

I'm a woman, so I should be all kinds of disgusted at Ray Rice and his physical abuse of the women he (supposedly) loves.  And because I am a woman, I should also be at least mildly amused by Brook and her propensity to express her feelings of jealousy and frustration with her partners in the form of swinging fists.

But I am also the mother of sons - two beautiful people who don't deserve the script society hands them.  Our cultural playbook, largely perpetuated by social media rants, opportunistic politicians, and half-blind feminists, keeps us believing that men are problems while women have problems. (Which I could point out keeps women safely tucked in the role of victim... but I might be accused of "victim blaming", so I won't go there.)

For all of the tantrums women throw about the unfairness of a world where women must learn to defend themselves and walk in groups and wear rape-prevention nail polish, they miss the unfairness of the male world - a world where men CAN'T defend themselves, where a woman's accusations are taken as gospel, and it only takes one little lie to ruin a career and a reputation.

Domestic violence has long been viewed as a crime perpetrated by strong and domineering men against small defenseless women.  With that view it's no surprise that feminist organizations have added domestic violence to their long list of society's alleged injustices towards women.  While statistics are hard to gather, research suggests that men are at least as likely to be victims of domestic abuse as women.  Yet last year only seven percent of those convicted for domestic violence were women.

The cards are largely stacked against men, who likely already feel emasculated by a violent female partner.  Plus if he raises a hand in defense against her blows, he automatically becomes the aggressor in most people's eyes (Remember Mr. Biden's comment about no man raising a hand... it's not just Mr. Biden who thinks that way).

Take for example a personal friend who called the police when he was attacked by his drunk girlfriend, who beat him and bit him and attempted to gouge out his eyes.  He never raised a hand against her, yet when he finally called the police... he was the one arrested and charged. Her accusations against him were enough to put his career in jeopardy. He was treated like a criminal by people who knew him until he was able to expose her lies in court thanks to a video of the incident he had the presence of mind to record.

My husband was in an abusive relationship back in college before we met.  His girlfriend, a woman with a fiery red-headed disposition, would hit him and throw heavy objects like lamps and books at him.  He also never raised a hand to defend himself... except once to forcibly remove her from his dorm room in the midst of one of her angry and violent tirades.  Then he was portrayed as the aggressor for laying hands on her.

That's the problem with woman-on-man abuse, there's no defending yourself under the circumstances without being accused of abuse.  No one thinks a man can be the victim... because women have already been cast in that role.

So, Mr. Biden, sometimes it is the woman's fault.

And sometimes women are lying and vindictive.  Cries of abuse or rape from a woman are like a death kiss for men.  It only takes a simple accusation to ruin them.  The burden of proof is never on the woman.  Remember what happened with the Duke Lacrosse scandal, where one false accusation shut down the entire lacrosse program, cost the coach his job, and had three young men's professors and fellow students (Hell! Most of the world!) presuming their guilt.

Women moan and complain on Twitter and Facebook about the unfairness of women's lives - about how they don't want to live in a world where they have to watch their drinks and learn to defend themselves and never, never walk alone at night.

Guess what ladies.  We don't have a monopoly on being wronged.  While women are fussing about "victim blaming" and teaching our sons not to rape, we are forgetting that we also need to teach our daughters to not be spiteful bitches.

Because I don't want to live in a world where my sons can't block a punch because it might bruise their female attackers.

Because I don't want to live in a world where my husband, a high school English teacher, has to constantly concern himself with what false accusations an upset female student might make after getting a bad grade.  He already has to go to great lengths to ensure he is rarely alone in a room with a female student and that the door is always open and there is always a table between them when he is alone with one.  I don't want to live in a world where the mere accusation of impropriety is enough to ruin his reputation, relieve him of his job, and possibly land him behind bars.

Because I don't want to live in a world where I feel the need to advise my teenage sons to avoid situations in which they might be alone with a spurned ex-girlfriend or a woman whose affections they've rejected, because women can be vindictive and crazy and one false accusation could take my sons away from me for a very long time.

Because I don't want to live in a world where my sons have to be careful who they sleep with and worry about all of the varying definitions of mutual consent.  They know that "no means no," but do they understand that some people think "yes means no" if a partner has had a couple of drinks?

Hi there, anonymous friend. Permit me the opportunity to clarify the meaning of the post, given that I know the blogger personally and am aware fully of the origin of the name of this blog.

See, some years ago we had a mutual friend. I say, "had," because our dear friend has left this world and now dances with the stars. That friend had a saying: "If you want to be better than average, you have to be different than average."

The blog is an homage to that dear friend, and the title reflects that tribute.

In light of this information, I hope you feel like the complete douche you truly are. Have a crappy day.

Hey, friend. Try looking up "parallel structure" on your handy-dandy Website of Grammar. Maybe that will help you with your understanding of the blog's name.