This weekend is Independence Day.  There's nothing like a three-day weekend, backyard barbecues, and grand displays of pyrotechnics to bring out everyone's inner patriot.  Because the warm pulse of national pride is running rampant through our collective veins this week, social media is afire with public proclamations of loyalty to good ole 'Murica.  Star-spangled memes have glittered up my Facebook news feed proclaiming the virtues of everything USA from Mom's apple pie to our military supremacy, and anyone who does not agree should either be forced to agree or just "get the Hell out if you don't like it."  (Could anything be more UN-American?)

Enter this wonderful picture, shared on Facebook for all the world to see (or at least everyone on the poster's friends list) full of patriotic imagery to thrum your American heartstrings; school children, the Stars and Stripes, a crippled Marine... 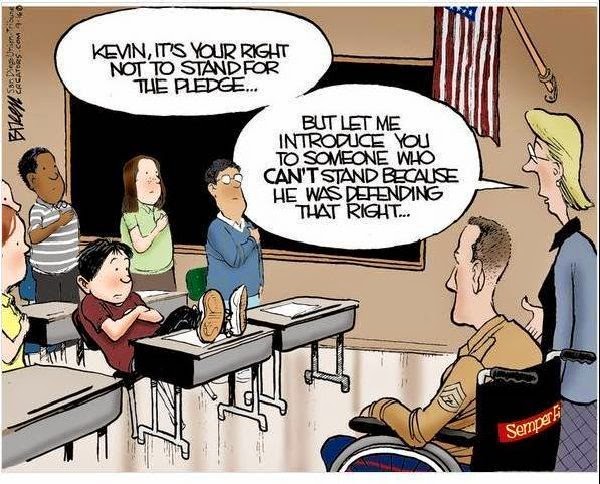 I suppose if we can't indoctrinate young impressionable schoolchildren through mindless rote recitations, we'll resort to shaming and guilt.  That always works.

But really what bothered me more than this comic strip teacher's questionable pedagogical methods was the string of hateful comments left behind by several arrogant nationalist flag-wavers.  Disgust and loathing were flung about in the discussion of those who choose to abstain from publicly reciting the Pledge of Allegiance.  Non-participation was called an "insult to veterans" and a product of "liberal brain-washing" and "against everything this country was founded on". One person even suggested that every student in the public school system should be forced to participate in daily recitations whether their parents like it or not. A casual observer might conclude that there is no more heinously un-American act than questioning compulsory pledge chanting.

Oh, the irony!  If it ran any deeper I might need a snorkel and some swim fins.

First of all, the concept of "forcing" any (supposedly) free American citizen (no matter how young and malleable) to swear an oath of fealty to a symbol of a government, especially one  purportedly founded on liberty and justice, should be glaringly contrary to "everything this country was founded on".  But the promise of a holiday full of parades and fireworks might cause some people's patriotism to run amok.

It might surprise some of those radical patriot commenters that the Pledge of Allegiance actually has its historical roots in socialism.  (This should particularly upset the uber-conservative and Tea Party sympathizers hiding under their red, white, and blue mantles of patriotic righteousness.) Its author, Francis Bellamy, was a self-proclaimed "Christian socialist".  The Pledge was penned as part of a National Public School Celebration of Columbus Day promoting loyalty to both the government and its mandatory schools in 1892.  It was first published in the magazine The Youth's Companion and later recited by all of the children in attendance at the Columbus Day Celebration later that same year. Bellamy (who served as chairman of the event) spoke at the celebration saying, "the training of citizens in the common knowledge and the common duties of citizenship belongs irrevocably to the State".  (Funny.  I don't remember reading that anywhere in the Constitution of the United States. Must have missed it.)

From those humble beginnings, the Pledge of Allegiance became recommended or mandatory (although the Supreme Court ruled in West Virginia State Board of Education v. Barnette that the Pledge could not be required of any individual) in a majority of states and has become a daily fixture in most American classrooms where school children line up like Pavlov's dogs for its ritualistic delivery.

It was a brilliant way to promote devotion to the State in the minds of impressionable young children.  For even though the meanings and implications of the words memorized and chanted each morning with hand over heart might seem to be lost on innocent, unsuspecting children, little by little it has crept into America's collective consciousness.  The love and respect of country because it is ours and it is home and we are free has over time subtly shifted to a vassal-like sentiment of obligation and belonging (like obedient children) to His Lordship, the Government.

What a shame some of those opinionated posters to social media not once stopped to think about what the Pledge of Allegiance says about liberty and justice.  What a shame that they never questioned why a Pledge of Allegiance is necessary.  Because had they, there would not have been the vicious accusations of irresponsible citizenship. Their internet rants simply prove the effectiveness of government indoctrination.  Because they never questioned or had a thought independent of the public school "education," they will defend to the death (or at least to internet public humiliation) how American and wholesome and moral a speech to a fabric flag is - all while belittling and vilifying anyone who thinks otherwise... They even recommend forced compliance or exile for those who question the country they have been programmed to love.

While I'm no beer-swilling, flag-waving, Yankee Doodle Dandy, I still consider myself blessed to be an American, and even if I were able to sweep aside the socialist propaganda that the Pledge of Allegiance is, I still have major issues with it.

Maybe as collective Americans we don't take our oaths very seriously.  Take our high divorce rate and sham politicians (who regularly poo all over their oaths of office) as proof.  But I personally do not take oaths lightly.  I'm a firm believer that your word is your bond and you should uphold your oaths with all the integrity you can muster.  Call me silly, but I feel no allegiance to a flag... any flag... it's just an inanimate piece of cloth.  At best it's a symbol, and symbols don't require allegiance... so why bother swearing allegiance to one?

What does allegiance even mean?  What are we swearing to do exactly?  What actions are we committing to perform?  Oaths should be a vow of specific action.  Take the presidential oath of office for example:

Seems pretty clear, although not always carried out - preserve, protect, defend - those are promised actions.  But what exactly are we swearing to do when we pledge allegiance? Dedication?  Devotion? Nope.  Those aren't actions, they're feelings.  Are we promising emotions?  And why do we have small children pledging oaths adults don't even understand?  It's an insult to oaths everywhere.

And even if we aren't vowing eternal homage to a span of yard goods, the pledge has us vowing allegiance "to the Republic for which it stands."  Lies!  That flag no longer symbolizes the republic our founding fathers envisioned.  The United States of today has policies formed more by the economic elite than elected representatives of the people.  Perhaps the wording should be changed to better reflect reality, but "to the oligarchy  for which it stands" lacks the same patriotic luster.

And since we're talking verbiage, I have a big beef with the word "indivisible".  Our nation is not indivisible.  We are divided and divided again, everyday... by gender, and education level, and race, and religion, and sexual preference, and buying power, and political parties - and that division is usually perpetuated by the very people who represent the government to which we are pledging allegiance. It's insane how divided we are.  Even besides all of that, there is this vague legal fiction the government maintains about the sovereignty held by individual U.S. states.  The word "indivisible" seems to me an obvious eye-poke to Southern secession (which was perfectly legal although perhaps not the best idea ... that's another blog post), but probably a not-so-subtle reminder to NEVER let that happen again.

And to wrap it up, we pretend there is "liberty and justice for all".  We are not truly free, because regulated freedom is not real freedom.  Our liberties are violated everyday under the masquerade of national security. Our income is taxed.  Our privacy violated.  We are slowly losing the right to defend our families and property.  We can't buy unpasteurized milk, or travel by airplane without strangers touching us, or allow our children to sell cookies and lemonade to our neighbors.  Our liberty is dying a slow and miserable death.

"Justice for all" exists only in the fantasy land of Law & Order reruns.  No. In the real world, justice is only for those who can afford expensive lawyers to fight lengthy court battles.  And often those expensive lawyers save the guilty from the justice they rightly deserve.  It seems our definition of justice greatly depends on a person's net worth.  Our prisons are full of wrongly accused innocents while rich white collar criminals walk away scot-free.

So no, I won't be proudly pledging allegiance to the American flag this Independence Day.  And while there are certainly soldiers long dead who paid with their lives for my right to opt out (and for that I am most grateful), no modern-day Marine has lost his legs defending my freedom (unlike the patriotic propaganda comic strip teacher would have you believe).  Today's soldiers are far too busy losing life and limb in the protection of America's oil interests.  World War II is far behind us.  The Cold War is over.  Our military is no longer defending America's citizens from the phantom threat of enemies who steal our freedoms while spreading socialism.  We managed to do all of that ourselves.

All of that should get you good and geared up for your patriotic picnic shindigs.  Go America!

But before you label me cynical and yell your internet insults of treason demanding that I "just get the Hell out if I don't like it", let me just say that I still love my country deeply.  It is home and it is worth defending.  I just don't like the direction we seem to be heading. (What are we doing in this handbasket!?!) But if questioning the Pledge of Allegiance and speaking out in rational criticism against the current state of our nation (even though it could potentially land me on some NSA watch list...  Hi!  I know you guys are reading.) makes me un-American... you certainly don't understand the principles this great nation was founded upon.
Posted by Alice Jones Webb at 10:31 AM

Concerning the photo, those were my thoughts exactly when it appeared in the local newspapers comic section.

I have had a few "incidents" over this issue. I will not pledge- but I generally try to avoid any place or event where that sick ritual will be performed. Here's something I wrote a year or so back: Today, I was "this guy"

I agree with your basic priciples, but a little over the top.

Thank you. Every word is a puzzle piece to the great jig saw poem of truth. I don't understand everything but my soul feels this and please be well and again thank you.