Several people have asked me recently how my kids are enjoying their summer break.  I suppose that's a standard mid-summer question to ask a parent when you are awkwardly fishing for a conversation topic. Usually about the time the question has escaped their lips, these people remember that my children are homeschooled, and they scramble to amend the question.  "Are you doing school this summer?" "Have you finished with school yet?"  "Do your kids get a break?"

My real answer to this takes several minutes to explain and delves deep into my philosophy of education ("Learning is life!  Life is learning!") and isn't really what people's curious minds want to know.  They don't understand that we aren't confined by schedules and curriculum and compulsory requirements.  I imagine that in their minds, I could be a slave-driving drill sergeant homeschool mom who insists on math drills and history lessons and a 4-page required summer reading list.  Or I might be like the standard public school teacher who celebrates the end of the school year with copious amounts of glee and booze, just glad that it's over with... celebrating the opportunity to ignore my children through the hot summer months.

But I'm neither.  Our classroom (and our "curriculum") follow us wherever we go, and we seize learning opportunities whenever they present themselves.  And because of that there is no start or stop to our school day or school year.

Over the long Independence Day weekend we took our "classroom" with us to the beach, a tiny little campground on an island in the Currituck Sound.  I wanted to forge memories with my kids while expanding their life experiences and learning opportunities.  (There's nothing like spending the weekend in a tent crammed with six people, fighting mosquitoes, and doctoring sunburn, and trying to just grab a few hours of uninterrupted sleep on the oh-so-comfortable and quite uneven ground to teach you things... like how to appreciate air-conditioning and clean sheets.)

The youngest two managed to find several friends at the campground right off the bat.  (They are still in that young and innocent stage of life where you can be best friends even though you've only known each other for less than two hours.  Sometimes I envy them.)  One of their new-found buddies was apparently pretty awkward.  While my younger children didn't really seem to care (or maybe they were too busy playing to notice his questionable social skills.  If so, good for them!), my oldest son who was helping me monitor swimming safety noticed the kid's weirdness. (The truth is that I was completely absorbed in a book and just managed to look up occasionally to make sure the kids hadn't drowned.  But in my defense, they are pretty good swimmers and their brother is legally an adult.)

My oldest son felt compelled to point out the kid's "weirdness".  He wasn't mean.  He just thought the kid was odd and quirky (almost to the point of being irritating).  In fact, he described his siblings' new-found friend as being "really weird... like homeschool weird". 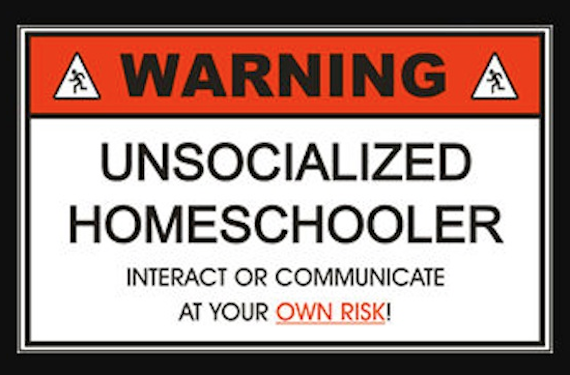 I know he was trying to be funny in referencing the cliched version of homeschooled children with their sheltered existence and lack of basic communication skills and awkwardness around strangers.  It's the myth that persists with very little foundation in reality.  Personally, I've met far more socially awkward children who are products of the public school system. (One might argue that I am one of those.  I might agree with them.)

It always comes down to the biggest argument I hear against homeschooling.  Socialization.

I've heard concerns about my children's socialization since we started this grand adventure and officially opened our homeschool (in the eyes of the great state of North Carolina) back in 2002, the school year my oldest turned seven and was "required" to attend school.  (Personally I believe we actually started homeschooling in February 1996.  The day he was born.  That's when he started learning, so it seems appropriate to me.)  I've learned the pat answers about socialization and can list them off in my sleep.


(Imagine me chanting these off in my most bored voice from a place of annoyed obligation.)

If they still don't seem convinced, I can randomly spout the research results of studies conducted on homeschoolers by the Department of Education as well as other government and private organizations, research that proves homeschool children exceed social expectations.
That's usually enough to make people realize that my children are more socially engaged than most "normal" children their age.  But just in case, I usually add the big kicker:


Why would I want my children to learn their social skills from a large group of kids their own age?  How are they going to learn how to relate and associate with real people in real situations under those circumstances?  I want them to learn their social skills from well-adjusted socially experienced people (usually adults), not from a bunch of barely supervised kids.  They learn social skills from experience and by example.  They have observed my interactions with librarians, clerks, cashiers, waitresses, the mailman, police officers, my friends, neighbors, family members, and perfect strangers since they were old enough to sit up and (kinda) pay attention.  That's how they learn appropriate social skills.


But they are still weird.

I'm okay with that. There is nothing "normal" about my kids. They stand out because they haven't experienced continuous herd-based socialization and standardization.  They haven't been indoctrinated in the same way as the majority of their peers.  They have not been marinated in consumer pop culture.  They are not peer dependent or adult phobic.  They have not been grouped and sorted and valued by test results.  They haven't been trained to respond to bells or believe that the only important learning is the learning that takes place between them, that no matter how engaged they may be, they must stop and move on to the next directed activity when it clangs.

They haven't been trained to do assignments without question or surrender their individuality to an authority figure who may not have their best interest in mind, who may be just trying to manage a classroom.  They haven't been conditioned to be passive and compliant, to only ask the acceptable questions, to wait for others to tell them what to think, what to do, or how to spend their time.

My children are not powerless.  They have the ability to remove themselves from bad situations, to change the curriculum when it doesn't meet their needs or spark their interest, or to delve more deeply into a subject that interests them. (I'm pretty sure my son has enough knowledge to prepare a thesis on World War II weapons that would make most college professors green with envy.)

They aren't afraid to question the control and power of authority figures or to question the actions and opinions of their peers.  Heck. The very act of homeschooling my children actively questions authority and bucks the status quo.  It's swimming against the current of social norms. Homeschooling shows a willingness to question the power and authority of the government and defy conventional behavior.  (I like to lead by example.)

What part of any of that is normal or typical or common?  It's all weird.  Odd.  Different.  Bizarre.  Homeschool kids are bizarre!

Their freedom and life experience gives them a perspective that is vastly different than the average kid trudging through the traditional school experience.  It sets them apart.  It makes them think differently.  They don't see the world through common filters.  They are weird.

Don't think for one second that they are not capable of "fitting in" in just about any social setting.  They understand etiquette and having "socialized" with different people of different ages from different backgrounds, they get the give and take of one-on-one conversations as well as the dynamics of group settings.  They are well-socialized individuals... but they haven't been assimilated.

And that's really what I want to tell the well-meaning busybodies who worry about my children's "socialization" - that I want my children to be weird, to be different, because the alternative is just unacceptable.  If by "socialization" they mean walking in straight lines and sitting still and being quiet and never having an independent thought, if they mean that they know their place, and do what they are told, and stay in their sorted social group, then no, my children are by no means "socialized".  And if that's what they mean, then I refuse to ever worry about my kids' socialization ever, ever again.

My homeschooled kids are weird!

And I like it that way.
Posted by Alice Jones Webb at 5:18 PM

Email ThisBlogThis!Share to TwitterShare to FacebookShare to Pinterest
Labels: homeschooling, the status quo