The "Male Privilege" of Circumcision

Today, four year-old Chase Ryan Nebus-Hironimus is scheduled for surgery. If you're like most caring and empathetic human beings, you should feel at least some faint feelings of dread and concern over the dangers of a small child going under the knife. Even though he is a faceless name on the internet, Chase is still a small child, and small children in big scary hospitals, being sliced with surgical scalpels cause normal people to feel at least a smattering of compassion.

You might logically assume that the little guy must have some sort of life-threatening condition or dangerous disease to be scheduled for surgery... any surgery.

But you would be wrong.

Today, Chase is being forced (against his mother's wishes... and quite probably his own) to be circumcised.

Sounds innocuous, right? Little boys are circumcised everyday. If you are a dude reading this, chances are pretty good that you've been circumcised. But Chase's case is not quite so innocuous as you might think. There's a lot more to this so stick with me. Here's some backstory:


Chase was born in 2011, when his mother signed a legal agreement which gave the baby's father (the two were not married and separated about a year after Chase's birth) permission to have him circumcised. Years later the surgery had still not been performed. The mother changed her mind, partially because Chase's age would require the surgery to be done under general anesthesia and all of the risks associated with it (including risks of brain damage and even death... a lot to ask a mother to sign off on when the surgery is not medically necessary). So, Heather Heronimus (Chase's mother) took her toddler son and became a fugitive for several months. She was finally found and arrested in May. She was then told by a judge that she would not be allowed to leave prison until she signed a consent for her son's surgical procedure. Still wearing handcuffs and weeping, she was finally coerced into signing the consent. The judge also gave full custody rights to Chase's father.


A lot can change in four years. What might have seemed like a cavalier and routine procedure when her child was born, seemed much more traumatic and dangerous and unnecessary as her child grew. Perhaps, Heather had become more educated on the risks and potential side effects of surgical circumcision. Or maybe her toddler son seemed more like a more sentient individual, maybe his body seemed more his own than it had when he was an infant in arms. Regardless of what transpired in those interim years, Heather was convicted enough to go into hiding to save her child from the consequences of the invasive procedure.

The consent form was signed under mental anguish and the threat of remaining imprisoned. Don't believe me? Take a look at this sobbing mother as she is forced to sign... 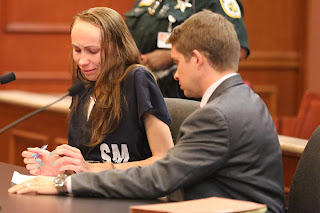 The tears and handcuffs make nice accessories for that prison jumpsuit, don't you think? Really completes the ensemble.

Is consent given under extreme duress really consent?

I don't think so, and neither does Heather's conscience.

Some time today, doctors will strap little Chase's body to a table, put him to sleep, and remove a healthy and functioning part of his body. They will perform this medically unnecessary and unwanted surgery on a minor patient. Sure they have all of the legal paperwork, but the means by which the paperwork was obtained seems horrifically unethical. And there's the terrifying fact that a third party with a piece of paper can have ultimate control over a little boy's bodily integrity.

If this had been an excision performed on a girl, the hullabaloo that ensued would have rocked the whole world. We would have heard from doctors and politicians and human rights activists from all over. They would have been crawling out of the woodwork in droves. Chase's father wouldn't have been able to find a single solitary doctor in this country to even contemplate performing the surgery.

But male mutilation? Nobody bats an eye. In fact, large portions of the population are looking at Chase's mother like she's fruitier than the third fruit salad to show up at the neighborhood potluck.

It seems pertinent to point out here that there is a federal law prohibiting female circumcision, which is a big-time huge glaring double standard, not to mention a direct violation of the 14th Amendment to the United States Constitution (That's the one that includes the Equal Protection Clause providing equal protection under the law to ALL people regardless of class or race or gender or... well anything).

Why is female genitalia considered so much more sacred than men's? Little girl's private parts are protected by federal law, while little boys' privates are traumatically mutilated as routinely as I sip my morning coffee. If men and boys don't have the right of personal bodily integrity, what rights do they have? Where are the mobs with their pithy signs and catchy chants of "My body, my rights"? Chase is about to get his wee-wee chopped for no good reason other than his daddy wants it... and people think his mama is the crazy one.

Maybe Chase just forgot to check his "male privilege" card at the door.

She signed the contract. If she didn't want it done, she shouldn't have signed it. Also, let's not compare male circumcision to female genital mutilation. It's not the same.

Oh... they are very much the same thing, but you're right. If she didn't want it done she could have just stayed in prison, disobeyed the court, and not signed the consent. I'm getting whiplash from rolling my eyes over here.

It's disgusting. I'm surprised there are men suing the people who are responsible for this unnecessary pain and irreversible damage. I wouldn't pierce the girls' ears when they were babies let alone mutilate their privates. Had we had sons, they would be whole.

Under no circumstances is female genital mutilation the same as male circumcision. The process of female "circumcision" involves removing the external nub of the clitoris and labias. (In very rare instances, the hood of the clitoris is removed but not the nub.) The skin is then sewn together to prevent sexual intercourse altogether, and in some cultures, to reduce the woman's libido and prevent the woman from feeling pleasure during sex. There is a very, very small hole left for urine and menstruation. When the woman marries, the hole is either ripped by the husband during intercourse or cut by a midwife or other health professional. First-time sex is often painful for a woman. Imagine how much more so when the hole has to be ripped or sliced to open it further for sex. When a woman is pregnant she is opened further to allow for childbirth. In many instances the woman is sewn back up after she has her baby. So a woman may undergo the procedures of slicing and sealing several times in her life. I've summarized the procedure and types of mutilation to avoid this becoming too long.

I cannot imagine how that could possibly be equal to male circumcision, which removes only the foreskin of the penis. They can still have sexual intercourse as soon as they can or want, and they are still able to experience pleasure. Not only that, studies have shown that their are some health benefits to circumcision unless there are existing physical abnormalities in the penis or if the male's health doesn't allow it. Again I am not going into further detail, because this comment is long enough as it is.

I respect the decision not to circumcise your sons and your reasons for doing so. I even see your point that this act takes away the male's control over what happens to his body. But there is no comparison to FGM and the motives for the procedure. I do believe men suffer as well because of the inequality between the genders, but whatever they experience is nowhere near as bad as what a female experiences. Women are still considered second-class citizens in most parts of the world. FGM is a glaring example of the injustices women experience.

Also, she lost custody of her son anyway. If I did not want my son to be circumcised, if I felt that strongly about it, spending time imprisoned would be worth it. My son's health is more important than my freedom.

You definitely make some sound points... but male circumcision is still genital mutilation. (Infant circumcision in particular is incredibly barbaric. But that's not what this particular story is about.)

And you're right. I would have stayed in prison. To be so convicted, to feel so adamantly that the procedure was wrong... well, it would have taken a lot more than incarceration to make me sign papers. My son's well-being is definitely more important than my freedom.