I suffer from a very serious condition. Unfortunately, there aren't any colorful activist ribbons or awareness months for this one, so people like me suffer in silence. It's a highly misunderstood condition which affects not just the afflicted, but also all of the people around them. We can't continue to ostracize the stricken. It's time to educate the masses about this difficult disorder. 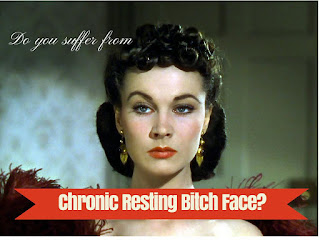 Chronic Resting Bitch Face (RBF), is a very real, scientifically proven and often debilitating condition striking the facial muscles, causing the sufferer to appear upset, pissed off, overly irritated, or generally like they want to stab someone repeatedly in the face with a fork. This condition exists in spite of whatever the afflicted may actually be feeling or thinking. In short, the facial expression does not consistently match the internal emotional state, often causing serious side effects.

Symptoms:
The signs and symptoms of Chronic RBF are wide and varied. Resting facial expressions can range from "My dog just died" to "Bitch, I will cut you if you don't leave me alone!" with many variations in between. The sufferer may just be completing a seemingly simple task like grocery shopping, but their face says they are ready to jump on you like an enraged crack-head ready to claw your face off. Other symptoms include uncontrollable scowling and furrowing of the eyebrows. Because the symptoms are similar, it is easy to confuse chronic RBF with a general disdain for life or even the Evil Eye.  The major difference being that sufferers of RBF have a generally happy attitude and probably are not involved in the Dark Arts.

Self-Diagnosis:
If you can answer "Yes" to three or more of these questions, you might be suffering from Chronic Resting Bitch Face:

- Has anyone ever gone out of their way to avoid you in public?
- Do people often ask you what's wrong?
- Has anyone ever asked you why you appear angry when you are in a perfectly good mood?
- Do you feel genuinely misunderstood?
- Have your children ever asked you why you look so grumpy all the time?
- Do people ever assume you are suffering from PMS even when it isn't your time of the month?
- Have people told you that you look creepy when you actually attempt to smile?
- Are people generally afraid of you?

Thankfully Chronic RBF is not contagious, although it may be genetic. Many sufferers of RBF actually notice their condition causes people to avoid close contact with them (which may actually be a good thing depending on your perspective).

Effects of Chronic Resting Bitch Face:
Many people don't understand the far-reaching effects that RBF can have on a sufferer's entire life. It can cause their children to cower in fear, put a strain on intimate relationships, and earn them the reputation of being a total asshole. Personally, I'm pretty sure that my then un-diagnosed RBF cost me the high school marching band presidential election of 1990, a devastating loss from which I still haven't fully recovered.

For some, it makes dating and making friends a complete nightmare. No one wants to be friendly or flirty with someone who looks like someone pissed in their Cheerios this morning.

RBF can put a strain on personal relationships. It can cause the unafflicted partner to feel as if they must walk on eggshells. They may feel that their partner is always pissed at them, even though they can't figure out why. It can lead to tension, confusion, and major miscommunication, possibly leading to bouts of ugly crying, general avoidance, and feelings of emotional isolation.

Learning to Cope with Chronic Resting Bitch Face:
There is no cure for RBF, however life isn't all bad. If you think you might be afflicted with Chronic Resting Bitch Face, learning to focus on the more positive aspects of your condition will make life easier. For instance, consider the fact that you will have fewer emotionally draining, overly-casual social interactions. Also, waiters will fall all over themselves to provide excellent service due to their fear of your potential for inhuman wrath. One great bonus: no one will ever mistake you for one of those annoyingly enlightened overly spiritual New Age gurus... even if you find yourself wearing Birkenstocks and a fair trade tunic.

There are some techniques that can be used to lessen the effects of Resting Bitch Face when you just have to appear socially acceptable. Smile... but not too widely. A large smile on the face of someone with RBF could come off as psychotic. Be sure to smile with your eyes. Try thinking about something warmly amusing, like frolicking puppies or laughing babies or those painful groin shots they feature on Funniest Home Videos, to help your smile look genuine. Be careful though, I've had people ask me "What's wrong?" while I'm smiling... apparently it's possible to look annoyed even when I'm smiling. That's the curse of RBF. The struggle is real.

Or you can just forget about what people think and just live your life. Be happy with who you know you are on the inside and not worry about people misinterpreting your facial expressions. Next time someone asks you why you are so annoyed, just tell them, "This is my face. Deal with it." If you're going to be labeled a bitch, why not embrace the label?

Posted by ajoneswebb at 2:30 PM

Just found your blog today. I am cracking up over this post! I also suffer from RBF. So happy that someone has put a name to my condition! :-) I inherited it from my father, who must suffer from RAF. Thanks for the laugh!