Mixed Messages in the Heroism of "Caitlyn" Jenner and Tess Holliday 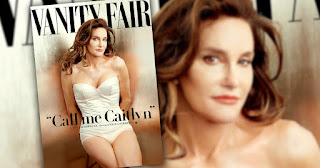 Everybody and their brother is talking about Bruce "Caitlyn" Jenner's breakout photo featured on the latest cover of Vanity Fair magazine. There has been no shortage of media hubbub. The media has been tripping all over it's own feet to gush about "Caitlyn's" bravery,  heroism, and courage. She's been called a role model for embracing her authentic self. She's even slated to receive a courage award at the ESPYs.

Social media is completely abuzz with all things Jenner, too. Her name has appeared on trending topics lists and her brand spanking new Twitter account collected over one million followers in a matter of hours, setting a new world record for fastest time to the one million mark (although we know from Hillary Clinton's Twittergate that all twitter followers are not necessarily real people. I myself have been offered twitter followers for purchase, but I assure you all 650 of mine were earned the hard way).

The cover itself looks a lot like any other Vanity Fair cover, soft lighting, big hair, a highly Photoshopped woman in a seductive pose. But Jenner isn't the typical cover model. "Caitlyn" started out as Bruce Jenner, 65 year-old former Olympic gold medal track and field athlete and step-father to reality television stars, the Kardashian sisters.

A lot of work went into the creation of "Caitlyn" starting with radical facial-feminization surgery, an invasive procedure which includes the reshaping of the forehead, the removal of bone around the eye sockets, re-positioning of the eyebrows, moving the hairline, and the filing of the jaw and chin. Jenner also underwent breast augmentation surgery, adam's apple reduction surgery, a nose job, and hormonal treatments to soften and feminize body features and naturally enlarge the breasts. His testicles have been surgically removed and his penis dissected and reformed into a neo-vagina in an extensive 6 hour surgical procedure.

The message here seems to be, if you don't like who you are, it's okay to mutilate your body until you achieve the picture of who you want to present to the world, AKA "your authentic self". It's a very brave and courageous thing... to change your body into what you want it to be.

Wasn't it just last week that everyone was all on board the Tess Holliday (the World's first size 22 supermodel) crazy train? When Holliday landed her magazine cover, she was also lauded as brave, heroic, and courageous. Just like Jenner she's been labeled a role model, but for very different reasons.

So in the course of one week, the media has slammed us with the message that blind acceptance of ourselves and our bodies (just as we truly are) is the stuff from which bravery and courage and heroism are made. And then WHAM! The media slams us from the other side with the Vanity Fair cover that shouts the message of do whatever it takes (including mutilating your body and dicking around (see what I did there?) with the delicate balance of the hormonal system) to be who you truly are.

It's enough to give a person mental whiplash.

While Tess Holliday is being applauded for loving her body regardless, Jenner is simultaneously being applauded for radically changing his body into something completely unrecognizable. Tess Holliday receives accolades for being who she is and refusing to change her body. Meanwhile, Jenner is a 65 year-old grandfather posing like he's a college-aged strumpet... so let's just throw some kudos his way, too.

I'm confused. Am I supposed to love my body under all circumstances, even if the condition of my body makes me uncomfortable? Or am I supposed to hate it and resort to any means necessary to make it acceptable? Please, media moguls, tell me what I'm supposed to think!

But what's even more confusing than all of the double standards and conflicting messages is why we are even spending so much mental energy on Holliday and Jenner in the first place. Because, to be honest, they are drawing our attention simply because they are odd, novelties, flashes in the pan of Society's short attention span. We are drawn to them in the same way our grandparents were drawn to sideshow freaks, paying their dime just for a full minute of uninterrupted gawking at the monstrosities behind the bars. Only this time we're paying the news stand price to gawk at them behind glossy magazine images. People like Jenner and Holliday have allowed themselves to be turned into pawns in the game of media profit. Just like the sideshow spectacles of old were being used for the profit of the circus barkers.

Why are we still gawking?

Don't we have something better to do?
Posted by ajoneswebb at 1:34 PM

These are all very good points! Especially the last one. There are so many more amazing things in this world than celebrities and fashion magazines! :) <3