8 Female Role Models Who Should Be Bigger Than Tess Holliday 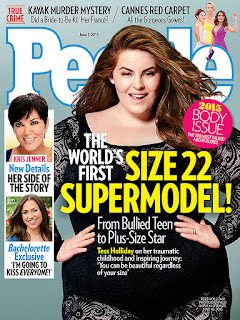 I was standing in the checkout line at Wal-mart, perusing the mind-numbing magazine selection and listening to my brain cells slowly dying when I saw the most recent issue of People magazine. I know I shouldn't look, but those trash mags draw my attention like mangled roadkill on the side of the highway. I know I should avert my gaze. I know I'll be utterly horrified, perhaps even scarred for life, but the carnage draws my eye in spite of it, and then I can't look away. This is but one of the reasons my brain cells commit harakiri in the aisles of Walmart (blatant employee incompetence and the smell of industrial-strength chemical cleaners are a few more reasons) .

It's People's annual body issue, and they chose perhaps the largest body in the modeling industry to grace it's cover. Tess Holliday, "The World's First Size 22 Supermodel", comprises most of the magazine's cover.

2015 has already been a big year (um... no pun intended) for Holliday. In January, she signed a contract with the U.K.'s MiLK Model Management, becoming the first woman of her size to land a contract with a major modeling agency. In March, she posed in ads for retailer Torrid's new fashion line (without Photoshop, so she's certainly brave!). She has a huge (really... there's no way around these awkward puns. Please don't hate me) social media presence. And now she graces the cover of People magazine.

As a self-proclaimed "body positive activist" and the originator of the viral Instagram #effyourbeautystandards movement, Holliday has been lauded a positive role model. Her supporters claim that beauty is a subjective thing and that, by bucking Society's accepted standards, she is helping women to love themselves just as they are. She's been called "awesome" and "inspirational".

But as a 5'5" 280 lb woman, she definitely has her critics. She is morbidly obese. Some see the way the media has embraced this new plus-size darling as a manic pendulum swing from the Auschwitz-chic runway models that seem to be the norm. As unhealthy as the stick thin models subsisting on little more than black coffee, chewing gum, and cigarettes might be, obesity brings it's own list of health risks (high blood pressure, heart disease, diabetes, joint problems, metabolic syndrome, sleep apnea, and cancer just to start the list). Holliday's critics worry that she is normalizing an unhealthy body standard, and that rather than empowering women, she is instead enabling them to maintain an unhealthy lifestyle under the guise of shaming the "fat-shamers"

So depending on which side of the fence you are standing, Tess Holliday is either the ultimate role model for women, full of empowerment and beauty and confidence... or she is an appallingly nasty representative of all things negative and unhealthy.

Meanwhile, I'm just standing back wondering why we think that supermodels (either underweight or overweight) should be role models at all.

Why are standards for acceptable role models so low? Is a pretty face and the ability to stand in front of a camera reason enough to want our daughters to emulate their character? Is the relatively passive and mindless act of posing for photographs a true achievement?

By continuing to consider supermodels heroines and social champions, aren't we maintaining the notion that a woman's value is based on her appearance? Or how well she dresses? Or how alluring she is? Even if we broaden the definition of physical beauty, we are still telling women that their worth, their meaning, and their identity rests on how they physically present themselves to the world.

Call me crazy, but I want better role models for my daughters. They really aren't that hard to find... although you probably won't find them on the cover of People magazine.

Here are 8 way better role models than a plus-size supermodel (bonus points to all of them for maintaining a healthy body weight):

1. Malala Yousifasi is a fighter, an activist and recipient of the Nobel Peace Prize. She survived being shot in the face and continues to speak her mind and fight for female rights (especially education).

2. Aung San Suu Kyi, human rights activist and Nobel Peace Prize recipient, gained international recognition when she campaigned for democracy in Burma. She was a political prisoner held under house arrest for over 20 years. She is currently the leader the National League for Democracy in Burma and is fighting obstacles to run for the county's presidency.

3. J.K Rowling didn't just make this list because my love and borderline obsession with her Harry Potter series of books. As a single mother, she took scribbled stories on coffee shop napkins and created one of the top-earning literary franchises EVER. Her writing inspired movies, theme parks, spin-offs, and several generations of children. Plus it's grossed billions of dollars. But the author's generous donations to charities keeps her from making the Forbes annual list of billionaires. Now there's a role model.

4. Ronda Rousey is the first and current  UFC women's bantam weight champion. She is undefeated in mixed martial arts, winning nine of her eleven fights by arm bar. She is also a former Olympic athlete and is a woman who shines in a male dominated sport, not because of her looks and sex appeal, but because of her raw skill.

5. Waris Dirie may have started out as a supermodel gracing the pages of Vogue and Elle, but the mother of two born in Somalia makes this list for being an outspoken voice against female genital mutilation, a violent practice which affects more than 150 million women and girls worldwide.

6. Mia Farrow is another former fashion model, but not just a pretty face. She's appeared in more than 50 films and won numerous awards, but is best known for her extensive work as a UNICEF Goodwill Ambassador. Time magazine named her one of the most influential people in the world in 2008.

7. Carol Greider is a molecular biologist. In 2009, she won the Nobel Prize in Medicine for the discovery of telomerase, an enzyme found on chromosomes that may help fight cancer and age-related diseases. She grew up with dyslexia and her difficulty performing on tests almost cost her admission into graduate school. Still, she credits her struggle with dyslexia for her successful research skills. "Perhaps my ability to pull more information out of context and to put together different ideas may have been affected by what I learned to do from dyslexia."

8. Ayanna Howard is best known for her leading the research team that developed the software for NASA's Mars-roving robots. Currently at Georgia Tech, she is directing the design of robots to be used to study the impact of climate change in Antarctica. She is also extremely active in the community, sharing robotics and engineering with K-12 students through community outreach programs, speaking at local schools, and hosting robotics camps for middle and high school students.

I'm glad Tess Holliday has self-confidence. Good for her. However, I can't stand behind her in celebrating morbid obesity. This is very personal for me. I am 5' 4" and once weighed 272 pounds. I wore a size 26 pants. Unable to get my weight, high blood pressure and cholesterol under control, and losing control of diabetes (all before age 50), and (because the list isn't long enough?) on the verge of knee replacement, I took drastic measures. I had gastric sleeve surgery last year. I'm 167 pounds now, perfect blood pressure, excellent cholesterol levels, no longer diabetic, and I'm running on that "bad" knee. I had no idea how good being healthy feels.