This past week I've received some pretty amazing compliments about my older children.  It means a bit more because... well, I'm closer to the finished product with them.  It's almost time for me to unleash those boogers out into society (God help us all!), and it's nice to know that maybe, just maybe, I haven't completely effed up this mothering gig.  (Although right now I have major doubts as I listen to the two boys practically screaming at each other because someone isn't cooking biscuits the right way.  Ugh.)

It's rough, this mothering thing.  While I have days when I completely feel like Super Mom, days when everyone gets along, the house is (mostly) clean, we've studied multiplication tables and American history, and I've cooked a nutritious meal that we've all enjoyed at the dining room table (and miraculously no one threw mashed potatoes up against the wall or told a sibling they smelled funny), most of my days leave me feeling like I've left something important undone.  There's always a nagging feeling in the back of my head, like I've left the house with the front door open and the oven on, or somehow failed to instill healthy initiative, persistence and self-motivation in my offspring.

So when I have my daughter's employer from her part-time summer job tell me how much they are going to miss her once school starts, because she's an impressive multi-tasker and great with the customers, it's a big deal.  When I have a friend of the family mention how wonderful my children are, how they seem genuinely grateful and honest and smart, it's a big deal.  When my oldest son's new boss tells me I have a great kid, that he's got a good work ethic, it's a big deal (even though the guy had had a couple of beers... and at least one glass of cava... but it's too late now.  It's been said and he can't take it back). 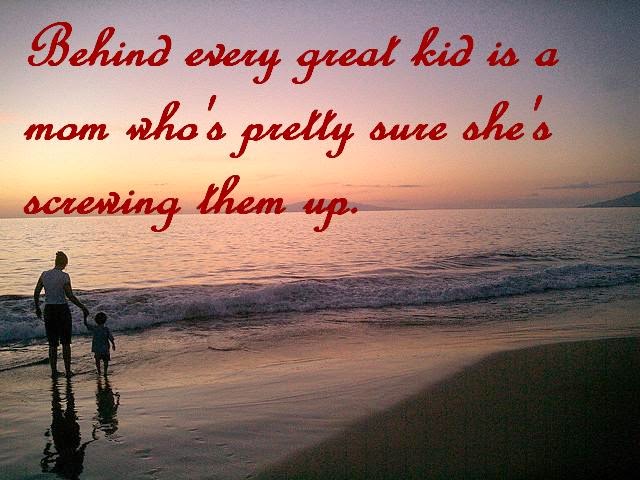 Because most days I feel like a failure, days when the house is a wreck, and I'm refereeing fist fights, and the kids spent four straight hours playing video games, and I've lost my temper and yelled and been generally nasty, and we've eaten McDonald's three days in a row, and the kids all kind of smell funny because I haven't sufficiently nagged them into actually bathing.  Most days I worry about the emotional baggage I'm heaping on them in moments of irritation and exasperation, and the gaps in their education I can't seem to fill, and how horrible their handwriting is, and how mean they can be to each other, and how all they really want to eat is processed macaroni and cheese.

I have this friend whose kids are awesome.  They are some of the most polite and precocious kids I've met.  And yet she worries (I'm talking about you here, Inie!).  She worries just like me that she's doing everything wrong.  She questions her decisions and agonizes over what books they read and what shows they watch and whether or not she spends enough time with them.  She agonizes over her perceived mistakes.  But her kids are great.

And I have plenty of other friends with awesome kids, kids who are motivated and smart and conscientious.  And guess what.  Those moms still obsess over whether or not they are doing it right.  But their kids are fantastic human beings.

Because behind every great kid is a mom who's pretty sure she's screwing them up.

It's because we love our kids so very much, and we want to do everything that we can to prepare them to be successful, caring, responsible adults who don't turn out to be mass murderers or weird cult leaders (or both.  Ack!).  And so we tend to blow our mistakes largely out of proportion. We see our minor shortcomings as huge character flaws.  We have lofty goals of what this mothering thing should look like, complete with Pinterest boards and June Cleaver houses and Aunt Bea's home-cooked meals.  But those goals are unrealistic for the average mom.  We are just really flawed human beings, not perfect little Stepford moms.

What we haven't learned yet, is that motherhood isn't a list of tasks to be performed or lessons to be taught.  We can't mark off the important bits of motherhood like some to-do list on the refrigerator whiteboard (I saw those on Pinterest.  I wish I was organized enough to actually do this.).  If we reduced mothering to task management it would lose it's heart and depth and soul... and that's where our effectiveness and strength as mothers comes from.

Children have a profound way of seeing the heart of a person, in spite of whatever else might try to get in the way.  So long as our intentions are for the best and our hearts are full of love for our children, I believe there is a measure of grace that pours over and washes out most of our shortcomings... and the rest can probably be sorted out by a competent and qualified therapist later down the line.

It takes a lot of courage to walk this path of motherhood, day after day, year after year, holding our heads high, hoping for the best, and believing that things will work out in the end, even when we feel like we are botching things royally.  Being responsible for the molding of another human being is a monumental task.  No one told us when they wheeled us into Labor & Delivery that becoming a mother was the easy part, that being a mom, actually walking this endless road, was an entirely different story.

But maybe we need to ease up just a little.  Maybe as long as we love them and feed them and try our best, then maybe we are doing okay.  Maybe the rest is just gravy.