The season of graduation ceremonies is almost upon us. The invitations and announcements are already starting to roll in. My Facebook friends are already posting pictures of their children in mortar boards and academic gowns with captions like, "Look how much Little Johnny has grown!" and "I'm so proud!" and "I can't believe this day is finally here. Little Johnny has worked so hard!"

Great. So you're proud of your kid. That's fabulous.

Which is really just ridiculous. Unless your kid is graduating from high school or walking across a stage to receive a college degree, just stop it.

By the looks of my social media feeds there are "graduation" ceremonies for everything: preschool. kindergarten, elementary school, middle school (and probably charm school and obedience school, too). While a group of clumsy preschoolers tripping over brightly colored "graduation" robes, marching down the aisle to "The Alphabet Song" while their parents maniacally snap pictures might seem adorable in theory, it's really excessively premature and possibly damaging.

Because what has really been accomplished to earn that march across the preschool stage? A mastery of fingerpainting? Superb story time skills? What future employer wouldn't check for where their new hires graduated preschool... or kindergarten... or elementary school? "Good thing your kid graduated from a good preschool or he might not have gotten into kindergarten," said no person ever. 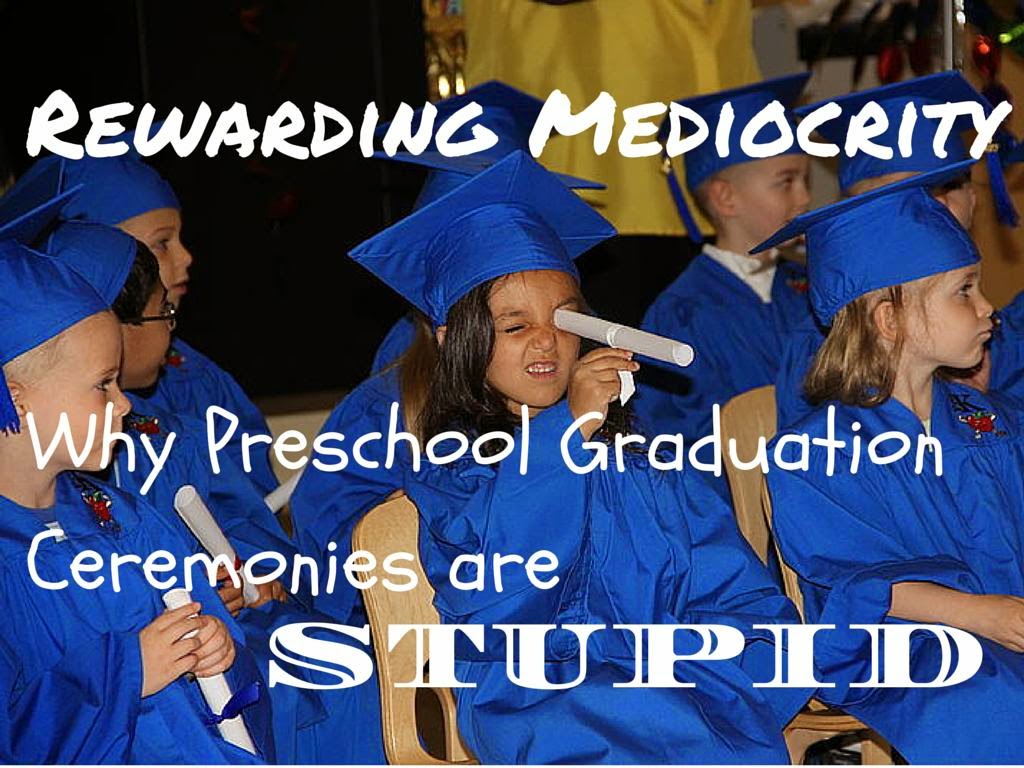 No. The only thing the nose-picking graduates gripping those preschool diplomas managed to accomplish was missing the age cut-off for kindergarten enrollment. All they've done is take up space as they progress through the system.

U.S. schools are currently struggling to keep up with global standards. The 2013 Programme For International Student Assessment (PISA) evaluation of students in 65 different countries found American students performing below average in math at every socioeconomic level. They barely make average in language and science. The low level of academic standards in U.S. schools is fairly well known, and yet parents and principals and local school boards continue to devalue the learning process. By the time a child has reached 18 and the completion of high school, he is liable to "commenced" almost half a dozen times. Graduation no longer represents the culmination of years of hard work and study. The ceremony has become empty and boring and blasé, the diploma something that is expected just for showing up.

I realize that the intentions of the school staff that put on these "graduation" shows are well-meaning. They want to celebrate the children and give moms and dads fodder for brimming scrapbooks. They want to make children feel good about themselves. But the key word here is "make". Adults can't "make" kids feel good about themselves. Attempts to force a sense of self-worth from without, with no real sacrifice or effort on the part of the individual, will come up empty every time. Self-worth has to come from the self... from the internal experience of hard work and struggle and the attainment of a goal set and reached.

Preschool and other lower grade "graduation" ceremonies are eerily similar to sports awards banquets where every little soccer player is presented with a trophy, whether they rolled around in the grass singing silly songs through every game or if they played hard, worked together, and actually scored goals. Trophies for just showing up, regardless of any real display of athletic achievement, don't build healthy self-esteem. It only devalues the athletic experience and the thrill of competition. Presenting every small child with academic honors, with no real academic achievement, doesn't build healthy self-esteem either. It only devalues education.

Children aren't stupid (in spite of the failings of our education system). It's not difficult for them to figure out that trophies and graduation certificates for everyone means no one has to try very hard... at anything. Giving accolades for nothing special only ensures that nothing special is ever created or thought or worked for. There is no motivation to strive for great things. Because why try if you don't have to do anything or be anything or think anything? You'll just get handed the reward at the end anyway.

But at least mom will get some awesome pictures of her sweetie in that super cute cap and gown, even if it is little more than a Halloween costume. It doesn't mean anything because he hasn't done anything worth rewarding.

It's all just pretend. Kinda like that rolled up diploma... symbolic of nothing other than our feeble attempts to educate the masses... or raise adults that don't have inflated egos or a false sense of self-importance and entitlement.

The only real winners in this "graduation" mania are those who jump on the commercial opportunities the events provide, the photographers and companies selling graduation paraphernalia (like caps and gowns and invitations and tassels and whatever else parents are willing to dish out money to mark their wee ones milestones).

At least someone is benefiting, because the kids certainly aren't.
Posted by ajoneswebb at 2:26 PM

Ridiculous! This is one of my pet peeves.

Daughter 1 "graduated" eighth grade. She didn't benefit in any way other than a new dress. Stupid. Daughter 2 was transferred to a non-ridiculous school (for many reasons) where eighth graders were recognized at the end of the year program because they were leaving. She didn't shrivel up and cry in a corner or suffer for not graduating.

I asked why the first school made such a fuss over eighth grade. "It's the only graduation some of these students will have." I guess they should stay in school if they want to graduate, eh? Ah well, you made it to school every day this week so here, have a trophy.

Wow. I don't think that possibility that it might be the only graduation they will experience is an excuse. If they really wanted to graduate, then they should stay in school, study, and work hard.

It's an insult to give someone a mock up of something that really means something, just because they might not get a chance to have the real thing. That just broils my biscuit, to use a Southern phrase.

So very well put. So very, very true. And yes, the piles of meaningless, useless, and wasteful trophies accumulated in my attic until they made their way to the dump. What a relief despite my guilt in contributing to filling up the landfill! Well said, Alice and it needed to be said. I hope the whole world reads these important words.

Douchy parents with no lives are the ones who perpetrate this foolishness on thinking, productive people. Who has TIME for this? Mila Kunis and Christina Applegate just did a movie where all this crap was the center of the action. Cristina Applegrate ruled the PTA with an iron fist. Mila Kunis does her best to make Christina Applegate's pretentious crap look even more ridiculous than it is by definition. My wife and I just had a baby and everyone is saying "you're gonna have to sign up for soccer" and "you're gonna have to bake cookies for bake sale." Hey. Guess what? My wife and I don't have to do one thing we do not CHOOSE to do. We run businesses and have lives. We are not your cookie messengers. Neither of us have any interest whatsoever in PTA, bake sales, or other groupthink activities filled with nothing but mundane conversations, lame oneupsmanship contests and not to mention it's just a HUGE waste of time. Don't like our point of view? Good. We don't want you anywhere near our kids. Our people are the ones who have fun parties with alcohol and cool music and sit around talking trash about the losers who put this stuff on. Your only recourse is to talk trash behind our backs with all your friends who are all sad clones of each other while we count the massive amount of money we earn and travel the world flying first class. Have fun eating cookies. I will be on the Spanish coast eating goat cheese and drinking really expensive wine with people way more interesting than you and your kids.

You are all a bunch of self indulged people. You are the reason that kids grow up to be mean, selfish, and entitled. To you it may not seem like hard work to get through pre-school, but that just is not the case. I actually teach preschool and will be having a small celebration for my students that will be transitioning to Kindergarten. I have students that started the year off with no English, students that didn't know their own names, students that showed up everyday and worked to finish my class. I will be celebrating this accomplishment.

You can sit around and party with all your money, but know that in the end the parents that participate will have children who actually want to take care of them when they are old.

Have a pizza party if you want to celebrate completing a grade. The kids don't know or care about graduation. It's the parents who are kinda bullied into making a big deal out of something that's not. And now parents HAVE to participate to not emotionally scar their 4, 5, and 6 year olds.

This is so true. I'm contemplating a leave of absence on Facebook until "graduation season" is over. I'm so over the child-centered universe we now live in. Congratulations, your kid graduated 8th grade. BFD! I even have one friend who is doing picture collages for her kid who is moving from 9th to 10th grade. Get a damn life.

This is so disgustingly on point

Dumbest things ever. Why would anyone think these are appropriate? Did anyone not pass preschool and went go on ?no. Then it's stupid

I fucking love everything about this article. "Graduating" preschool is absolutely ridiculous. Graduating 5th grade and 8th grade is just plain asinine. We can't keep congratulating kids for things that are expected of them.