Masculinity - Is it Toxic or Heroic?

If you haven't heard about the mass shooting that took place in Orlando, Florida this past weekend, the deadliest mass shooting by a lone gunman in U.S. history, then you must be living under a really nice rock. I wonder how you're getting any sort of decent internet connection under there. Might you be willing to scoot over just a pinch and make room for me?

Because I've pretty much had it.

As should probably be expected, the pro-gun/anti-gun debate commenced in full force before the 49 bodies even reached room temperature, their cell phones still buzzing from incoming desperate texts of "Where are you? Are you safe?" We haven't even been able to get through a single moment of silence in the House of Representatives without a political stampede.

In the days since the tragedy at Pulse nightclub, we've rushed to place blame. We've blamed ISIS, gun culture, mental illness, terrorism, Muslim extremists, bigotry, gun-free zones, Christians, assault rifles, immigration, men kissing, the NRA, a lack of security, gun show loopholes, and the FBI. I'm surprised that the Tooth Fairy and Santa Claus have yet to make the media's list of causes.

In a desperate attempt to make sense out of a senseless massacre, we've been grasping at fragile straws, blaming everything and everyone except Omar Mateen. 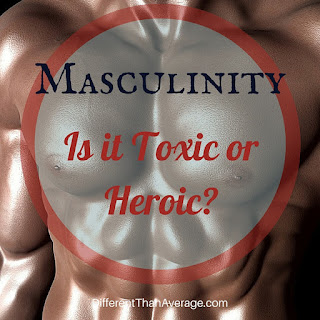 Since none of those causes seem to stick, the newest cause du jour is masculinity.

Louis Staples writes in the Independent, "Since Sandy Hook, there have been an astonishing 998 mass shootings in America. Two of the perpetrators were Muslim, but all were men. Surely this suggests that this is a wider problem with masculinity." Similar sentiments have been shared in The Atlantic, Salon, and ThinkProgress. Planned Parenthood even jumped in with it's own masculinity-bashing tweet:

Perhaps they have a point. It is hard to argue with statistics that show murder is an overwhelmingly male act (Ninety percent of murders in the United States, where the gender of the offender is known, are committed by men). And mass murder has even more damning stats with 98 percent of them perpetrated by men.

Perhaps it is the masculine traits of assertiveness, strength, aggression, dominance and control that combine to create so many grieving mothers. When viewed through such a constrictive lense, it is easy to conclude that masculinity is a deadly and destructive vice that needs to be systematically eradicated.

But here is something else I know to be true: those same masculine traits of assertiveness, strength, aggression, dominance, and control could perhaps have saved at least some of those victims in that Orlando nightclub. As the bodies began to hit the floor, desperate calls to 911 were being made. They were pleading for help.Those victims, bleeding out and fearing for their lives, wanted someone to dominate their attacker. The situation called for a virtuous act of masculinity. Help was desperately needed and expected, not in the form of feminine sensitivity or gentleness, but in the type of aggressive strength and control that a well-trained police force would bring, or even one person willing to risk danger to disarm a madman and save themselves and the people cowering in fear around him.

Interestingly enough, statistics prove that 70 percent of Emergency Medical Technicians, 87.3 percent of police officers, and 96 percent of firefighters, are male. These are the people that rush toward danger, that protect the weak, that help the helpless.

So yes, while most violent acts are committed by men and their "toxic masculinity", so are most acts of valor and bravery. Masculinity isn't always toxic and nasty. It is more often virtuous and courageous. Masculinity isn't misogyny and homophobia, posturing and compensation. Masculinity is action and strength and bravery. It is using inherent power, not to harm, but to serve and protect. That's what men do.

I know that I am just one person, separated from the Pulse incident by miles, my information filtered through media accounts, but I am baffled, angry, and distressed, that one man stood against 300 people and managed to kill 49 of them while wounding another 53, no matter how well armed that individual or how scary his weapon may have appeared. It may be too soon, the scars still too fresh, the hurt still too raw to say this, but I'm going to say it anyway. What was sorely lacking Saturday night was action and aggression and dominance by the revelers in that nightclub. By all accounts, not one person on the inside attempted to stop that psychopath. Not one person went down fighting. I know that people will holler and type strongly-worded responses about how I am victim blaming, but I hope that it happened, and we are just not privy. I hope that at least one person inside showed immeasurable bravery and decisive force. I hope at least one of those 49 victims went down swinging in an effort to save himself and his neighbors. I hope they didn't all run and hide and passively wait for someone else to save them.

While the masses are raising boys to be sensitive and empathetic and compassionate, let us not forget that we should also be raising them to be courageous and strong and self-reliant. The world needs men. We don't need more candlelight vigils and hugging-it-out and "holding space". We need people who stand up to injustice and hate, who swallow their own fears and muster their own courage. That is what saves people.

I know that it isn't politically correct, but maybe it is okay to tell our boys to "suck it up", to fight their bullies, and face their fears. Maybe it is okay to tell them to "man up", at least in the sense that they embrace the masculine qualities that dominate a desperate situation, that take action even in the face of fear, that don't blindly follow the masses fleeing in panic, or quietly wait with hands politely folded for someone else to do something.

Because the world needs more of the virtuous variety of masculinity. That's the only kind that will save us from the other.

Posted by ajoneswebb at 1:30 PM

Poor little me, I got my heart broken and I started questioning the very existence of my significant other. And I'm not fully responsible for my emotions am I? Well, sadly you are...Stop questioning masculinity and start questioning your own limitations and you will be able to appreciate masculinity.