But What if They Outgrow Us? Dear God, I Hope So

I am not a short person.

Although both of my sons and several of my taller coworkers would strongly dispute this, I am in fact incredibly average when it comes to height. Measuring in at 5 feet 4 inches tall, I am right on par with the average American female, at least according to the Centers for Disease Control and Prevention.

And yet, I am short when standing next to my children.

After posting a photograph to social media this weekend, one in which I am standing smiling next to my youngest child, someone asked when she had grown taller than me. Which can't be right. She is my baby. My youngest. She's only twelve.

And yet, she is taller... by almost an inch.

When did that happen? Someone forgot to remind me to pay attention. I swear I only looked away for a brief moment, got distracted by the laundry or the dust bunnies or that last really horrible season of The Walking Dead. I didn't see it happen. And yet, here we are.

When my children were small, with shorter legs and tiny feet, they used to have to run to keep up with me. It took them at least two strides to every single one of mine, their small hands clinging to mine, being pulled behind me through parking lots and across streets, down grocery store aisles and around fast food dining rooms. They struggled to live life at my pace, afraid of getting left behind. I was so much bigger. Faster. Stronger. More than them. 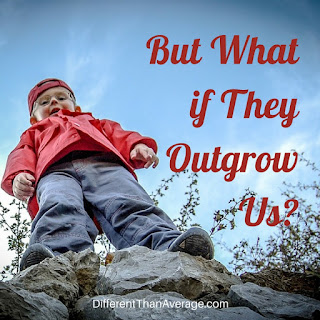 They are so much more than me. All of them.

Last week I watched my youngest son handle himself with grace and dignity in a difficult situation. He was confronted by another parent, accused of some nasty acts of bullying. In the face of an angry adult, pointing fingers and questioning his character, he spoke evenly and calmly. He explained himself with such poise and maturity that I could hardly believe what was happening. I, on the other hand, pretty much lost my shit. Looking back on the incident, I realize that I had let emotions get the best of me, that I had too easily lost patience, that I had behaved like a child who just wanted to run away. In that moment of confrontation, I realized that my 15 year-old son is a much better human being than I am.

Meanwhile, my youngest, the one who so recently surpassed me in height, could totally own me on the dojo floor. She is far better at martial arts than I will probably ever be, in spite of my higher rank and life experience and general mastery of adulthood. She is faster and stronger and more skilled. And on top of it all, she carries it well, with a quiet confidence tempered by humility. She, too is a better human being.

My oldest daughter is the kind of go-getter I have never been. She is smart and driven and competitive. This past Saturday, I watched from the audience as she spoke to an auditorium full of strangers with a clear voice and confident words, without nerves. And she walks in heels much more skillfully than I do. Again, she's a better human.

And my oldest son just earned his Army jump wings. He may be one of the bravest and strongest men I've ever met. He lives his life with a level of integrity, loyalty, and grit to which I can only aspire. He's going places and now that he is Airborne, he can get to those places much faster than the average soldier.

The day of my oldest son's basic training graduation was an incredibly proud day. I cried big fat soppy tears. But his graduation wasn't only a culmination, a marking of hard work completed. It was just one step, a launching point, to bigger things. He is living a life, learning things along the way, that I, as his mother, will never understand.

On that day, when things had quieted, the excitement and chaos calmed, and my husband and I were alone, we marveled at how that little boy in footie pajamas had grown so tall and so strong and so brave, in what seems such a short time. We knew he was starting a life without us, that he had big plans and bigger dreams, that he would be learning and experiencing things that we could never have provided him.

"I just worry that he's going to outgrow us," my husband had said, a little misty-eyed. And while I understand what he meant, as we both waded through what seemed like a huge goodbye to the little boy we've loved so deeply, as we watched our adult son march off to places we can't follow, all I could think is:

All four of these incredible people, the ones I am truly blessed to have raised and honored to call my children, are more than me. They've already outgrown me in so many ways. They no longer struggle to live life at my pace. Instead they set their own gait, measure their own miles, stretch for their own goals. They are so much more than I am.

They are speeding on through life toward their own destinations, learning and mastering new things, things I struggle to understand (like tech support and teen lingo).

And I find I'm the one rushing to keep up with them. Stretching my own stride to keep their pace, stretching myself to be the kind of mother they deserve. They inspire me to be better, to reach higher, to live braver, to breathe deeper. I find myself setting larger goals, working to be stronger, faster, bigger than I was just yesterday. Because I want so desperately to keep up. I don't want to get left behind, and I certainly don't want them slowing down to wait for me.

We should be hoping and praying and actively encouraging them to outgrow us.

Because the world needs better people than we are. Our children can be those people.

And they can make us better people in the process. The world still needs us, too.
Posted by ajoneswebb at 2:27 PM

This is so true. I have two, 10 1/2 and 6. The time just seems to go so fast. That said, reading this gives me an idea of how I want to be as a parent. My own family wasn't so healthy regarding the growing up of children. There seems to be a need that the children would continue to depend on the parents and also the parents on the children. My own mother never really lived on her own until after her parents died; she was in her mid 30's. Even married, she lived with them. So reading things like these, I take and tuck away to remember years down the line when my own will be ready to venture out into the world on their own.