What Other People Think About Being Offended 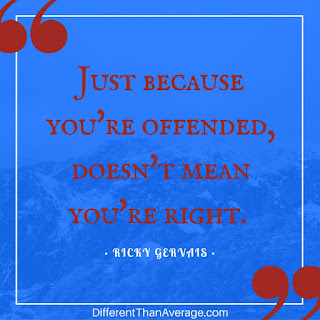 It's been an emotionally charged week for me. Hot on the heels of two major political circuses (also known as conventions) both of which left me feeling demoralized, disgusted, and more than a little afraid, I landed right in the middle of some rather agonizing personal drama. I'm not one to go looking for drama, but I apparently am not particularly skilled at avoidance. Sometimes drama manages to find me in spite of my best efforts.

Interpersonal drama plus the current political abyss plus the knowledge that my son is parachuting out of airplanes has not been a great equation for inspired writing. Each time I have sat down to write this week, I've been afraid of what might come spilling out. I know that I'm going to offend someone. While you might think that offending people is one of my favorite pastimes, I'm just not feeling up to the emotional fall-out this week.

Everyone around me is offended. It's in the news, on my social media feeds, and bouncing around my circle of friends. Khizr Khan offended Donald Trump who offended Khizr Khan (and most other Americans). Hillary's face offends people. Police officers are apparently offensive. My children offended some other children at a birthday party, which caused a whole lot of other people to be offended.

I'm offended. You're offended. Wouldn't you like to be offended, too?

The world is one great big giant ferris wheel of people being offended. This is frankly not a ride I enjoy. It makes me want to vomit, and I desperately want off. I'm still not in a great emotional space, so instead of forcing you to endure my scattered thoughts, fervent rants, or whiny complaints, I will instead leave you with the words of other, more emotionally stable individuals.

And, yes... I realize that this post is probably going to offend someone. Whatever.

Quotes on being offended:

"Apologies; our cultural obsession with them isn't actually about being offended, or simply needing to hear, 'I'm sorry.' It's not really about right or wrong. It's about wanting to throw a rock in the dark and hear something break." ~ Jim Norton

"If you are on a continuous search to be offended, you will always find what you are looking for, even when it isn't there." ~ Bill Kellogg

"When people do not respect us we are sharply offended; yet in his private heart no man much respects himself." ~ Mark Twain

"Just because you're offended, doesn't mean you're right." ~Ricky Gervais

"To be offended is a choice we make; it is not a condition inflicted or imposed upon us by someone or something else." ~ David A. Bednar

"If you are offended, it's your problem." ~ Salman Rushdie

"An offended heart is the breeding ground of deception." ~ John Bevere

"Being offended is part of being in the real world." ~ Courtney Love

"Anything designed to be inoffensive isn't worth your time - - life itself is pretty offensive, ending as it does with death." ~ Holly Lisle

"If you are too afraid to offend anyone, then I'm afraid you may not be able to do anything remarkable." ~ Bernard Kelvin Clive

"After all, its in the way an insult is received that makes it an insult. You can't really give offense unless someone takes it." ~ Portia De Rossi

"Nobody has the right to not be offended. That right doesn't exist in any declaration I have ever read. If you are offended it is your problem, and frankly lots of things offend lots of people.

I can walk into a bookshop and point out a number of books that I find very unattractive in what they say. But it doesn't occur to me to burn the bookshop down. If you don't like a book, read another book. If you start reading a book and you decide you don't like it, nobody is telling you to finish it. To read a 600-page novel and then say it has deeply offended you: well, you have done a lot of work to be offended." ~ Salman Rushdie