What I Really Want to Say About the Virginia Gun Rally

This past Monday, I was in Richmond, Virginia for the huge and controversial “Gun Rally.” (It was actually “Lobby Day,” but I won’t get into semantics.) 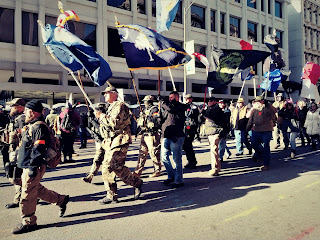 If you’ve been following me, you know I quit my “real” job in October to have more time for my dream job as an outdoors/firearms writer. It’s a pretty cool gig, I’m not going to lie. Low stress, high reward. Sometimes clients pay me for range time or send me cool products like high-end FFP scopes, chronographs, and cutting-edge ammunition. (Have I mentioned I love my job?)

I was planning to head to Richmond to support the rights of my family, friends, and hunting buddies in Virginia, no matter what. However, I pitched an article idea about covering the Richmond rally to one of my regular clients. They thought it was awesome, so they basically paid me to go to Richmond and write about it.

As a bonus, I got to claim travel expenses as a tax deduction. And although TAXATION IS THEFT, I might as well claim what I can and keep myself out of jail.

However, there was one small caveat to what seemed like the perfect arrangement.

“Alice, can you keep it as non-controversial as possible? We have customers that support both sides of the aisle, and we don’t want to alienate anyone. Can you make it compelling without lambasting any political party too badly? Okay. Thanks.”

Here is the article I came up with, taking major pains not to include pictures with too many Trump flags, leaving out the life-size guillotine, and sticking to non-controversial facts. 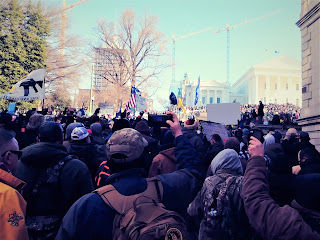 I understand that publishing a non-controversial article makes good business sense. However, sometimes it also makes for mediocre content. This article is definitely not my best work.

After submitting the article, I still felt kind of antsy and grumpy, like someone should throw me a Snickers bar from a safe distance.

I think it’s because holding back controversial viewpoints is not my forte. And while I appreciate the paycheck and the tax deduction (TAXATION IS THEFT!), there was still a story inside me, and it was fighting to get out.

So here are some of the things I really wanted to say.

First, Governor Northam sucks and so does the mainstream media. Not that most people don’t already know that, but I needed to get it off my chest.

Leading up to the event, all Northam and the media could talk about was danger and violence and racists and white nationalists.

Law-abiding gun owners, myself included,  are tired of being lumped in with these radical groups.

I’m pretty sure these guys in particular are pretty tired of the racist/white nationalist label.

I’m posting this just in case the media doesn’t. Are these the white supremacists that they were talking about? #2A #IStandWithVirginia pic.twitter.com/RDM0ZiHjkv
— Bryson Gray (@SuriusVsVodka) January 20, 2020


Lo and behold, all the predicted danger of white nationalism was a ruse. There were no swastikas, or Neo-Nazis, or skinheads despite what this guy tweeted.

all I'm saying is that if your reaction to minor gun control legislation is to cover yourself in swastikas and go fucking apeshit on Martin Luther King Day, you're probably not a good avatar for responsible gun ownership
— Jeff Tiedrich (@itsJeffTiedrich) January 20, 2020

(I also have problems with his “minor gun control legislation” comment. It is anything but minor, but that’s probably a subject for another day.)

I challenged someone spreading this rumor on Facebook to show me some proof. They couldn’t provide any.

And we all know if there had been one lonely guy with a swastika, he would have become the media’s poster child for the rally. That I haven’t seen a single swastika image out of the Richmond rally makes me pretty confident there were no swastikas there.

If there were white supremacists in Richmond, they were keeping it on the down-low, choosing not to use Lobby Day as a platform for spreading their brand of hate.

There were also no waving Confederate battle flags. This one surprised me just a little. It is the Battle Flag of Northern Virginia after all, and Richmond was the capital of the Confederacy. Sorry Alexandria Ocasio Cortez, you’ve been caught in an outright lie (or at least an extreme  exaggeration).

I did see one guy wearing a Confederate flag patch (among many others) on his jacket and one Confederate flag sticker on the stock of a rifle. I saw no one brazenly waving what many consider a “banner of hate.”

So much for Richmond turning into Charlottesville 2.0. Even though media personalities and alarmist politicians could not stop comparing the two for weeks leading up to the event.

What I did see were tons of Gadsden flags, which seems appropriate for protesting the potential loss of Constitutional rights.

There were also a ton of Virginia flags. Also highly appropriate considering the location and the seal’s declaration of “Sic Semper Tyrannis.” Thus Always to Tyrants.

And yes, there were some Betsy Ross flags (which are apparently offensive now) and Trump 2020 flags (I know. You’re triggered).  But I also saw a rainbow flag and, my personal favorite, the flag of Hong Kong.

Despite the apparent absence of white supremacists, there were highly visible representatives from minority groups, including Democrats for Guns, the LGBTQ community, Black Guns Matter, and Hispanic gun groups. There were throngs of women open carrying, declaring they would not become victims, refusing to relinquish their right to protect themselves.

As my favorite meme of the day quips, “Worst White Supremacist Rally Ever!” 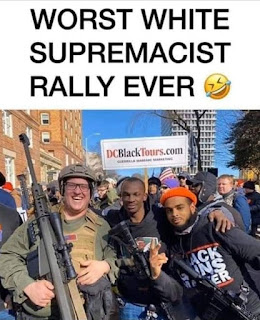 I’m still reeling from the experience. I almost backed out of my plans to attend due to the prevailing rumors of violence. But I am so glad I didn’t. It was definitely one of the best displays of freedom, friendliness, and personal responsibility I've ever seen.

However, slipping back into my normal routine on Tuesday morning was a little shocking. What I was reading from some people on the internet was not what I experienced in person.

My social media feeds were packed with posts claiming that Richmond had been “invaded by armed racists.” That the city had been “held captive by an occupying militia.” One “friend” even claimed we couldn’t call the event “peaceful” or “non-violent” because the “threat of violence was everywhere.”

Hold up! That last one may be right.

But that was kind of the point, Dear Internet “Friend.”

But it was also more than that.

It was also a chance to demonstrate the fact that general, law-abiding citizens control more firepower than sweet Governor “Blackface” Northam could muster, even in a state of emergency.

Before you start calling me delusional, consider these numbers.


Reports on rally attendance vary, but there were at least 22,000 people there. Most of them were armed. Some of them heavily.

Even on a freezing Monday morning, after some major scaremongering that kept plenty of concerned patriots away from Richmond, Northam’s forces were completely outnumbered. And that’s if every police officer and weekend warrior at his disposal showed up willing to confront their friends and neighbors. (He certainly can’t ask local sheriffs to help him out. They are largely responsible for leading Virginia's 2A Sanctuary movement, bless their freedom-loving souls).

On a national level, private citizens own more than 400 million firearms. That’s one hundred times the amount all four branches of the United States military combined has at their disposal. I’m just pointing out that civilians have access to some pretty respectable firepower.

Yes, I know that Bubba’s AR-15 is no match for the prowess of the greatest military force in the world. But I’m going to remind you here that a bunch of guys in flip-flops and hand-me-down Russian AKs have been befuddling that same world power for decades now.

Now, to all the whiny, latte-sipping, skinny jeans-wearing scoffers that ask, “Why do they have to bring their rifles? That’s just over the top.”

Yes, Brandon. It is over the top. That’s the point.

Go ahead and make fun of that sea of Carhartt and camo that flooded the streets of Richmond on Monday. But you completely missed the message, which is a boisterous “We Will Not Comply!” 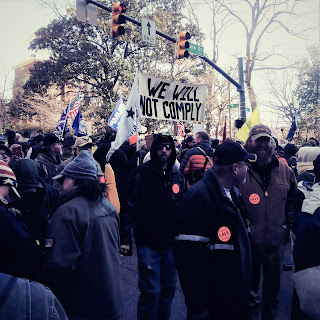 Sure the message was delivered peacefully, responsibly, and without incident. But it was also made while showcasing a tiny fraction of the hardware capacity free citizens have at their disposal.

That is the whole point of the Second Amendment. It isn't about deer hunting (although venison is certainly a tasty side benefit).

If the government wants to deprive citizens of their god-given rights, the Second Amendment ensures power-hungry politicians will have to work really hard to take them. Richmond was simply a reminder. Let's call it a peaceful threat of violence, shall we.

Sometimes the threat of violence is more productive than actual violence. Let's hope that's the case this time around.

On Monday, I got to be part of a diverse group of polite, friendly, well-behaved individuals, all  unified by the common cause of liberty. It is an experience I will cherish

I often tell people, “I am a proud gun owner.”

The behavior of my fellow gun owners in Richmond makes me even prouder to be part of this inclusive group.

Rally participants even cleaned up after the crowd, going so far as to scrape discarded “Guns Save Lives” stickers off the Richmond pavement. Capital Square and surrounding streets were actually left cleaner than they were before the rally began. That’s something that can’t be said about some other groups that protest for the sake of protesting.

Thanks for keeping it classy, guys.

After the Richmond Rally... 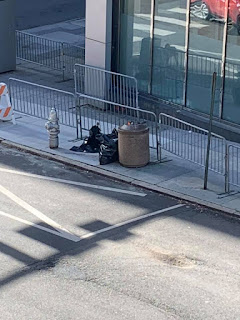 After the Women's March.... 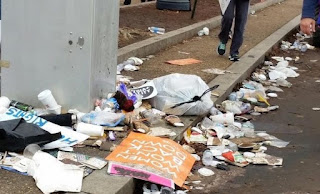 I know which group I would rather be associated with.

Besides, I look better in camo than I would in one of those pink things with ears.

"But women have a right to walk down the street alone at night without being afraid."

Honey, you're absolutely right. That's why I carry a Glock.

Which also happens to be why I was in Richmond on Monday.
Posted by ajoneswebb at 2:38 PM

Keep up the good work... Love this article and also several of the others you have posted.