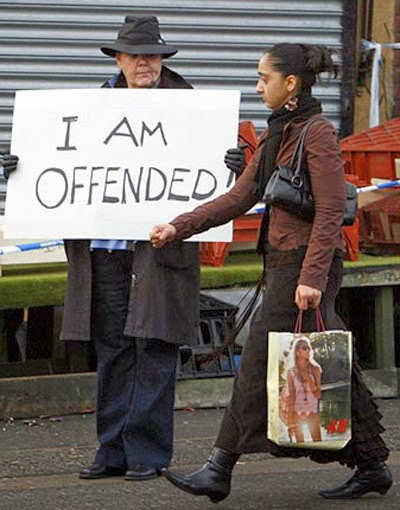 Seems like I'm getting pretty good at offending people.  Not that I've been practicing or anything.  I'm not even sure how I would practice something like that....or why it would be something to strive to be good at. And believe me, I am NOT trying.  In fact, I tend to be kind of a people-pleaser (not a confession I'm particularly happy to make) and very much a peace-keeper (I'm blaming my mother on that one.  Although, in many situations, it's totally not a bad thing.)  So it's been kind of stressing for me to find so many people offended by something I've said (or not said) or done (or not done) or written (or not written...seriously, I'm not sure there's any winning here).

And then I find myself being offended that they are offended.  Real mature, right?

But I'm not walking around trying to offend people.  Who does that?  Other than uber conservative talk show hosts and opinionated grandmas?  I try on most days to practice some level of empathy, although I often fail miserably (especially before coffee).   But even on my best days (which are usually my most caffeinated days) someone is liable to get their panties knotted even if I just walked in the room.  (I blame it on just not paying attention...and apparently having a natural perpetually grumpy look.)

Being offended by someone kinda feels good (I know this because I come from a long line of easily offended ancestors...and a family that can pass a grudge down through generations).  Not in a warm and fuzzy kind of way (and certainly not the way eating chocolate and reading a good book while wearing warm fuzzy socks makes me feel good), but in a rather crude, "I-feel-morally-superior" kind of way.   Still not very mature.

But we are all human beings and we are all (hopefully) trying to evolve, to be better people than we were yesterday, and self-awareness is a giant leap in that process.  The biggest problem with being offended is that it is a completely narcissistic injury.  It's all about me.  Why I'm hurt.  How I'm being treated.  How I feel. It's a big bruise to our egos, which means we are living completely inside of ourselves and expecting certain responses from others because we deserve it damn it! Not very fair to the people on whom we place our expectations (and they probably aren't even aware of our expectations.  We don't usually tell them....especially if we are women), plus it's a pretty vain and arrogant way to approach life (But I really, really, REALLY want it to be all about ME!)

As much as it might crassly feel good to be offended (and therefore a morally superior victim), it is counter-productive to any sort of personal growth or resolution to the unpleasant situation that caused the offense in the first place.  Being offended, and all of the resentment that quickly builds up like a massive brick wall, clouds our perceptions and obscures the objectivity needed to settle a disagreement or mend a hurt (especially when the hurt is our own).  It shuts down other mental processes and constrains us in undesirable ways.  It's like being stuck in a box of our own making....and we don't just need to think outside of this box, we need to get rid of the box altogether.

I'm not trying to say that offending people on purpose is acceptable.  People rarely set out to purposely piss someone off...if they do they are just being jerks (and that's putting it nicely).  In fact, most of us are so self-absorbed that we don't even realize that we've offended someone.  It's kind of how most humans work.  We shuffle through life with blinders on, focusing on our own problems and the drudgery of our own struggles.  If I've offended you, I was probably thinking about the mounding piles of laundry or my unpaid medical bills or the customer who yelled at me at work, and not about what I was (or wasn't) doing in the moment I offended you.  We all need to be careful not to personalize situations that in all probability have absolutely nothing to do with us.  We see circumstances constantly from our own perspectives.  Even when we attempt to put ourselves in the other person's shoes (that's called empathy, people, and it's really a good idea), our perceptions are still blurred by our own reality.  So even when we attempted to step into those shoes, we still carry the dust from our own highways.

Being offended (or being offended that someone is offended) supplies no fair proof of right or wrong, so the sense of moral superiority is just a mirage.  The feeling of being slighted is nothing more than a barometer of our own emotional control.  We are definitely the victims when we find ourselves offended.  But we are being victimized not by the offending individual, but by ourselves.  It may feel like the offense originates from the other person, but ultimately we are the ones who allow ourselves to feel offended.  The very wise Eleanor Roosevelt had it right when she said, "No one can make you feel inferior without your consent."   Boil it down to slow gravy and we can choose to be offended...or not.

So I'm seeking to create a more balanced and stable sense of self.  I want to be less affected by my own negative thoughts and more content within myself.  If it doesn't matter what other people think of me, being offended isn't an option.  Other people's opinions of me just won't matter.  I do not need their affirmations to validate who I already know that I am.

And if I find myself teetering precariously on the verge of being offended...well, I should probably go ahead and give the other person the benefit of the doubt.  Because they probably didn't mean it (unless they were just being a dick, then they aren't worth the energy it takes to be offended anyway).  And I have way better things to do with my time...like being the totally awesome person that I know I am.