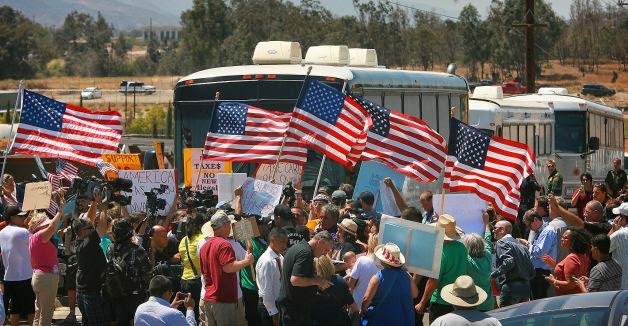 Remember back in high school?  I know it will a bit of a stretch for you old fogies like me, but try.  Think back to your freshman year.  Remember how you were treated by the upperclassmen?  If your high school was anything like mine (or most high schools across the country), back before bullying was considered a bad word and a mortal sin, freshmen were considered stupid.  They were looked down on with disdain.  They suffered persecution in the form of pranks and hazing and blatant verbal abuse.  It royally sucked being a freshman.  We were treated as if we were trespassing on someone else's turf, as if we didn't belong.  All we could do was suffer through it.  We silently cursed it, but tolerated our fate until we came out on the other side.  And then we were seniors!  And those new freshmen seemed so stupid.  And we looked down on them with disdain.  We felt like they were trespassing on our inherited turf, like they didn't really belong there.  And the cycle continued.

Sometimes, when I look around at my fellow citizens, I realize that none of us has really grown up.

I've been watching some of the political protests over the "illegal immigrant"/"refugee" children flooding over our borders.  I'll admit it is a confusing and multifaceted issue.  But I remember when "illegal immigrant"/"refugee" children were captured at gunpoint by swat teams and shipped back to their parents, á la Elian Gonzales.  So the handling of these thousands of unaccompanied children by our government is confusing (and even a little suspicious to my inner conspiracy theorist).
All across the country, protesters are carrying rifles and demanding that the borders be sealed.  Most of them seem to want the children turned away. They don't care whether these children are fleeing poverty and violence in their home countries or not. (Poverty and violence that has been fueled by our own star-spangled U.S. government, I might add.)  These new juvenile arrivals are seen as trespassers, nuisances, and health risks, even if they might be "huddled masses yearning to breathe free".

But it's hard for me to see these protests as anything more than the most recent symptom of American arrogance and pride, a manifestation of Joe Citizen's scorn for Hispanic immigrants (whether legal or illegal).  Good ol' Joe routinely rants about how generic "Mexicans" (Because they all look alike) steal our jobs (which is utter bullshit.  The average American does not want to work the long hours and backbreaking field and construction work many of these Hispanic immigrants are employed to do), and use our schools and health care services, and drain our social resources (like food stamps and welfare), and don't speak our language or respect our customs or pay income taxes (Damn it!  This is 'Murica!).  Forget that these so-called people came here looking for a better life for themselves and their children.  They don't belong here.  They are trespassing and they should just go HOME!

While I do think it would be a fabulous idea to better seal our borders for safety and security reasons, I don't share in the apparent general disapproval of Hispanic immigrants.  They are just the newest wave of foreigners that find themselves unwanted by the previous wave of unwanted foreigners.

It's long-standing tradition we Americans have - the vilification of newcomers.  It stretches back to the first European settlers who were seen as intruders by the so-called "natives" (who were really just immigrants who poured over an unsecured Bering Strait during the last Ice Age... without papers).

It continued with Benjamin Franklin's grumbling about the "stupid, swarthy Germans" that came "in droves" to settle in Pennsylvania before the American Revolution.  He swore they would "never adopt our language or customs".

In the 1850's, it was the Chinese immigrants, first coming to work in American gold mines (and then building the fast growing stretches of the railway system) that became the freshmen of American culture.  They were accused of stealing jobs and polluting the gene pool.  They couldn't own land or file mining claims.

While disgust with Chinese immigrants flourished in the western United States, Irish immigrants were the target du jour in the east.  Fleeing the potato famine, religious persecution, and political upheaval, 3.5 million Irish immigrants flocked to the shores of the Untied States seeking the promise of a better life.  But in America they found more of the same conditions, and it was often difficult to find employment when people wouldn't hire Irish.

Next it was Puerto Ricans.  Even though the Merchant Marine Act of 1920 officially made Puerto Ricans American citizens, when large numbers moved to mainland America to find better economic opportunities, they met with resistance from the newest class of seniors (Many of which probably had Irish grandparents).  Don't believe me?  Just watch West Side Story.

You'd think we would have learned by now. But then again, all of those generations of high school students haven't.  So the current generation will look down our collective noses and throw our little temper tantrums over immigrants from Central America.  And then those same immigrants will grow up and be assimilated into the hive just to grumble and protest and discriminate against the next wave of outsiders, the "homeless tempest-tost" flocking like moths to America's "beacon hand" who only find it's a lamp that burns with annoyance and disgust.

But if they suffer through it... their time will come.  And it will all start over again... but with a brand new antagonist.  Because the newest immigrants are always hated and despised.  It's an American tradition.
Posted by Alice Jones Webb at 12:34 PM

Have we ever thought of starting a New American Tradition and quit living in the past and give compassion a chance.