That Comet is Way Bigger Than Kim Kardashian's Butt

Sometimes humans amaze me with their shallow stupidity.

This week some really smart, really innovative, really adventurous Europeans, using their amazing mathematical superpowers along with some rockets and harpoons, landed a robot probe on a comet.  The landing was a little awkward. (But these are some seriously geeky nerd-types. Awkward should be kind of expected, right?) The probe missed it's mark and had a bit of a bouncy landing, but considering this endeavor involved landing an extremely expensive and relatively fragile piece of equipment on a speeding ball of ice over 300,000,000 (That's a lot of zeroes. Read that three HUNDRED MILLION!) miles away, hurtling through space at over 40,000 miles per hour (Also a lot of zeroes), after a ten year journey... it almost leaves me speechless.

Keep in mind that my genuine sense of awe is coming from a person who can't figure out how to run the coffee maker and the microwave simultaneously without tripping the breaker. But this is still pretty freaking amazing, awesome in the true sense of the word (which actually means "inspiring awe or an overwhelming feeling of reverence"... not it's overused pop culture definition of "cool" or "great" which instead winds up just meaning super lame). This is anything but lame. This is an historic event. It is unbelievable and incredible and astonishing. It's really so great that it's left me at a loss of adjectives to describe it.

And yet what is everyone talking about?

No... not her husband... her actual derriere. It appeared in all of it's Photoshopped glory on Paper magazine's cover.

Really? Are you freaking kidding me? How can we be so fascinated by a blatant publicity stunt by an untalented over-rated reality TV star? Definitely a publicity stunt since I had never even heard of Paper magazine before it was graced with Kim's bottom. 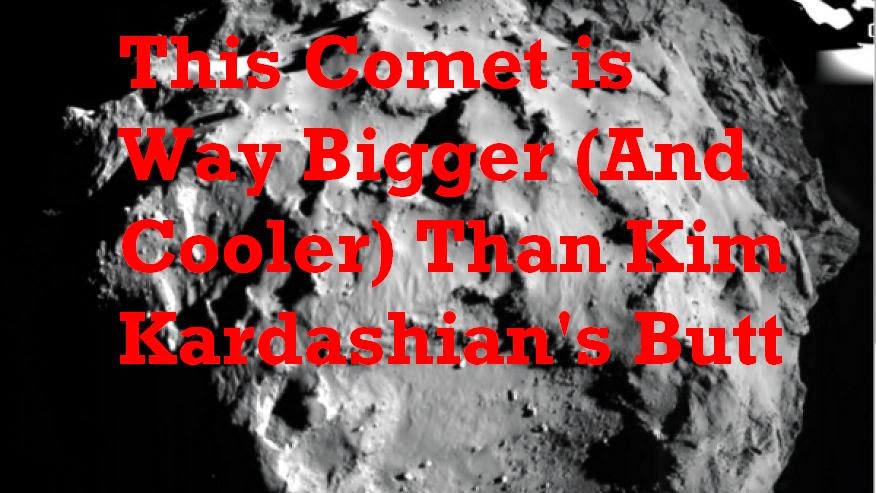 Come on, people. I mean, sure it's shiny... but are we really so dull and bored  and shallow, that every shiny thing the media tosses at us distracts us from the amazingly important things that are happening in the world? We shouldn't be so easily amused by the banal and petty that we miss out on the truly incredible and uniquely beautiful things in the universe.

Kim Kardashian's glistening butt, while admittedly large, is nothing compared to the icy 67P/Churyumov-Gerasimenko. (That's the comet that the probe Philae reached. I will refrain from jokes concerning probes and Kardashian backsides because that would be inappropriate.) There are other ample Kardashian bottoms out there to see.. we still have Kourtney and Khloe, after all. Besides it's just a butt. Everyone has one. But in our lifetimes we will never have another chance to see the surface of a comet. It's a freakin' COMET! That's so much cooler (quite literally) than anyone's butt!

Maybe we are just a bunch of 8 year-olds, immature and needing shiny things for our amusement, preoccupied with butts and bathroom humor.

Sad really. But at least I got a few good butt jokes out of it...