Don't March for Me, Marge and Tina.

(If you sang that title to a tune from Evita, we should be friends.)

I knew I was going to upset a lot of people when I posted that "I Have a Uterus and My Rights are Just Fine." It's why my finger hovered nervously over the mouse before I finally clicked the post button and sent it out for all the world to see. 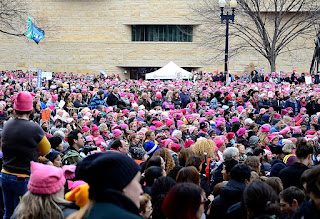 I understand that passions are running high. People don't just march on Washington in droves unless they really, REALLY feel strongly about something. I knew there would be some panties in wads. And I was right. The hate mail and personal attacks have come flying in. But in the spirit of open discourse (Sorry to all of the people who unfriended, unfollowed, or unsubscribed. You didn't give me the chance to prove points or explain. I suppose it's easier to ignore dissenting opinions than to ponder them.), I thought I would clarify just a few points.

First: I never said I was ungrateful to the women who marched for my right to vote. In fact, I am incredibly and eternally grateful for the protests and arrests and hunger strikes. So grateful that I regularly exercise that hard-won right, probably far more frequently than the average apathetic American. So, please don't assume I need a history lesson.

Second: Don't shut down my opinion because of my perceived "privilege." I know that I am just a "college-educated, middle-class, white woman," but I am still entitled to form opinions, even when they disagree with yours. Also, you shouldn't assume my background, because you are probably wrong. I grew up in poverty, with no electricity or hot water, and I've experienced poverty as an adult, too. As a child, I watched my father punch holes in the drywall inches from my mother's face. As a teenager, I lived in a neighborhood that was infested with crime and drugs and gang violence. And I've worked at a job where it was "okay" for rich men to grab my butt and ask me if I was on the dessert menu. How's that for "privilege?"

But isn't that how we shut down dissenting opinions, now? By pointing out the other person's "privilege?" Oh, that's right ... I'm just a woman. I'm not supposed to have an independent thought. I'm not allowed to think for myself...unless that thinking for myself brings me to the proper conclusions.

Third: While so many of you have promised to "march for me anyway," ...Don't.

Because we apparently have very different ideas about what basic rights are.

The Women's March and its collective demands for equality and women's rights left me scratching my head wondering "What more rights do we need?" Because, in the United States, women have the right to vote, hold public office, pursue higher education, and own property. We can marry or divorce, have children or not. We have access to birth control (although perhaps too freely and without acknowledging the dangers and risks of long-time use) and other forms of reproductive care. There are laws against sexual assault and female genital mutilation.

But you answered the question. You marched for free birth control and easy unregulated abortions and mandatory maternity leave. You marched for single mothers living in poverty and for government health care.

I know this still makes me the enemy, but I don't think the government needs to swoop in and solve all of our First World problems. In fact, the more power we give "them," even in areas we think are good and noble and beneficial, the less power we have for ourselves. That's how we become victims.

It surprises me that so many people fear a Donald Trump brand of fascism, a form of government power run amok, and yet we just saw hundreds of thousands of women march down the streets of our nation's capitol asking government to do something (whatever form they expect that "something" to take)...No, demanding that government do something. Government control is government control... even when it takes a form you agree with. And once you hand over control to government, it is nearly impossible to get it back.

And fourth: Just because I don't think government intervention is the solution, doesn't mean I don't feel empathy for those women who are struggling.

I do realize that this country isn't quite where it needs to be, that sexism is alive and well, and that women aren't always treated with the respect they deserve. I realize the scarring effects of sexual assault. But all of the legislating and politicking in the world won't solve those problems... because they aren't political problems... they are cultural problems.

So in that sense, I'm glad that the women who marched felt feelings of love and unity and solidarity. There is far too little of that in the world. And I admire that so many people joined voices and demanded to be heard. However, that doesn't mean I need to think like them. I don't agree with all of their platforms (for many reasons) or demands or concepts of fundamental rights.

So Ladies, go ahead and march for yourselves.

Don't march for me.

So, you feel empathy for all those who are struggling, but those of us who marched for them should be ashamed of ourselves for throwing a temper tantrum in our silly pink hats. Sorry, but there is a disconnect here. I'm not buying it.

You may know poverty and non-privilege, but you have certainly forgotten.

Thank you for speaking truth in both the other day's post and today's. I'm with you.