Is DeVos Really The Greatest Danger to School Children?

According to my social media newsfeeds, we have something new to be upset about. I know that it's been difficult to focus. The atrocities keep popping up like so many kernels of microwave popcorn, the public ire and fear busting the internet wide open with each new Trumptopian development.

Betsy DeVos - businesswoman, billionaire, political campaign contributor, and grizzly-phobe - is the new United States Secretary of Education.  She is, of course, the bogeyman, striking fear in the hearts of teachers and parents across the country.

She lacks classroom experience, school administration training, or really any background in education. She has never taught in a public school, nor attended one, nor sent her children to one. It also seems unlikely that she has ever spoken to anyone who has. She has no relevant credentials or experience that would have prepared her for a position directing and controlling the almost 70 billion dollars in education funds this country doles out to public schools each year, not to mention the lives of more than 50 million public school students. 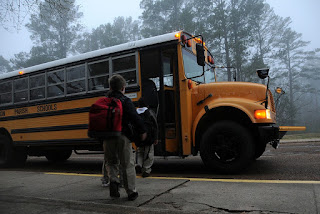 I can understand the desperation of parents and teachers. That's a lot of power and influence and responsibility for one unqualified, underprepared woman to wield. There is a real and tangible and founded fear that having DeVos in charge of the nation's public schools could inflict severe harm on our young people. The Department of Education with DeVos at its helm is obviously an agent of destruction.

But what a lot of people don't understand, or have conveniently forgotten, is that the Department of Education has long been an agent of destruction, that the country's public education system has a history of harming our young people through systematic failure.

Just in case you need some reminding:

If it isn't glaringly apparent that the entire U.S. system of public education is failing and failing hard, you're lacking some major critical thinking skills... which we can likely blame on your public school education.

The system is already failing our children, and it didn't need Betsy DeVos or Donald Trump to do it.

Let's be honest, what's the worst thing that an incompetent, grossly inexperienced billionaire could cause?

Only the complete and total collapse of the Department of Education.

Yeah... that's the "worst" thing that could happen.

Or is it really the best thing?

It's pretty hard to argue that!

She is not a threat to public school kids. In fact, if she and Mr. Trump have a closet plan to have her come in and use his first term to dismantle the agency, that would improve the lot of kids in public schools everywhere. However, I can't see the hoped-for secret plan. And what I do see is a strong attempt to ensnare private schools and homeschools into the federal education payola scheme - via "extending" vouchers to us. We might as well lock the chains around our arms and legs and necks now! Maybe I'm wrong and they'll reveal the secret plan tomorrow by putting rummage sale tags on all the DOE's furniture. But unless that happens it appears very likely that the independence and academic freedom of private schools and homeschools truly IS in danger.

You built up to the punchline so expertly. "But what a lot of people don't understand, or have conveniently forgotten, is that the Department of Education has long been an agent of destruction..." I laughed so hard my kids all came running to see what was so funny. Thanks for another witty post.