The Real Enemy of Free Speech

Translation: "I am Charlie."

Before last week, I'd never even heard of Charlie Hebdo. But on Wednesday, the French satire magazine was thrust into the international spotlight after self-righteous Islamic extremists stormed the magazine's Paris office with Ak-47s and shouts of "Alahu akbar!"

Since the Paris magazine bloodbath, everyone has been talking about Charlie Hebdo. The magazine specialized in offensive, in-your-face, generally obnoxious satire. It routinely tap-danced all over the fine lines of intellectual criticism and banal vulgarity. Boundaries of taste and tolerance were frequently pushed by the publication. The pushing of those boundaries often created somewhat disturbing material that slapped political correctness squarely across it's rather smug face.

While the massacre left the world talking about terrorism and Islamic extremism, it also brought up the subjects of free speech and journalism, arguably the cornerstones of free Western society.

Being a writer myself (and one who has been known to be occasionally interpreted as "offensive"), the right to speak (or write and publish) controversial material is sacrosanct. So when I started hearing major criticisms of the magazine, by friends and coworkers and even journalists, I was surprised and more than slightly appalled.

"They shouldn't have done that."

"Offending people isn't right. They were just being mean."

"I do think it's understandable."

"They basically asked for an early grave."

"They were just being racist assholes, that isn't freedom of speech. You can't just say whatever you want to say."

Actually... you kinda can.

Freedom of speech extends to the unpopular, the minority view, and yes... to offensive racist, homophobic, sexist and other forms of the politically incorrect.

We don't need protections of free speech to talk about the weather or what's for dinner or other mundane bull crap that isn't really worth talking about. It's not for discussions of popular thought or conversations that are easy and unchallenging and leave everyone feeling safe and cozy within the confines of their comfort zones.

The beauty of freedom of speech (and freedom of the press as well) is that it extends to the controversial. The provocative. The unconventional. The audacious. And yes, sometimes the obscene.

Perhaps we should assume for a moment that the journalists and cartoonists at Charlie Hebdo weren't just being assholes.

The bloody attack on Charlie Hebdo probably came as less of a surprise for them than it was to the rest of us. The magazine had been running depictions of questionable taste for years. It had come under harsh criticism and even physical attack numerous times in the past. In 2011, the magazine's headquarters were firebombed after running edgy cartoon depictions of the Muslim prophet, Muhammad (including a drawing of him with a clown nose).

Death threats were nothing new to the employees of Charlie Hebdo.

That the journalists at Charlie Hebdo were risking death to publish what appears to be childishly goading cartoons should prove the seriousness of their cause. Few people risk life and limb to simply be funny. There was a matter of principle here, that whether you agree with their views or not, you certainly should respect their desire to be heard. Plenty of people with more important and substantial things to say have cowered under the fear of lawsuits, lost income, humiliation, and damage to their public image... with personal harm never even registering on the radar.

How many of us are comfortable saying what we feel the need to say when there is nothing substantial on the line? How many of us start to stumble and retract the moment the stakes get higher? Few of us have the hutzpah to press on once the pressing gets uncomfortable. (And if we are so quick to back down and make concessions, then how much of what we have to say is based on real and authentic principle?)  There are few of us willing to face death for something we thought worth saying.

Grandmothers the world over drone on saying, "If you don't have anything nice to say, don't say anything at all."

Sometimes when there is nothing nice to say, those un-nice things are the very ones that need to be said.

That satirical cartoons, like the ones so often featured in Charlie Hebdo, create such visceral responses proves their effectiveness. Nothing grabs people's attention as quickly or as earnestly as the offensive. Satire is about exaggeration. And seeing cultural or religious ideas in extreme exaggeration hammers criticism home in a way no calm intellectual discourse can. It is a harsh shake to wake us up and elicit a response... any response. Just show us that you are paying attention.

So maybe the cartoonists and journalists at Charlie Hebdo were being assholes, but they were assholes with a purpose.

There is a far worse evil than hurting someone's feelings. It is leaving the truth unsaid. It is remaining silent when something important and worth saying bubbles inside you. It is remaining mute when you feel the need to speak out.

To even imply that the artists and writers at Charlie Hebdo deserved to die is obscene. Since when is murder less a crime than offending people?

When did being accused of racism or homophobia or insensitivity become the most heinous crime of all?

The real enemies of free speech aren't Islamist extremists or terrorists or overly zealous politicians. The pressure of being politically correct and the fear of accidentally offending keep more things from being said than any law. Political correctness (and the mindless way the masses cling to it) is the enemy of free speech.

Thank you, journalists of Charlie Hebdo. Thank you for reminding me that there is a very real enemy out there, an enemy willing to bash down doors and steal my right to say what I think is worth saying.

That enemy isn't wearing a turban or brandishing an assault weapon. That enemy is fear. It is fear that keeps people silent. It is fear that so often keeps the things worth saying from being said. It is fear of public opinion and loss of popularity, fear of humiliation or intellectual bullying, fear of offending someone (even when that someone might be worth offending), and sometimes fear of actual harm (whether emotional or financial or physical).

Thank you Charlie Hebdo for not being afraid.

Thank you for saying what you felt needed to be said, even when it wasn't popular. 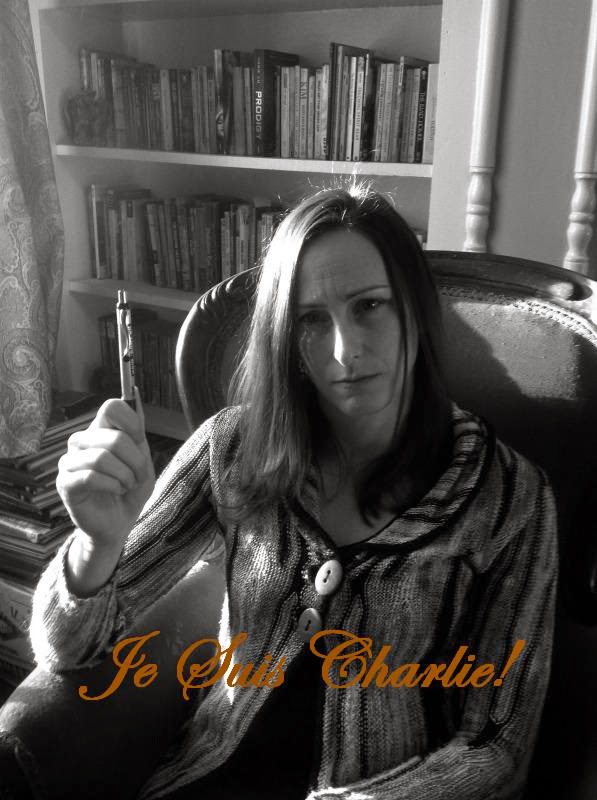 That may seem flippant at first, but tying the two together underscores the question of whether the most effective way to deal with oppression,racism, classism and freedom of speech is with open,frank conversation or if sweeping stereotypes,opression and hatespeech under the rug will work.

It's hard to say.

Interesting point, Eric. Although, there is a difference between being irritated and annoyed by loudly expressed opinions and believing that people who shout irritating and annoying opinions deserve to be silenced by whatever means necessary.