Are We Living In A Dystopian Novel?

I'm an expert when it comes to dystopian fiction. Sure I read 1984 and Animal Farm way back in high school, but having a teenage bookworm for a daughter has helped me achieve my level of expertise better than any forced reading from even the most well-meaning high school English teacher.

In the past several years, my sweet daughter has tossed book after book my way saying, "You really need to read this one, Mom." Considering all of the years I told her the same thing as I tried to coax a love of reading in her heart, how could I possibly say no? Currently she is forcing me to read The One Safe Place, by Tania Unsworth (although I admit that there was very little arm twisting necessary). I have to admit that so far, it's an intriguing read.

Her recommendations have led me to not only popular dystopian series like The Hunger Games and Divergent but also to some fabulous yet less popular series like Marie Lu's Legend, Allie Condie's Matched, and Lauren Oliver's Delirium (which is secretly my favorite). I've also read the somewhat less impressive Maze Runner, Unwind, Gone, and Birthmarked (just to name a few). Plus I've read Lois Lowry's The Giver.

So I've obviously had some extensive experience with dystopian teen fiction. (I should probably get a certificate or something. That'd be cool. It might look good hanging over my desk.) 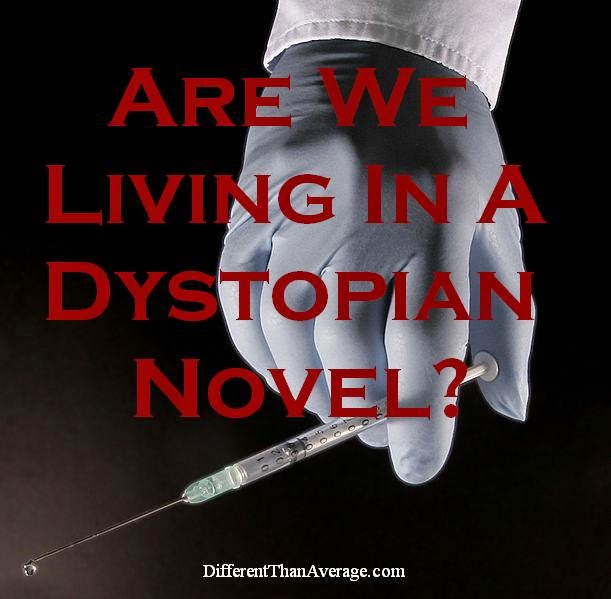 I admit to often wondering to myself, "How did these fictional societies wind up so whacked out?" You know they didn't just wake up one day and say, "You know what would be super cool? Throwing a bunch of teenagers in an arena and making a kick-ass reality show out of how they murder each other."

Probably didn't happen that way. The normal everyday people like you and me would freak the heck out.

Doesn't anyone wonder about the back story?

You see, there had to be little baby steps along the way, little micro decisions that cracked open doors and allowed the gross abuses of power and violations of freedom to sneak up in small ways, day by day, so that nobody was really paying attention.  By the time they were forcing kids to choose a faction, it was too late.

It's like boiling a frog. If you toss a frog in a pot of boiling water, he leaps out. He may be a little blistered, but he doesn't just sit in that pot and allow himself to be cooked into a stew. But if you place that same frog in a pot of room temperature water, and just slowly turn up the heat, that frog doesn't notice. He sits right there swimming around in happy La La Land until it's too late. Then the powers that be can just add in a dash of salt, some peppercorns, and a bay leaf. Voilà, frog soup!

This past week has left me feeling like I'm living the back story to some insane teen dystopian fiction... only it's taking place in my home state of North Carolina.

The bill would eliminate North Carolina's current religious exemptions for vaccination... not just for public school children, but for all children enrolled in schools in the state. Since current state law recognizes registration and student enrollment in each individual home school, private school, charter school, and public school in the state... and since school attendance is required for all North Carolina children between the ages of seven and sixteen... ALL children in the state (under the current wording of the bill) regardless of where they receive their education, would have to receive a long list of vaccines. Period. Personal religious beliefs be damned.

Interesting fact: religious freedom is protected in both the United States Constitution AND the North Carolina Constitution:


"All persons have a natural and inalienable right to worship Almighty God according to the dictates of their own consciences, and no human authority shall, in any case whatever, control or interfere with the rights of conscience." ~ North Carolina Constitution

Senator Tarte's bill would seriously interfere with a lot of parents' consciences.

I know that even maybe-kinda-sorta empathizing with the "anti-vax" community brings out the internet mobs with their cyber torches and pitchforks. And because of those internet lynch mobs, I've hesitated to write about this bill, but let's consider the ramifications of removing an individual's right to bodily integrity (because that is what is happening here). If the government can force you (or your child) to be injected with a substance, any substance, even if it is considered "for your own good", against your will... that, my friends is pretty freaking frightening. What else can they force upon you? Microchipping? Euthanasia for the sick or dying? What if they do it in the name of what is best for "society"? Do the rights of the individuals that make up "society" still matter? Who gets to decide what is best for "society"?

If we do not have the right to determine for ourselves (and for our children) what happens to our bodies, the most basic foundation of ourselves, then we have no freedom at all. Forced vaccination, no matter how you feel about herd immunity or individuals with radical religious beliefs, is the sort of stuff that dystopian literature is made of.

But NCSB 346 doesn't stop there. No, it also will require genetic testing for all North Carolina school children. It sounds great to test every child for genetic deficiencies before injecting them with potentially deadly substances (because vaccination combined with a genetic disorder like severe combined immunodeficiency could be deadly), but the government maintaining a DNA database brings up memories of nightmarish government eugenics programs. Is this the first step in boiling the frog? I don't think I want to find out.

Another disturbing feature of NCSB 346 is the complete and total handover of vaccination decisions to the federal government. If this bill passes, all North Carolina children without a difficult-to-obtain medical exemption, would be required to receive all of the vaccines on the schedule determined by the U.S. Department of Health and the CDC. There will be no individualized care. No collaboration between a child's doctor and the child's parents to determine what is best for the child (perhaps because what is best for the child is irrelevant. What is best for society is the real priority here.).  There is no room to delay individual vaccines or to deny them for any reason.

Every child will even be required to be vaccinated annually for the flu... because... well, the US government says so. Personally I think my health care, and the health care of my children should be between me and my doctor... no government intervention required.

But it sounds like Big Brother is gaining power.

Or maybe I just need a tinfoil hat?

It's okay, people. Just go ahead back to your funny cat videos and celebrity "news" stories. Pay no attention to the men behind the curtain. This doesn't really affect you anyway. You aren't Amish. You vaccinate your kids, right?

How's the water in there?

"First they came for the Socialists, and I did not speak out—
Because I was not a Socialist.


"Then they came for the Jews, and I did not speak out—
Because I was not a Jew.


"Then they came for me—and there was no one left to speak for me."

Martin Niemöller was a prominent Protestant minister who emerged as an adamant and outspoken critic of Adolf Hitler, specifically of the Nazi government's control of churches. He spent the last seven years of Nazi rule in Sachsenhausen and Dachau concentration camps. He narrowly escaped execution. After the war, he expressed his deep remorse for not having done enough to help the victims of the Nazi state.

Even the citizens of Nazi Germany didn't see it coming, in spite of their lack of internet cat videos to keep them distracted.

I'm telling you, as an avid and experienced reader of dystopian literature... this road we're on, it's not looking good.

All bad endings start somewhere.
Posted by ajoneswebb at 5:27 PM