A Letter To Baltimore's Mom Of The Year

Dear Mom of the Year,

I saw the video of you confronting your son on the streets of Baltimore. I saw your fury and exasperation as you beat him about the head, holding him with one hand while you slapped him across the ear and temple. I heard the profanity-laced lecture you delivered as you chased him down. I heard you call him stupid and a whole list of other insults.

You caught him throwing rocks at Baltimore police. You didn't want him "to be another Freddie Gray", referring to the young black man who's spine was severed after a confrontation with law enforcement. For that I say, "Good on you."

I understand the Mama Bear, gut-wrenching desire to protect your kid from harm. I understand those anxious, bubbling, do-whatever-it-takes feelings. And I understand the sheer anger and frustration a mom experiences when their teen children make stupid decisions. 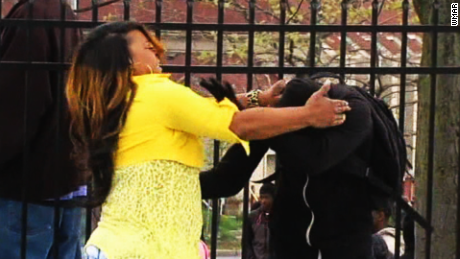 I won't claim to completely understand where you are coming from, because my children have never participated in a riot, or thrown rocks at police, or worn masks and hoodies during civil unrest in downtown Baltimore. (Believe me, I'm counting my blessings.) Chances are I would physically drag my teen sons away from danger by the ears if I had to, even though they outweigh me by quite a bit.

I'm not anti-spanking. My kids have received a few in their lives. They've done stupid things. Children frustratingly do stupid things (if I were better at science I could spout the reasons, although I understand it has something to do with developing brains and impulse control, yada, yada, yada). I've fought the urge to beat them about the head with nearby blunt objects. Although, I admit that by comparison to yours, my frustrations are relatively absurd.

So, were I in your shoes (and they are quite fashionable shoes, by the way), I might have been desperate enough in the heat of the moment to do exactly what you did.

So maybe this isn't a letter to you at all. Maybe this is a letter for all of those who've laid down accolades like roses at your feet, to the people who are singing your praises like a Hallelujah choir. To people who claim you are the quintessential parent, who have placed you up on a pedestal to stand as an example of what parenting should look like. To the people who've posted and reposted your video so many times it's gone viral, claiming you deserve to be "Mom of the Year". To the people who even laughed at the video like it was a Comedy Central special. Poor kid got completely pummeled by his Mama.

You see people, this isn't funny. It's not funny at all. It's incredibly sad. It's sad that this mother finds herself in this situation, afraid for her son's life. So afraid that he might end up in jail or dead that she not only embarrasses him on the streets and all across every news channel on television, but she physically assaults him.

Why is it praiseworthy for a mother to physically assault her child, even in attempts to protect him?

In no other relationship would this be okay. It would be seen as abusive, not entertaining, and chances are good that the attacker would be hauled away in handcuffs.

I hear people claiming if more mothers beat their children, we wouldn't have the kind of crazy violence that's currently running rampant in Baltimore. But do you really think that was the first time that mother hit her child? Considering her level of ire and her pin-point slapping accuracy, I seriously doubt it. And yet, there he was, masked and hooded and pitching stones at police officers. Physical punishment didn't keep him from making stupid decisions or committing acts of violence.

Don't you see the irony? She didn't want him committing acts of violence, so she violently attacked him. Oh yeah, that should drive home the lesson.

Self-respect is taught through years of treating the child with respect, even when we're angry or embarrassed or disappointed. It comes from modeling respect for ourselves and others. It comes from holding a positive mirror up for our children so that they can see a positive reflection of what they are.

But when a mother grabbing her child around the neck while delivering blows to the head and screaming profanity becomes a positive symbol of parenting success and not a symbol of desperation, there is something seriously wrong with our society's attitudes about parenting.

So, dear desperate Toya Graham, Baltimore's Mother of the Year, I'm sorry. I am sorry that you found yourself in that situation. One mother to another, I am heart-wrenchingly sorry. You receive no criticism from me. Only aching empathy.

But to the people who have stood up in droves to applaud her, who have made her a parenting role model, who have promoted her despairing act of violence against her son as the cure to society's ills... Shame on you. You don't even understand the problem.

And haven't we seen enough of that?

I applaud this mother. I asked my girls what would happen if i had caught them like this and they said I'd probably do worse. Very disrespectful child. You can tell he knew better cause he knew he was in trouble. She had taught him better than that. Kids need discipline. They need to know what is acceptable and what is not. Every child is different. Some, however do need drastic measures. I applaud you Mom. I bet he'll never forget it.