What Happened To Playtime? - Pedal Bikes Make Kindergarten More Like a Sweatshop

If you picture the ideal kindergarten classroom, what images come to mind? Circle time, with all the kids sitting criss-cross applesauce on the floor? Dress up areas and art centers and sensory tables? Free play outside where kids are swinging and jumping rope and playing tag?

We can't have 4 and 5 year-olds wasting precious instruction time with all of that non-testable bullcrap. It's never too early to start focusing on "instructional rigor" and "college readiness". That's why Kentucky elementary school teacher, Faith Harrelson, asked Owensboro Public Schools for "pedal desks" in her classroom. They look kinda like normal desks, but with hidden bicycle pedals underneath, so energetic kids can pedal while they diligently work math problems. 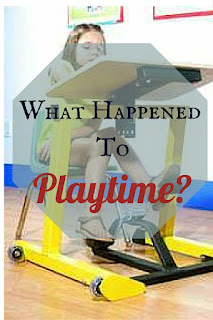 Kindergartners are notoriously fidgety with short attention spans. Their little growing bodies crave movement. It's hard to get even the most focused ones to sit still and pay attention for more than 5 seconds without getting up and running around the room. Kindergarten teachers have a hard time forcing their young charges to sit and "learn" and do "seatwork". (Which is incredibly important because the clock is ticking and college is just around the corner!)

Public school already resembles a glorified sweatshop for children these days, with kids and teachers busting their backsides for performance-based funding. Standardized tests are the measure for performance and effectiveness. Every waking moment must be spent in preparation for THE TEST. It leaves very little time for developmentally appropriate activities or self-directed learning.

Small children were not meant to spend their days trapped behind desks (whether those desks have pedals or not), being passively instructed, made to sit still and take tests. They need to be free to move, to organize their own games, to be outdoors.

They need to PLAY.

4 and 5 year-olds are smack dab in the middle of a wondrous opportunity for brain development, and researchers are finding more and more that time on the playground may be more important than time in the classroom. Sergio Pellis, a researcher at University of Lethbridge in Alberta, Canada states, "The experience of play changes the connections of the neurons at the front end of your brain, and without play experience, those neurons aren't changed." In other words, without play, children aren't getting fully developed brains.

The changes that childhood play has on the brain help wire it's executive control center, which plays a major role in planning, problem-solving, and regulating emotions. According to Pellis, play makes the young brain ready for life, love... and even schoolwork.

While Karen Harrelson claims her classroom's new pedal desks allow more student movement, which "activates cells in the brain" and cause a "shift in student engagement", maybe adding some free play to the children's schedules would have been more beneficial... perhaps even having a positive effect on those highly important and coveted test scores. It certainly would have been a lot cheaper.

But maybe if we just hook those bike desks up to the power grid it could help offset their  $12,000 price tag...

Not to mention make the classroom look more like the child labor factories they've become.
Posted by ajoneswebb at 10:19 AM