Are We Dancing on the Grave of Freedom? 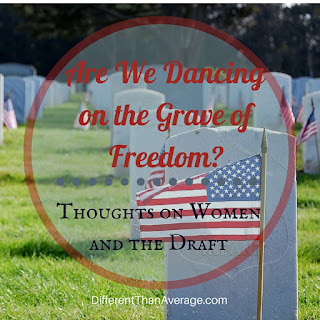 Just over two years ago, I walked with my oldest son to the local post office just a few blocks from our home. He could have registered for Selective Service online, but there is something about that solemn walk to the post office, the coming-of-age ritual that young men have participated in since 1940, that just seemed fitting. It was an act that somehow tied him to his father and grandfathers and great-grandfathers who had also made similar walks to similar post offices not long after their own eighteenth birthdays.

As a mother, the act was slightly disturbing. My kid, who barely needed to shave, was registering with the government, surrendering to its will, suddenly subject to its whims. He could be forced to kill and be killed just because he was male and a citizen and between the ages of 18 and 26. Go, America! Let freedom ring!

I am not so far removed from the Vietnam War and it's era of burning draft cards. I've heard stories from my parents about their friends who were drafted to "serve" in the War and then never came home. There is something about the idea, the possibility of your own child that you've nurtured and protected and invested an awful lot of energy in keeping alive, being forced by the powers that be to serve as a pawn in international affairs and government interests.

My daughter turns eighteen in January. Just a little over six months away.

Last week, the U.S. Senate overwhelmingly passed The National Defense Authorisation Act which includes an amendment that would require women to register for the draft.

I may soon be making that same walk to the post office with my young daughter.

It's only fair, right? With the pentagon recently dropping barriers to women serving in combat roles, it seems a requirement for women to register for the draft is the next, logical step to fairness and equality. That the bill passed so strongly with an 85-13 vote proves just how readily our lawmakers are willing to force the nation's girls into conscription.

In the name of fairness.

Women have, after all fought tooth and nail for years to be treated like men. Our sisters struggled for centuries to serve as anything more than just nurses in our armed forces. And they've won. Even combat jobs are now open to females. There are women who actually don an Army Ranger tab on their uniforms. Inclusion in the draft is the next logical step in achieving gender equality, and one whose time has long since come.

There is nothing that Americans care about more than equality.

We certainly don't care so much about freedom, or we wouldn't be so quick and eager to throw it out in the name of equality.

Because Selective Service is kind of like a compulsory lottery for slavery (and perhaps imminent death). If not slavery, what label do you slap on a system that indentures individuals, tells them where they can go, what they can do, even what they can do to their bodies? They must do what they are told without hesitation and without regard to the whisperings of their conscience. Slavery is defined as involuntary servitude. And that is exactly what conscription is, involuntary service.  I concede that the meager paychecks our military servicemen and women receive does offer a significant perk over traditional slavery. But toss in the potential order to kill other human beings, or to have their life sacrificed for ideals the individual may not hold, and I think it almost evens out.

Remember how angry we all got over The Hunger Games? Remember how we couldn't believe that those parents would stand by and watch their children be sent off by an uncaring government to die? Remember how they didn't even do anything about it?

For generations now we have knowingly allowed our sons to be registered and catalogued for possible sacrifice. We've even counted it as noble. We've handed over our sons' lives to the whims of an imperial government. And now we are lining up to hand over our daughters, too. All to the sound of thunderous applause. All to the celebratory chants of "Equality".

All because it is what's fair and right.

But it isn't fair or right. It isn't for our sons and it isn't any more for our daughters.

Instead of marching down the road to equality, and willingly placing our daughters' lives in possible jeopardy because it's what our men have to do, maybe we should just rethink the whole concept. Maybe Selective Service was never right in the first place. Maybe we are asking  the wrong questions. Maybe, for once, our country's men should be standing up and demanding the same freedoms that our women enjoy.

Or I could be wrong. Maybe equality is far more important than personal freedom. Maybe we've taken that "all men are created equal" phrase in the Declaration of Independence a little too literally. I'm not sure why those five words should seem more important than the words that follow, "that they are endowed by their Creator with certain inalienable rights, that among these are Life, Liberty, and the Pursuit of Happiness".

It seems some people think equality trumps their inalienable rights. Or maybe they are just willing to trade those rights for equality.

I'm not. And neither are my daughters.

Posted by ajoneswebb at 3:55 PM