2017 Can Hear You. Everybody Act Natural.

2016 is almost over, and there are tons of people celebrating it's departure. I suppose for most it's been a crappy year. 2016 is taking Carrie Fisher and Prince with it, while leaving behind a president-elect who largely resembles a sociopathic orangutan.(no offense to orangutans...or sociopaths, for that matter.) It shouldn't be surprising that there is a prominent attitude of "let's just go ahead and get this thing over with already."

I've seen the tweets and status updates broadcasting plans to "stay up until midnight, just so we can watch 2016 die!"

And I've even seen broad proclamations of "2016 was the worst year EVER!" Just scroll through Twitter if you don't believe me.

Worse than 1348, the year the Black Death reached England, spreading through most of Europe and parts of Asia and the Middle East? Now known as Bubonic Plague, the heinous disease would claim almost 60 percent of Europe's population (taking around 1.5 million human lives) and creating a series of religious, social, and economic cataclysms that would rock the world for centuries.

Worse than 1666, when The Great Plague of London swept across England? It was like Black Death, The Sequel, claiming the lives of more than 100,000 people. And just when you thought the Plague was enough to classify a year as pretty darned shitty, 1666 decided to throw in The Great Fire of London just to keep things real. The fire destroyed over 70,000 homes... which might have been a good thing considering all of those Plague germs laying around. But I wouldn't mention that to anyone whose home just went up in roaring flames if I were you.

Would you say 2016 was worse than 1919 when an influenza pandemic (which started in 1918. Another pretty shitty year) swept over the planet? That was a neat little population reducer, killing off about three to five percent of the world's humans. Also that year, Germany was strong-armed into signing the Treaty of Versailles, which pinned all the blame for World War I on them, plunging that country into a huge economic depression setting the scene for Adolf Hitler to rise to power.

Which brings us to 1933, the year Hitler became the chancellor of Germany and opened the first concentration camp at Dachau, where tens of thousands of prisoners would die. How does 2016 measure to this one? Keep in mind this was also the worst year of The Great Depression. One in four American citizens were unemployed and trying to figure out how to keep their families fed.

How about 2001? Remember those thousands of Americans who lost their lives in the al-Qaeda hijackings that targeted the World Trade Center and the Pentagon on September 11? Almost 3,000 innocent people died in that one. It also marked the beginning of the War on Terror which has also cost the world thousands and thousands of lives. Have we forgotten that? Even when we promised we wouldn't? 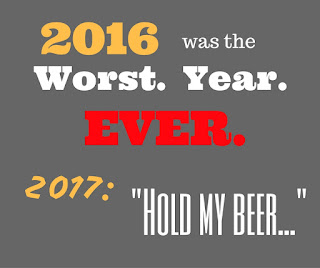 Are a few celebrity deaths (although admittedly brilliant celebrities) enough to trump pandemics and war and genocide? Even when we toss this past U.S. presidential election and Brexit into the mix, 2016 still seems relatively tame.

Just trying to throw a little cold harsh perspective in your face, lest 2016 leave you feeling like you need to cower in a safe space with some coloring books, play doh, and some cute friendly therapy dogs because you just can't even. Maybe people are whining about 2016 and it's "Worst. Year. EVER." status, because we've watered down history and discouraged critical thinking. Maybe our failing public education systems are to blame. I mean even a vague understanding of world history should keep anyone from casting such a sweeping claim. Let's be honest, there have been way shittier years in human history than 2016. In comparison, 2016 looks like some sort of punk poser.

Just stop it with the insults to 2016. Sure it was more than a tad on the crappy side, but 2017 is close enough to hear you now. I don't want it to think all of this whining and moping and complaining is some sort of challenge. We don't want 2017 lurking just a few short days away to hear our ranting. We don't want it to come crashing in on January 1 screaming, "You thought 2016 was bad? Here.... Hold my beer and WATCH THIS!"