Don't Panic! Southerners Do Know How to Handle Snow

Right now the South is bracing for Snowpocalypse 2017. A few days ago, when the weathermen first dared suggest snow was on it's way, the entire population of North Carolina lost its mind. The mad dash to the grocery store for bread and milk ensued, and the aisles at the local Piggly Wiggly became the cornucopia scene from The Hunger Games. Hell hath no fury like a silver-haired old lady trying to grab the last half-gallon of 2%. Heaven has no rage like the mayhem on the bread aisle.

Like most of my neighbors, I've been stalking The Weather Channel for the past 72 hours like a psycho lunatic, monitoring the maps and hourly forecast, trying to pin down just when the flaky white stuff will make it's appearance. The projected time of arrival and amount of accumulation has fluctuated significantly, but the consensus seems to be that the snow will be preceded by some rain showers starting sometime after 7 PM (which will likely wash away all of the salty brine that was sprayed on the roads two days ago).

In a true Southern overreaction, the public schools have decided to close two hours early. Just in case they aren't able to get everyone safely home before it starts raining at dinner time.

This is why our Northern cousins scoff at us. We over react. Not just to snow, but to the mere mention of snow. Days in advance.

And then we don't know how to plow it, or drive in it, or send our kids to school in it. Just a few slushy flakes and we're declaring a state of emergency and cancelling everything. It's like we don't know what do with it. 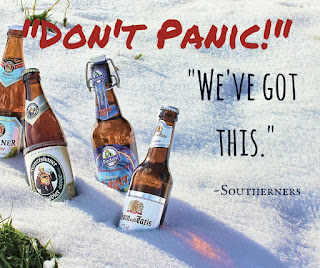 Sure there is a mad dash to the grocery store for bread and milk and alcohol, but it's mostly because we're preparing for a grand party. We know that life will basically stop for at least 24 hours (but probably more), that we will hunker down, wear warm socks, and binge-watch Netflix. It will be glorious as we stoke up a fire, eat some milk sandwiches, kick back and relax. We won't be able to go anywhere, after all. Everything will close. Everything. The stores. The schools. The highways.

But before the relaxing, we'll pile on 27 layers of thin cotton clothing and wrap our feet in plastic bags (There's really no reason to own snow gear when we only see snow a few days each year) to venture outside. We will pelt each other with slush balls and make icy, muddy snow angels. We will catch flakes on our tongues and make sad excuses for snowmen. We will find a way to sled on even a half inch of slushy ice, not on fancy sleds but on trash can lids and laundry baskets and cardboard boxes, flocking to the overpasses if we have to (Actual hills are hard to find in the South East). Or we'll just hook our kids up to an ATV or the back of a pick-up and drag 'em around. Southerners know how to have fun. (This is also why the local hospitals must remain open during snowstorms. No one said we were smart. Have you seen our standardized test scores?)

We all know that the snow isn't going to be that serious. Heck, the temperature is supposed to be back in the mid fifties by Wednesday. No one is going to be trapped inside for days, forced to eat their pets or burn the furniture to survive.

But there's more to life than just surviving, on a snow day or any day. It's something we Southerners understand. It's why life seems to move slower here. We know that life isn't always about hurrying to get somewhere you aren't. Southerners know how to have fun. We know how to party. It's a tradition we hold as dear as sweet tea, ball caps, and Mama's fried chicken. That's why all y'all (This is proper Southern grammar. Please hold your scathing emails.) head down here for Spring Break and Summer Vacation. We not only know how to "raise hell" but we also know how to relax, take things slow, appreciate the finer things in life.

This weekend those finer things will include homemade snow cream, hastily built snow people, rosy cheeks on happy children, and a day off. So scoff in wintry-driving self righteousness if you must, grumpy Northerners. But I think we Southerners know exactly how to handle snow.

Y'all should be jealous.
Posted by ajoneswebb at 12:18 PM