My Take on the Chick-fil-a Stupidity

This whole Chick-fil-a drama has gotten me in a bit of a tizzy.  I know I'm normally one to stay away from political and religious controversy, but I'm more than I little tired of seeing all of the bashing on both sides of this topic.


It utterly stuns me that tens of thousands of self-proclaimed Christians flocked to local Chick-fil-a restaurants across the country to show their support of owner Dan Cathy and his stance on "traditional marriage".  And the reason it utterly stuns me is because, in the grand scheme of the universe, this subject is such a very small thing. 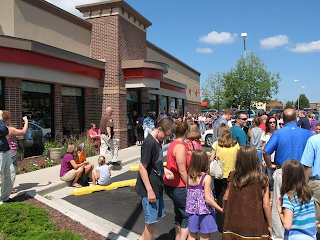 Of all the problems...all of war and hate and homeless, starving, sick people in the world...whether or not a Christian eats a greasy, MSG-laden chicken sandwich seems quite unimportant, doesn't it?  And Christians of all people,  people who claim to serve a loving and merciful god, can't seem to find something more constructive to do with their time and consumer dollars?  Do we ever see numbers of Christians lining up to serve meals at local soup kitchens?  Or feed the homeless on the streets of our cities?  Or wipe the tears of orphans in war-torn countries?  Or spoon soup into the mouths of the sick?  Or get their hands dirty in any way in service to their fellow humans?


I know I can't lump all Christians into this category.  I am afterall, a huge fan of Mother Theresa's selfless commitment to the poor.  But your typical soccer mom with the fish decal on the back of her minivan isn't doing much.  Except taking her well-fed, well-clothed, middle-class american children to Chick-fil-a.


And as for those of you on the other side of the issue, Christian or not...ask yourself what you've done today to make the world a better place.  If you've chosen not to spend your hard-earned dollars at a restaurant which spends it's profits on causes you do not believe it, great.  But what HAVE you spent your hard-earned dollars on?  Perhaps you should donate some cash, perhaps what you might have normally spent on your deliciously greasy chicken sandwiches, to a charity that works to actually make some sort of difference in the lives of real people.


Please remember that the people you are bashing on Facebook, you know those people gazing from the other side of the fence.  Yeah.  Those are real people.  Not just pixels on a screen.  Those are people with feelings and families.  People who get up each morning and are generally productive members of society.  They get their kids ready for school, and drink coffee, and drive in traffic, and mow the lawn on Saturdays.  They have hopes and dreams.  They worry about paying the bills.  They are basically just like you.


And they deserve respect.


Think of the difference we could make in this world if we stopped expending so much mental energy fighting, on name-calling, on stinking social media and actually did something worth doing.


That said, I have a dear friend, Bonnie whose husband recently collapsed during Army boot camp.  He's been diagnosed with a rare disorder, Guillain-Barre syndrome, causing his immune system to attack his nerves. She has flown from North Carolina to Missouri to be with him during this long and taxing ordeal.  And that means she's not at work, and shouldering the expense of staying long-term in a hotel.

So today's lunch money is going out to Bonnie and her husband, Jeremy.  Hoping to make this ordeal a tiny bit more bearable.  Here's the link so you can donate if the mood strikes you, too.

Here's to making the world a better place...
Posted by Alice Jones Webb at 9:45 AM

And yet, another thing you shouldn't even be touching. Yes, to all of the above. You should really get out more.