I Am Not Responsible for My Children's Successes

I recently received the following brief email from my daughter, Hannah's math teacher.

"I was beginning to think I picked up the wrong answer key for the test until I got to Hannah's paper. She made a "110" on test today. You and your husband have done a wonderful job with home schooling." 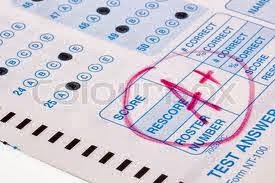 You might remember that my daughter Hannah entered the public school system this year as a high school freshman. Having been homeschooled basically since the womb (I did do an awful lot of talking to her while she floated around in there in fetal bliss), she was given the choice to enter an early college program offered in our county.  She pounced.  And she loves it.

I will admit that I was more than a little nervous about her entering conventional education.  Not only because I have so many philosophical disagreements with the public education institution, but also because I was worried that I hadn't prepared her academically.   I realized that should she somehow struggle and fall short of her peers' performances her teachers would be looking to me to place the blame.

Of course she is brilliant (she must have gotten all of the good genes).  She is flourishing in the program and the email from her math teacher is just a bit more tangible proof.

My initial response was a happy dance which my currently homeschooled children found utterly absurd and then some vigorous patting myself on the back.

But wait.  That's just not fair.

Hannah did this.  Not me.  I can't take credit.

This is a child who is extremely self-motivated.  She decided she wanted to enter the program 2 years before she was even eligible, and then spent two years reading and learning and writing and practicing in preparation.  And now that she's there, it is Hannah that studies for every big math test.  Hannah who spends hours upon hours on English writing projects.  Hannah who gets up every weekday morning at 7 am (That is WAY too early for me) and sits through class and pays attention and absorbs information.

By congratulating me on a job well done homeschooling my daughter, it minimizes her effort.

My children do not belong to me.  I am unable to FORCE them to do anything (I learned this little tidbit super early during my toddler son's first grocery store meltdown).  They are each autonomous human beings.  They make their own decisions.  They set their own goals and priorities.

Do I have some influence.  Yes.  A lot, I hope.  But I cannot take credit for their successes.  Not even a little bit.

And in the same vein.  I will not take responsibility for their failures either.  And that might actually be the tougher lesson right there, especially for my super self-critical Virgo mind.

So congratulations, Hannah.  Well done kiddo.  That was ALL you!  You probably deserve a cupcake or something....but alas...I ate them all while you were at school.
Posted by Alice Jones Webb at 3:40 PM