Being a Winner Doesn't Make You a Bully

Emotions often run high in high school football.  Feelings often get hurt.   Pride often gets injured.  But sometimes one football team is just plain better than the opposition.  And one Texas parent is calling it bullying.

An official report was released today, listing both teams as victims of Buchanan's bullying behavior and "unsportsmanlike conduct".   The father who filed the report said, "We all witnessed bullying firsthand; it is not a pretty sight.... I did not know what to say on the ride home to explain the behavior of the Aledo coaches for not easing up when the game was in hand."

But according to interviews with Coach Buchanan, he pulled his starters (his very best players for you non-football people) after the first quarter.  He even brought in his third string players (those are the bench warmers, again for you non-football people) and by the third quarter he was letting time on the clock run continuously in an effort to just get the ridiculous excuse for a game over with.

It was definitely a very one-sided victory.  Obviously, Western Hills High School has a football program that just can't compete on equal footing with Aledo's.  This must have been a frustrating game to witness, probably even embarrassing. 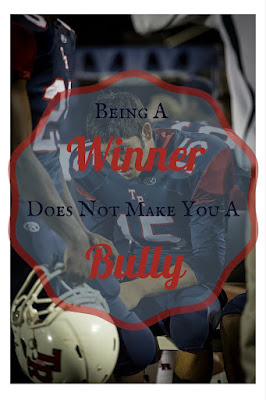 But sorry, Whiny Dad, this was not bullying.

Just because a team is better than yours...perhaps because they put more emphasis on their sports program....or they have a more experienced coaching staff....or players with more physical prowess....or a more stringent practice regimen....Just because a team performs exponentially better than your team, it does not mean they are bullying your team.

What did you expect the other team to do?  Stop actually playing the game so your team could catch up?  That doesn't sound terribly sporting, does it?  Should coach Buchanan tell his players, kids who have invested their time and sweat, kids who practiced hours a week in preparation for a Friday night game, should he tell those kids that they just can't make a touchdown.  "Sorry guys, I know you've worked hard and you want to use what you've learned....I know I've told you always do your best....but if you get the ball, just take a knee so these other guys won't feel bad.  We don't want anyone to feel bad, do we?"

Perhaps, Whiny Dad, you should have explained to your son that what he witnessed out there on that field was the product of hard work and good training.  Perhaps you could have used the experience as a point of motivation instead of pointing fingers at the other team's coaching staff and yelling, "Poor Form!"

No, Whiny Dad, I call "poor form" on you.  You can't raise your children to think there is something wrong with people who are better at something than they are.  You can't teach them that if someone is smarter or happier or stronger or faster or richer than you that they are just bullying you.  Well, I guess you can, but I don't want MY children to live with such a sick and distorted view of others.  I don't want them to look at others with such disdain.

Remember, Whiny Dad, that your son will very shortly be an adult in this world.  And let's hope that he'll be a productive member of society.  There are always going to be people in the world out there that are better than your little baby boy somehow.  Instead of teaching him to think those people are just trying to make him feel bad about himself by flaunting their "superiority", teach him to just try looking at himself instead.  Maybe he should ask what they did to get where they are, what they did to be successful...and then encourage him to just go do those very same things.

All I'm saying, Whiny Dad, is maybe you could encourage your son to work hard and strive to be better instead of fussing about what bullies the other team is...because, Sir....that just isn't fair.

And maybe grow a spine.
Posted by Alice Jones Webb at 10:44 PM