Take a look at this picture... 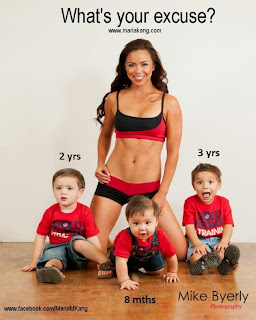 This little gem of inspiration has been flashing all over the internet this past week.  It's a picture of Maria Kang, fitness enthusiast and mother of 3 young boys.  She's in pretty good shape, huh?  You would think people, especially mothers, might look at her as a source of inspiration, right?  The poster child for "If she can do it, I can do it".  That instead of the doom and gloom mentality of "Look at what these kids did to my body", they might embrace the possibilities of what hard work and dedication to a goal can achieve.

Apparently, not so much...

Because this woman has received some major backlash from posting this picture.  The haters that lurk in the creepiest corners of the internet have chosen poor hardworking Maria as their next victim.  They have crawled out of their slimy holes to criticize everything from her motives to her motherhood.  She's been called a fraud.  She's been accused of fat shaming.  She's been accused of being a bad mother because "she spends too much time in the gym" thus neglecting the raising of her children.  She has even had luck blamed for incredible level of fitness (in other words she just has "good genes").

This woman has accomplished something she is obviously proud of, otherwise she wouldn't have posted pictures to the internet.  If it somehow makes you feel bad, that is not Maria's fault, it's yours!  It is utterly wrong to attempt to diminish someone else's success just to make yourself feel better about where you stand right now.

If you don't like where you are, damn it, get up and do something about it.  Otherwise, just keep scrolling and keep your mouth shut!

What kind of survival mechanism keeps us as humans pulling each other back into the masses?  We're like crabs in a basket.  Whenever one tries to climb out of the post and be something, the rest of the crabs try to grab onto their back fins...not so they can get a boost up and out of the post...but to pull the crab back down into their own misery of mediocrity.

When someone succeeds...at whatever....it does not diminish one single other person's value as a human being.  But it might strip away some of their excuses for wallowing around in the ordinary.  It's okay for individuals to rise above the masses.

What I'm trying to say is this: Stop looking at people who are financially well-off, or successful in their career, or happily married, or in amazing physical condition and just assuming these people somehow are just luckier than you.  No, no, NO!  You don't just stumble across good things.  You have to work for them!  Don't think that you would be just like them if you'd been born under different circumstances.  You have to start from where you are and move towards what you want in life.  Just like they had to.  They had to earn it.  Just like you.

So if you want a better body, put down the chips and go take a walk.  Start from wherever you are.  Will you end up looking just like Maria Kang?  Absolutely not.  You know why?  Because you're not Maria Kang.  You are you.  But you can still be a better you tomorrow, next month, next year than you are right now.  But you have to give up the security blanket of excuses that you so desperately cling to.

Stop thinking that your only recourse in the face of someone else's success is to discredit that success.  You don't have to feel insulted when you see evidence of another's greatness.  You have greatness inside of you, too and it's just sitting there inside of you waiting to be unleashed.  You might have to do something uncomfortable to get here, but you can be great, too.  So get off you duff, quit wasting so much energy trying to discredit others, and use that energy to pull yourself up by the bootstraps and do something worthwhile instead.

And before you go lashing out at me, I have plenty of things to work on myself.  I know I'm not the best person, and I throw around my own excuses from time to time.  But that's my problem, not yours.  Focus on pulling yourself up out of the crab basket.  And I'll promise to do the same.

Great way to put it Ms.Alice