One of the reasons I chose to live in this small town was it's low crime rate.  I know most of my neighbors (even if some of them aren't my favorite people in the world) and I've never felt unsafe.  I often walk my dogs late at night right through the middle of downtown without a second thought in regards to my safety.

But even small towns have crime, unfortunately.  Within the last two months there have been two reported assaults just around the corner from my home.  Both crimes were committed against women going to their vehicles late at night.  Both were violent.

I work late nights at a restaurant just down the street from my house.  After work, myself and my coworkers filter out to our vehicles, some of which are parked down poorly lit side streets.  Call me motherly, but since the recent attacks I've been reminding my young female coworkers to have someone walk them to their cars, just as a precaution. 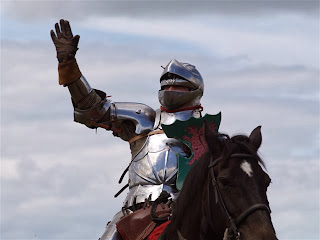 So I have apparently been designated as the official escort.  Someone (a male at that) even suggested that I am the most qualified anyway since I am a black belt in karate and "could kick anyone's ass".  (Not my words, hence the quotation marks.)  But really, it's just because the guys don't want to do it.  Whether due to apathy or laziness, perhaps chivalry really IS dead. Whatever. So little ol' me has been walking through back streets helping my coworkers get to their cars safely, because well....the guys can't seem to be bothered with it....so we are left to fend for ourselves.

There are several problems with this arrangement.

Criminals like to victimize people they see as weak.  The weak make easy targets.  A woman walking alone at night would seem like an easy assault.

Like it or not, woman are the weaker sex.  No amount of time in the gym hoisting heavy weights is going to result in strength equal to most men, even the skinniest ones.  It's just not possible.  Women are built differently.  It's just the way it is.  If you don't like it, take it up with Mother Nature.

And me walking these female coworkers to their cars may help keep them safe, but leaves me walking alone back to the restaurant.

While I'd like to think I could defend myself should the need arise, I'd prefer the need NOT arise.

I love the old Karate Kid movies, the really good ones (except for Karate Kid 3.  That one was just stupid and I like to pretend it never happened.) with Pat Morita playing the wise old karate master, Mr. Miyagi.  While these movies offer a plethora of quotable gems, one of my all time favorites is this one, "Remember, best block: No be there."

The best way to get out of trouble is to not get yourself into trouble in the first place.  And a woman walking with a man (any man, even a scrawny uncoordinated one) late at night makes a less desirable target than a woman walking alone.

So do we NEED a guy to walk us to our vehicles late at night?  Need might be a strong word.  But I'll tell you one thing, this lady right here on this side of the keyboard, would rather humble herself just a little in the eyes of feminists everywhere.  I'd rather have a guy walk me to my car than to potentially have to face an attacker who perceives me as an easy target any night.

That might make me weak.  I think it makes me smart.
Posted by Alice Jones Webb at 11:17 PM