My Thoughts on the Death of Nelson Mandela and the U.S. Flag at Half Staff

I don't usually write on political topics.  Mostly because I just can't stomach the passionate controversy it spawns.  I realize not everyone thinks like me (and it's probably a damned good thing) and I do not enjoy political debate AT ALL.  But it's early and I haven't finished my coffee, so I may not be completely conscious or reasonable or sane.

Nelson Mandela died yesterday at 95.  We knew it was coming, he had been in ill health for some time, and he was, after all, 95.  A pretty ripe old age.  For my young friends who admitted to not knowing who the heck this Nelson Mandela guy was ("What movies did he play in?"), here's the short version:

Nelson Mandela was a South African anti-apartheid (that's like South Africa's version of Jim Crow laws...but on steroids) icon.  He spent 27 years in prison (for inciting unrest and violence in his quest for equality of peoples) then after his release, led his country to democracy (even though history argues he may have been a communist) and then became the country's first black president.  He served two terms and then called it quits and spent much of the remainder of his life speaking out against oppression and often the United States (But, hey!  Don't we all?)  Oh, and he won the Nobel Peace Prize in 1993. 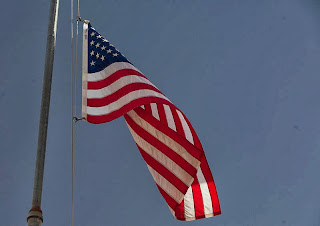 Now that you are all caught up, you probably heard on the news (Okay, maybe through your more informed friends via your Facebook news feed.) that President Obama ordered the United States flags be flown at half staff to honor Mandela.

It is well within the president's rights to order our nation's flags be flown at half staff.  In fact, he's the only one that can order this symbol of tribute...he can order it for anyone he pleases...and it is often ordered for the death's of international figures (the flag flew at half staff after the death of Pope John Paul II).  But the gesture is usually a symbol of our nation in mourning (think Sandy Hook and the Boston Marathon bombings, both which led to the presidential proclamation of flags flown at half staff).

Nelson Mandela was a very brave man.  I don't think that's very debatable, even if you never agreed with his politics or humanitarian causes.  He fought for a cause he believed in (and what I believe personally was a very noble cause, the equality of humans regardless of skin color) against a strong and oppressive government.

However, there are a few things the media would like to conveniently sweep under the rug.  Because of convenient omission of facts, most people believe he was unjustly jailed for speaking out against apartheid.  That he was a violent terrorist is completely left out.  Mandela was  head of the Umkhonto we Sizwe (MK for short...Don't ask me why.), the terrorist wing of the African National Congress (ANC...this one makes more sense).  At his trial, he plead guilty to 156 acts of public violence, such as planting bombs in public places resulting in the deaths of many innocents, including women and children.  Not bad for a future Nobel Peace Prize winner  (Kinda like drone strikes on children...ahem....President Obama).  Equality by any means necessary.  Mandela was no Dr. King.

AND Mandela spoke negatively about the United States on more than one occasion.  At an International Women's Conference in 2003, he is quoted as saying, "If there is a country in the world that has committed unspeakable atrocities in the world, it is the United States of America."  While I think he is pretty spot on with this statement (because the US has definitely committed some nasty atrocities), it doesn't sound like someone we would be mourning as a nation.

If we continue to lower our flag in tribute to every foreign leader who has ever served and died, no matter how much folks respected and admired them (or how undeserved that respect and admiration may be)...well...in my opinion, it cheapens the tribute.  The lowering of the stars and stripes to half staff should be reserved for times of serious grief and turmoil.  It shouldn't be dropped like a hat for the death of every famous person, Nobel Peace Prize winner or not.

And since most of my young friends were not even aware of who the heck Nelson Mandela was or what he fought for....can we REALLY consider ourselves a nation in mourning?

Of course, the ignorance of our young people and the blatant failure of our country's educational system might be reason enough for mourning.  On second thought, maybe we should lower the flag anyway...

Email ThisBlogThis!Share to TwitterShare to FacebookShare to Pinterest
Labels: politics