Terroir and My Southern Accent

I have a southern accent.  It makes sense, because..well...I've lived pretty much all of my life in the South (Yes, Virginia counts!  I will remind you all that Richmond was the capitol of the Confederacy.)  But some of you who know me might be a little confused.  I don't ALWAYS have a southern accent.  In fact, most of the time I sound like I'm from somewhere in the Midwest.  But that lyrical (yes, I said "lyrical") southern accent of mine comes pouring out every once in a while, usually when I'm talking about something that reminds me of home or my childhood. (Hunting as a conversation topic brings it forth almost immediately, as does fishing, hound dogs, bluegrass music, and beating people up.)  It also might sneak out if I'm particularly comfortable with you (and that doesn't include a whole heck of a lot of people so count yourself lucky if you've caught it).  I honestly have no control over it, and usually am not even aware that I've entered country girl mode.

I've had the sincere pleasure of working with Inez & Stephen Ribustello at their local Tarboro restaurant, On The Square for the past four years.  Inez knows wine.  I mean she KNOWS wine.  She's passed the Court of Master Sommelier's Advanced Exam, which is no small achievement, and she has a whole resume full of wine related awards and achievements.  She is one of the smartest people I know, and I can't begin to tell you how much I admire her.

When I started at on On The Square four years ago, I could barely open a bottle of wine.  I knew that whites were served chilled and reds at room temperature, and that was about it.  I knew I liked riesling and pinot grigio, but I couldn't tell you why. But since then, I've learned more about wine than I even knew there was to know (Although Inez has likely forgotten more about wine than I could tell you on my best days).  One of the things I've learned from Inez is the concept of "terroir". 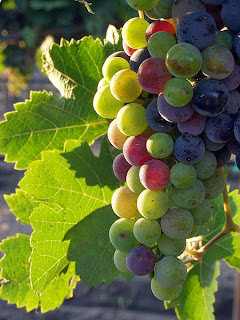 "Terroir", it's not some yappy lap dog.  It's a wine concept, that wine from a particular patch of ground expresses characteristics related to the physical environment in which the grapes are grown.  Terroir can be summed up as a wine having a sense of place or "somewhereness".  So no matter how far away from "home" the wine is shipped or how long it has aged on a shelf in some dark wine cellar, you can still tell where the grapes were grown.  In essence, the wine doesn't lose it's roots.  It still knows where it came from.  It's flavor is rooted in the soil where it originated.

My southern accent is due to "terroir".  Those long vowel sounds and country expressions come through because they belong to my sense of "somewhereness"...my sense of home.  And no matter how I age or how far from home I travel, it will still be there, the flavor of the soil where my roots grew deep.  It's the reason you'll still hear me say "yes, sir" and "no, ma'am".  It's the reason I like my tea sweet and my fish fried.  It's the reason I have a strong sense of family.  My accent is just an expression of where I grew up.  And if you're paying attention, you'll catch my terroir just like you will catch it in a good glass of wine.  But only if you're really paying attention.

Although, I would probably still prefer cheap beer swigged straight from the bottle than a pricey glass of wine.  And if there's a pick-up tailgate to sit on while I drink, well.....that's even better.  And that's just terroir, too.
Posted by Alice Jones Webb at 8:35 PM

Email ThisBlogThis!Share to TwitterShare to FacebookShare to Pinterest
Labels: family