The Irony of Black History Month

February is Black History Month.  It's a short month, but for its 28 days, America's school children are exposed to great historical figures like Crispus Attucks (first casualty of the American Revolution), Harriet Tubman (famous conductor of the Underground Railroad), and Martin Luther King, Jr. (prominent leader of the American Civil Rights Movement).

I think Black History Month is a pox on our educational system.  Call me crazy (or racist if you want to), but I just can't fathom why school children can't learn about these prominent black figures in context with the rest of history.  Surely we can squeeze ol' Crispus Attucks right in there with all the other dates and names and places of the Revolutionary War that must be memorized for some useless standardized test.  And just as easily, Harriet Tubman fits into discussions of inter-state tensions leading up to The War Between the States.  And even though Martin Luther King, Jr. already garners his own holiday, we might be able to squeeze him into History class when the American Civil Rights Movement comes up in the horribly limiting text book.

History in context.  What a novel idea?

I guess I think more like Morgan Freeman (call him a racist, too if you feel like it).  In a 2005 interview for 60 Minutes, the Academy Award-winning actor said, "I don't want a Black History month.  Black History is American History." 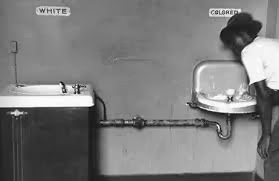 I applaud you Mister Freeman!  For all the Americans who marched and protested and sat at lunch counters and refused to move to the back of the bus, Black History Month seems like a great big giant slap in the face.  To all of those school children that were escorted by armed troops to formerly white-only schools because we realized that separate could not be equal, a national Black History Month must appear as a gross regression into segregation.

Black History Month forces great American heroes to be pulled out of their historical context and singled out because of their race.  They become BLACK leaders and BLACK politicians and BLACK scientists and BLACK entertainers.  (Notice the emphasis on the word 'black"?)  It's kind of like a virtual lynch mob only it's the schools (and blacks themselves) singling out these individuals from the crowd of history's great achievers because of their race.  By segregating black history from American History at large, doesn't it kind of relegate separated black history to the same standard as the less-than-standard water fountains that were common during the Jim Crow era of segregation?

I say leave them where they are.  Surely Harriet Tubman's heroism isn't any more or less spectacular because of her race...because what she did was pretty freakin' heroic.

Because shouldn't someone be successful because they are successful?  Shouldn't they be influential or powerful or intelligent because they are influential or powerful or intelligent?  Race has nothing to do with those qualities.  The more we emphasize people's differences and the more we make those differences an issue, the more of an issue they become.  If we want our society to be "colorblind", if we want that our children "not be judged by the color of their skin, but by the content of their character", then we need to stop defining people by their color.

My daughter's school-sponsored a Black History Month shindig last week.  It included a motivating speech by a successful (black) graduate of the school, several presentations on historic black figures, and a performance by an African rhythm and dance troop...and a group singing of "The Black National Anthem".

No kidding.  The entire staff and student body were asked to stand and sing together.

I didn't even know there was such a thing as a "Black National Anthem," so I guess it was an educational experience.  But the concept makes me twitchy.  We do after all, have a National Anthem, one meant for all Americans.  But referring to a song as the "Black National Anthem" can create a lot of confusion and tension, especially here in the rural South where race relations can sometimes be tenuous.

I find it thoroughly ironic that the given title of this so-called "Black National Anthem" is "Lift Every Voice and Sing".  Every voice.  Not just black voices, but EVERY voice...which would include...well, EVERYONE. Interesting that the hymn emphasizes unity.   And it is a beautiful hymn which sings of very American virtues and struggles, like liberty and hope and faith, about learning from history's mistakes.  This is a song for all Americans, not just those with darker skin pigmentation.

So maybe we should just toss the "black anthem" label...and toss black history month out with it.  Perhaps we can then focus more on our similarities than on our differences.  Perhaps we can focus on unity and brotherhood.  Perhaps we can strive towards a more cohesive society where our outward appearances are not as important as our integrity and our character.

At least that's what I want for my children.
Posted by Alice Jones Webb at 11:22 PM