Lessons Learned From A Desktop Aquarium

My daughter has an aquarium.  It's just a little ten-gallon with a few guppies and a snail named Gary, but to her it's the "coolest thing EVER!"  She loves it, spends hours in front of it talking to the fish and telling stories about Gary the Snail and generally smiling and loving her underwater friends.  That aquarium is her happy place, a source of entertainment and joy.

That aquarium is the bane of my existence. 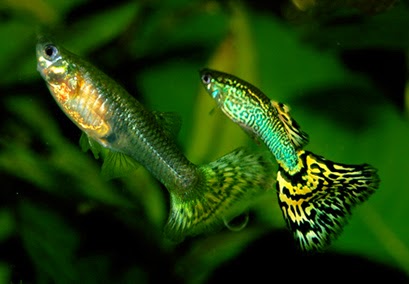 Two weeks ago, a member of my daughter's precious guppy family came down with ick.  Ick is a nasty little white parasite that spread its way through that fish tank like the freakin' black plague.  It comes on usually due to stress, and let me tell you these guppies must have been more stressed than a bunch of Wall Street brokers right before a stock market crash.  Those fish must have been simultaneously going through divorce, bankruptcy, and unemployment.  One day they seemed normal and the next they looked like they needed a prescription for Prozac. My daughter camped in front of her aquarium, crying giant tears, and biting her nails, and otherwise willing her fish to be healthy.  It was stressful for me as a parent, and I started checking for signs of my own ick infestation.

I missed the trauma of the first ick casualty.  I was at work and my dear patient husband presided over the memorial services of a guppy named "Tartar Sauce".  There was much shedding of tears by the youngest accompanied by sarcastic eye rolls from the teen-aged siblings.  He was buried in the butterfly garden (and was perhaps dug up by the family cat later) after a heartfelt eulogy...or so I was told later.

When fish number two bit the dust (maybe "bit the bubble" would be the more appropriate term for a fish death?) I swooped in to take care of things.  Not wanting the dead and decaying body of "French Fry" to upset the delicate chemical balance we were futilely attempting to maintain, I scooped the earthly remains from the surface of the tank and promptly flushed them down the toilet.

When my daughter heard the flush of the commode, squalls of overwhelming grief pierced the air.  My husband just shook his head quietly as if to say, "amateur" as he attempted to assuage the extra grief I had caused by my unceremonious disposal of the ick-infested corpse.

Three more fish gave up the ghost over the next 36 hours.  "Fish Stick" and "Cole Slaw", along with the baby guppy "Steve",  are now taking a big time dirt nap in the butterfly garden right next to their fallen brother (although I suspect the cat may have enjoyed a sushi snack shortly after their burials).  After gallons of tears and days of worried depression on the part of my daughter, I think I may have achieved a tenuous balance of acceptable aquarium conditions.  One fish remains.  "Ketchup" is the lone survivor...Gary the Snail is still hanging on but he's suffered some major shell damage from the rock bottom pH... things are not looking good, but we are hopeful.  Your prayers are appreciated.

Through this traumatizing ordeal with the aquarium, I've learned a few valuable lessons.

1.  No matter how bad things are, you can always make them worse.  Disregard the reality of the intense emotional grief of a child losing a 1 inch long fish that only cost $1.49 at the local pet store, and you WILL pay the price.  And explaining the honor of a "burial at sea" to a grieving child in an attempt to justify your rash impulsive decision to flush a family pet is not an easy task.

2. Price does not necessarily equal value.  Guppies are cheap little boogers.  It's why we bought them. I figured if the poor critters were overfed...or underfed...or eaten by the cat... or died of boredom, it wouldn't be any big deal.  Each one was less than two dollars (and Steve was free being the product of the consummation of Fish Stick's and French Fry's nuptials), in my clouded adult mind, these fish weren't worth very much.  But price is what you pay; value is what you get.  What my daughter got was the creation of a world of underwater friends and family. She got joy and satisfaction and the responsibility of caring for another living thing.  She got relationships.  She reaped hours of enjoyment and dedication to these finned family pets.  And when she lost them, believe me it was a BIG deal.

I'm disappointed that I didn't realize this before.  I've often said that the value of a human being isn't based on his income, but on what he contributes to the lives of others.  I suppose it's the same for fish.  Their value isn't in the pet store price tag, but in what pleasure they contribute to the lives of their pet parents.

3.  Worry solves nothing.  If my sweet daughter and I could have worried that aquarium water back to healthy fish-sustaining balance, I swear it would have happened.  But all of that mental energy was spent needlessly over something so completely out of our control.  In the end, after we had done everything Google and the pet store fish gurus told us to do, all we could do was sit back, wait, and hope for the best.  Letting go of the need to be in control during a difficult situation is extremely difficult, but necessary.

4.  Balance is extremely hard to regain after it's lost.  The delicate chemical balance of nitrates and bacteria and oxygen and pH in that little desktop aquarium is really a cheesy metaphor for life.  Once the balance was tipped, it took a whole lot of effort, several trips to the pet store, and a lot of finger-crossing to restore.  Life is kinda like that, too.  It's much easier to maintain a balance of family and health and fun and finances than it is to restore that balance once it teeters off.  Plus there will be a lot fewer tears and sleepless nights and stressful worry so long as the balance is upheld.

5.  Upfront cost does not equal total investment.  Those cute little fishies were pretty cheap straight out of the pet store tank, but I pumped more money in two weeks into healing those fish than I've spent in vet bills on my two dogs this entire year.  Just because something is inexpensive at the outset, doesn't mean it won't cost you more over time.  This is particularly true of cars and appliances...and children.  Children get pretty expensive...especially once they hit puberty.  So don't be deceived into thinking you're getting a good deal because something is cheap at the outset.  Consider what you are willing to invest long term (and I don't mean only in terms of money, either).