Keep It To Yourself

They leave women feeling degraded, dirty, unsafe, less than human.  It's difficult to put into words the dark smutty feelings that men leave all over women with their sexual comments and mental undressing.  And men will never understand it, either...the discomfort and fear of being stared at while pumping gas or eating pizza or waiting for the bus or walking the dog.

As parents, we want to protect our children from the pain and cruel realities of the world at large for as long as possible.  It's the reason we strap them religiously into their car seats as babies and force them to wear their bicycle helmets when they get older.  We don't like to see our children hurt...or afraid.  If you are the parent of a daughter, you surely realize that there are crude truths specific to their gender that we try in vain to hide them from.  There are forms of attention that we don't want the world to focus on our daughters.  We don't want them to feel those dark smutty feelings that we mothers already know all too well. 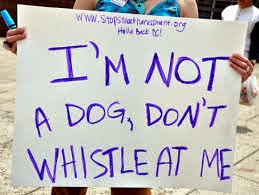 I clearly remember when I received my own vulgar and indecent welcome to womanhood.  I was 13, still only a child although my body was starting to say otherwise, walking down the street minding my own business when a car slowed down so it's two occupants could yell shit at me as they passed.  "How about you lick me?" one shouted as the other "man" made kissy noises at me. I was appalled and embarrassed, quickly averting my eyes to stare down at my feet that suddenly found themselves quickening their pace to get away from the unwanted (and unwarranted) attention.  I still can't quite figure out why I felt like I had done something wrong.

Since then I've been cat called and gawked at while wearing jeans, dresses, shorts, yoga pants, make-up, no make-up, heels, sneakers...it doesn't matter.  You can't say a woman is asking for that kind of attention by how she dresses when it doesn't seem to matter if she wears a canvas sack or a sequined miniskirt.  And it inevitably brings feelings of shame and embarrassment and sometimes varying amounts of fear.

So when my sweet, wonderful, amazing daughter received her horrifying welcome to womanhood, I wanted to run shrieking after the man and claw his eyes out while continuously smashing my knee through his groin. (I realize violence isn't the answer...but it is an option, and this guy is lucky he didn't actually touch my daughter.) A passing intoxicated punk shouted at my fifteen year-old daughter while she waited in her own yard for the dog to do his business, "Got any pussy over there?"

But like it or not, the world is not usually a safe place for women.  I must teach my girls to be careful how they sit, and to travel in groups, and how to yell "fire" instead of "rape" to get a response from people should they be in danger.  I must teach them how to keep their eyes on their drinks, to travel in well-lit and well-populated areas, to avoid eye contact with strange men, and how to break a wrist grab.  I must teach them the skills of self-preservation all women must learn, because the odds are not on their side.  One in three women in the United States becomes a victim of sexual violence.

Not all men would hurt a woman.  Of course not.  Not all men are like that.

But all women have been dehumanized by a man at some point in their lives.

Not all men would yell sexual slurs at my daughter, but even one is too many.

And just for the record, I have NEVER, not even once, felt any sort of primal sexual urge after a strange man has whistled at me or made obscene gestures or otherwise objectified me.  NEVER.  Catcalling is never cute.  It's never flattering.  It's never funny.  And it is far from harmless.

It may seem like harmless fun, or no big deal, or "just a compliment" but these public displays of sexual desire contribute to a culture that places value on women based on their appearance and desirability.  It reduces women to not-quite-human status.  And that is slippery and dangerous ground.

Some say the answer is for men to remember that the woman on the receiving end of their "compliments" and attention is someone's mother or sister or daughter, in an attempt to remind them of their victim's personhood.  I call bullshit.  A woman's value isn't determined by her relationship to men (whether her father or husband or brother).  Her value is in her existence.  Instead men should remember that sweet pair of legs walking down the street is attached to a human, a real breathing feeling person with dreams and hopes and fears.

We women are sick of the honking sound of car horns directed at us.  We are sick of off-color obscenities - from peach fuzz youngsters to guys with middle-age comb-overs -  shouted at us from car windows.  Stop focusing on our legs or our butts or our boobs and focus on the road.  We are not asking for your opinion or grappling for your attention.  Let us just walk down the goddamned street without fear or embarrassment.

Your desire is not our problem, so try to keep it to yourself.