Gun Advocates Shoot Themselves in the Foot

Don't you just love it when two fringe political action groups duke it out for all the world to see?  No?  Me neither...because it's all fun and games until somebody loses their rights.

This week it was Open Carry Texas ("an organization dedicated to the safe and legal open carrying of firearms in the State of Texas) versus Moms Demand Action for Gun Sense in America (the name says it all, although it's a little wordy and there's not even a cool acronym) and the battleground was Chipotle Mexican Grill.

Under the guise of advancing gun rights, members of OCT swaggered into a local Chipotle with AR-15s and SKs...because you never know when the act of eating bad burritos might necessitate a weapon of war.  Personal protection wasn't the aim of these over-armed cowboys.  No.  They brandished weapons in a family restaurant in a way that screamed "Look at me!  Look at me!"  And when that didn't get them enough attention, they waltzed right into the spider's lair and posted their overly-macho photos to Facebook.

Mom's Demand Action (a pretty militant group in its own right, only without the high-powered weaponry) loves to use social media to "educate" the masses about the terror and danger of scary assholes with guns.  So when douchebag gun nuts rub their guns in people's faces all over the internet, there's going to be a fight.  I mean, you can only shove someone so many times before they come back swinging, and Mom's Demand Action came back swinging in the form of public pressure, demanding Chipotle take a stand against guns in their family restaurants.

While Chipotle has in the past simply complied with local laws regarding the carrying of firearms, the raging battle between OCT and Mom's Demand Action forced them to unwillingly take a side in the gun rights war.  And since the wackos of OCT make even the wackos at Moms Demand Action look sane and reasonable, you can guess which side Chipotle was forced to take.  Monday, the Denver-based company issued this statement:


"The display of firearms in our restaurants has now created an environment that is potentially intimidating or uncomfortable for many of our customers.  Because of this, we are respectfully asking that customers not bring guns into our restaurants, unless they are authorized law enforcement personnel."

Way to force their hand, OCT.  Look, guys! This is why we can't have nice things!

While the members of OCT were not breaking any laws, and were, in fact, "safely and legally" carrying firearms openly, they certainly were not convincing any bystanders to support gun rights.  When a large group of individuals descends upon a restaurant aggressively brandishing rifles while families are scarfing down burritos, it only succeeds in making burrito-eating families feel intimidated, scared, and uncomfortable. These aren't responsible gun owners, they're assholes with guns, and assholes with guns can be pretty freakin' frightening. 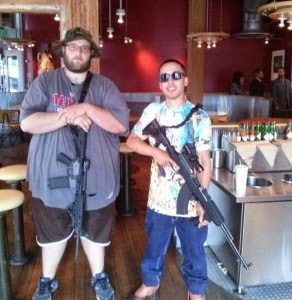 And assholes they seem to be.  The runty punk in the above photo keeps a Facebook page under the name Flakoo Delcampo, which, before it was wiped clean and sanitized, offered some very interesting insights into the mind of this particular OCT member, with status updates such as the following:


“I wanna Smoke Sum Kushh so Badd…But fuckk that…My Babys need me And Not sitting behind barzz….Maintaining…”
“Youngg enough too still Sell Dopee…But Old Enoughh..i Knows betterr..”
“I really apreciate My Friends For being Bitch ass Niggas Made me apreciate da Nigga Within Myself”

This along with some selfies featuring weapons and middle fingers make it obvious this guy is a first-class citizen.

While OCT can associate with whomever it wants, and it certainly can't babysit all of it's members, the likes of this guy leave OCT seeming like a bunch of wannabe thugs and drama queens who aren't content to quietly exercise their right to bear arms, but would rather rub their rights in the faces of the general public until they elicit a response.  Apparently they need attention to soothe their broken egos.  Seems to me these idiots are overcompensating through rather immature posturing.

By painting a picture of the stereotypical gun owner as a pompous gun-toting fool, they've inadvertently shot themselves in the foot.  They may have done more damage for Second Amendment advocates in one messed up public display than Carolyn McCarthy, Michael Bloomberg, and Dianne Feinstein have done in their combined political careers.  Makes me want to whack these idiots up side the head with the butt end of my .30-30.

Do us all a favor, Open Carry Texas, the next time you find yourselves craving a burrito, leave your egos,  flashy rifles, and kush-smoking Rambo wannabes at home.  And maybe consider investing your energy into more constructive forms of gun rights advocacy, like gun safety classes or other forms of public education (in a non-threatening environment, of course).

Unless, of course, you're actually working for the gun control advocates...