Step Aside and Let Kids Fight Their Own Battles

Summer is almost over.  The start of the new school year is fast approaching.  School supplies are being bought, sleep schedules rearranged, classrooms are being organized, and parents, teachers, and students are all starting to get in that back-to-school mindset.  The start of school brings more than homework and school buses and awkward social situations, it also heralds the darker side of kids behavior, the seemingly ever-present and monstrous threat of school bullying.

It would seem that bullying is so odious and horrifying that many schools have adopted no tolerance policies, even landing kids who witness acts of bullying but do nothing to stop it in serious trouble.  Bullying has almost become the new witchcraft.  It's a crime so heinous, that no one wants to be accused of it.  One that brings the masses out to burn the accused at the metaphorical stake.  There are anti-bullying campaigns popping up on school campuses across the country (some government sponsored) and parent-formed groups monitoring bullying in school.  If you listen to the masses, you might believe that bullying has become a virus of epidemic proportions infecting our schools and playgrounds, and it must be eradicated if we are to rescue the younger generation. 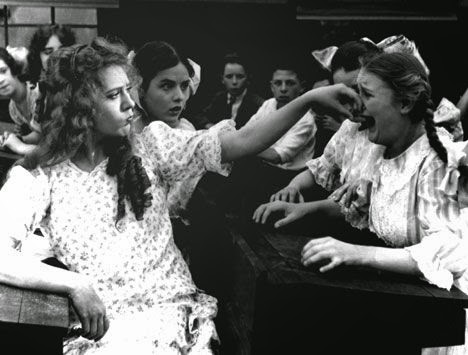 But while bullying has taken on new forms (cyber bullying being the first that comes to mind), it certainly isn't a new rampant plague.  It's been around since the beginning of time... or at least since the inception of compulsory schooling.

Kids have always bullied other kids. It's an unfortunate part of the socialization process. Kids say hurtful and humiliating things, and kids shove kids in lockers.  It sucks.  But what overly-concerned parents and hyper-sensitive kids keep shoving under the bullying umbrella, are often little more than hurt feelings.

For example, consider the parent who accused a high school football coach of bullying after a 91-0 blow out game.  Or the "mean girl" who told a second grader she wanted to eat lunch with someone else.  Or my own child who was accused of bullying for thinking bad thoughts and vaguely "making me feel unwelcome" by the accuser.  And then there are the false accusations of bullying that can ruin an innocent student thanks to harsh no-tolerance anti-bullying policies.  And kids will accuse other kids unjustly in frustrated or mean-spirited attempts to level the social playing field, and that, of course, is just another form of bullying.

All of this attention to bullying may be a good thing for a wide range of very real victims.  It helps teachers and students identify and stop real bullying, hopefully before it does serious psychological damage.  But will the anti-bullying craze eventually become counter-productive?  Will we eventually become desensitized like the townspeople who ignored the boy who cried wolf?  The more we holler that everything is harassment, will real and serious bullying cases start to get lost in the shuffle?

Maybe the real bullying threat is posed by the hovering adults who, for fear that Little Johnny might scrape a knee or have his feelings hurt, orchestrate and insulate every aspect of Johnny's life.  Every childhood interaction must be structured and supervised.  From preschool play dates to individual (rather than group) bus stops to organized sports, children are barely allowed to interact without adult input.  Like helicopters, parents hover over every single thing their kids do, sterilizing their environments from all possible adversity.  They've banned dodge ball and tag and kickball to prevent "bullying" (which is really just kids picking teams and learning to settle disputes... you know?... life skills).

We have children's sports leagues that play but don't keep score... so everyone is a winner.  Or else, league standings aren't made public so the last place team doesn't get offended.  And because we've attempted to create a homogeneous society for our kids, where personal achievement and competition are non-existent, every kid gets a participation trophy.  We wouldn't want to hurt any feelings.

We have parents who swoop in to confront teachers about their children's bad grades, or schedule appointments with their college-aged child's professors to discuss how evilly they are treating their baby, or attend job interviews to ensure their adult child gets a good job.  This actually happens.

After all the attempts to whitewash the unfairness out of life, we're left with a generation that doesn't know how to fail, a generation that thinks everything is easy and guaranteed.  We have college graduates stepping out of college expecting to be handed their $100,000 starting salary, and are shocked that life doesn't work that way.  The concept of hard work and self-improvement is beyond them.  And when they find themselves stuck in crappy entry-level jobs, they demand an increase in minimum wage... because, damn it they deserve it... even though they haven't actually accomplished anything of value.

There are bullies in the adult world, too.  I've dealt with them in the form of employers and co-workers and neighbors.  Life isn't fair, even when you are a grown up.  Yet we're pushing kids out into that real world without the life skills they need to succeed.  Growth most often comes through adversity, but their insulated, sanitized, childhood bubble hasn't prepared them to be successful, well-adjusted adults.

It wasn't all that long ago that playgrounds weren't fenced, and children weren't taken from their parents for playing outside unsupervised, and kids were free to organize impromptu games of stick ball.  Not so very long ago, losing teams worked harder instead of whining about losing, students learned to suffer through terrible teachers, and bullied kids learned to stand up for themselves instead of hiding behind Mommy's skirts.  And some pretty important life lessons were learned in the process.

Perhaps instead of focusing so much attention on eliminating even the slightest bit of emotional or physical intimidation from our children's lives, we should focus on creating confident, positive, problem-solvers. (Interestingly enough these are traits that both bullies and victims lack.) I understand that parents mean well, that we all love our children and want to protect them, but sometimes the best thing we can do is let them fight their own battles.  We can't continuously rob them of opportunities to learn conflict resolution and effective communication (through actual application not just theory), and in the process develop improved self-esteem and a sense of empowerment.  And maybe they  might figure out in the process that their worth isn't wrapped up in the positive opinions of others.

Adults should just step out of the way instead of constantly feeding a victim's mentality to our kids.  Our children might need to suck it up, toughen up, and figure out how to fix their own problems.  I think we'll have better adults for it, even if the process isn't all sunshine and roses and rainbows.  But I bet there will unfold stronger, more resilient humans better equipped to face the often harsh realities that are inevitable in this world, because guess what... the world isn't all sunshine and roses and rainbows either.
Posted by Alice Jones Webb at 3:22 PM